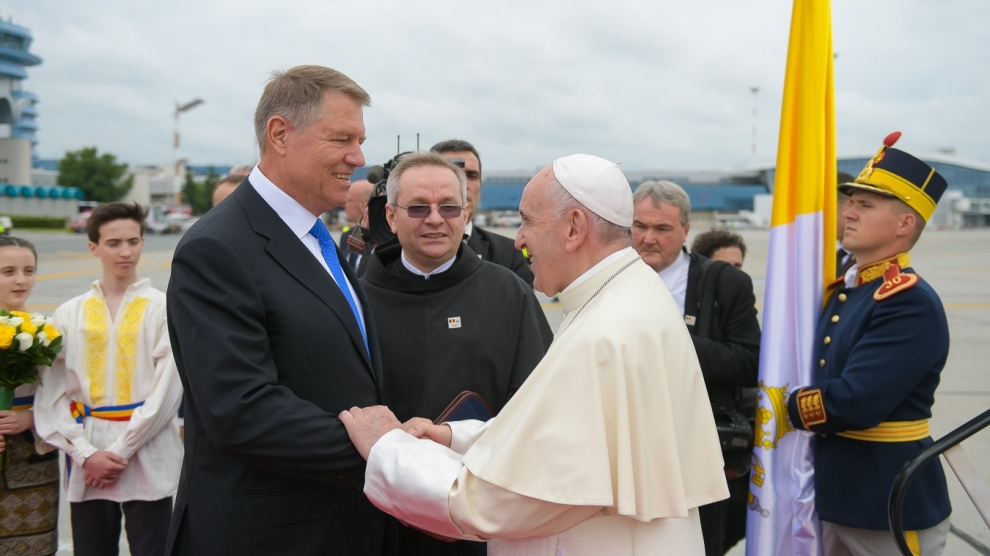 Pope Francis has paid tribute to the Romanian diaspora on the first day of a landmark three-day visit to the overwhelmingly Orthodox country.

“Through their values, their culture and their work, they enrich the countries in which they live,” said Pope Francis, referring to the almost three million Romanians who now live abroad. “The fruits of their labour also allow them to help those family members who have chosen to remain at home.”

In a speech at Cotroceni Palace, the official residence of the Romanian president Klaus Iohannis, the Pope indirectly called on Romania’s leaders to create a society that will end migration.

“Positive forces – political, economic, social and spiritual – must unite to find a solution to confront the difficulties the modern world poses. There should be no let up in the attempt to achieve the most noble of all goals to which a state must aspire: to care for all its people for the common good. The more a society cares for its most disadvantaged members, the more it demonstrates its level of civilisation,” he said.

The Pope later prayed at Bucharest’s new Orthodox cathedral with Patriarch Daniel, the leader of the Romanian Orthodox Church. On June 1 the Pope will travel to Transylvania, and on Sunday, June 2, he will take part in a pilgrimage to Romania’s most famous Catholic shrine at Șumuleu Ciuc. There, he will beatify seven Catholic bishops who were martyred during communist rule.

Catholics make up about five per cent of Romania’s population of 20 million people. The vast majority of the country’s Catholics are ethnic Hungarians. Pope Francis is the first pontiff to visit the country since Pope John Paul II in 1999.