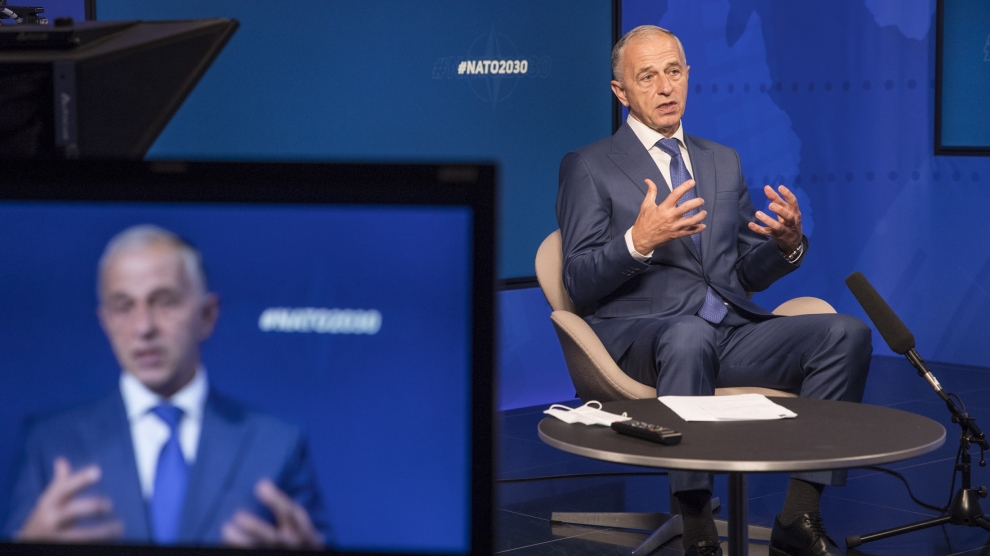 NATO Deputy Secretary-General Mircea Geoană (pictured above) has said that the Covid-19 pandemic has led to a “hyper-acceleration of history”, and that like all major turning points, it presents both challenges and opportunities.

“I come from a region that for a long time lacked freedom, and dignity, which is why I believe that at these difficult moments we should return to the values and foundations of what we have built. The NATO alliance represents one billion people and 50 per cent of global GDP. We are a formidable force and we must stick together and harness our strengths,” said Mr Geoană, a Romanian.

“But we must also look at our weaknesses, which this pandemic has exposed. At NATO we have been working on boosting resilience, from energy to infrastructure, from military-civilian cooperation to natural disaster response. And all of the NATO members in Central and Eastern Europe have contributed a great deal, helping to create the unique set of tools that we now possess.”

To meet today’s challenges, and threats, it is important that countries on both sides of the Atlantic need to remain united, he added.

Mr Geoană pointed to his own appointment – he is the first senior NATO official from emerging Europe – as an example of the region’s increased importance, and its potential.

“The number one conclusion from this pandemic is that supply chains need to be shortened. This creates a huge opportunity for reshoring and nearshoring to our countries in emerging Europe. This could also be a chance to address the problem of migration: it’s great to have Romanians, Poles in Silicon Valley, but we also need to make sure that we nurture our own unicorns.”

Discussions covered a number of topics, from innovation to infrastructure and healthcare to finance, but it was the impact of the Covid-19 pandemic that unsurprisingly dominated proceedings, and which was the theme of the headline debate: Never let a crisis go to waste.

Marcus Heinz, representative for Poland and the Baltic States at the World Bank, spoke about the vast impact of the Covid-19 crisis on the region.

“For Central Europe we can currently see GDP shrinking in 2020 by about five per cent. The share of the population at risk of poverty could grow to 18 per cent in 2020,” he warned.

Low wage, unskilled workers, and young people are especially vulnerable, as are women: one in five will face difficulties returning to work, as opposed to just one in ten men.

“These are the people we need to think of first when we devise measures to shield vulnerable households from the storm,” Mr Heinz added.

There was unanimous agreement that business and the private sector will need to play a key role.

“In order to restore public and economic health and get to the next level of resilience, we need to involve business and civil society. Governments cannot do it on their own,” said Anthony Kim of the Heritage Foundation, who also pointed to the significance of US-European cooperation.

“This global health crisis highlights the importance of transatlantic relationships. We need to talk, we need to compare notes, we need to map the way forward,” he said.

Marek Dietl, CEO of the Warsaw Stock Exchange, said that the way businesses evaluate risk will have to change.

“Businesses and policy makers have been too focused on avoiding risk,” he said. “They should look at those companies which have been the most resilient during this crisis: agile firms who were equipped to react quickly.”

Where there has undoubtedly been progress in the emerging Europe during the Covid-19 pandemic is in the quick adoption of digital solutions. Digitalisation has been an ongoing, and often slow process in the region for some time: the necessity created by pandemic has accelerated it., with both the government and private sector moving towards digital tools at a rate much faster than before. Schools switched to distance learning, medical facilities began incorporating telemedicine, and e-government services were launched to help people deal with administrative issues that pandemic lockdowns might otherwise have made impossible to carry out.

“We have seen an unprecedented pace of digitalisation,” said Marcin Petrykowski of S&P Global Ratings and Amcham Poland. “In the course of the last six months we’ve gone through a revolution that has strengthened digital business.”

Incorporation of ESG (Environmental, Social, Governance) standards is another way that firms could increase resilience, according to Irena Pichola, a partner at Deloitte, who pointed out that as companies move forward they should “find ways to bring more stakeholders to the table”.

“I think the crisis has led to clear conclusions in boardrooms,” she said. “Directors are much more aware of the need to guide their organisations with consideration for the impact they have on wider society.”

In all of the issues raised by panelists, it was clear that emerging Europe as a region still has a lot of catching up to do, and could do well to look across the Atlantic for best-practice examples. As the Warsaw Stock Exchange’s Mr Dietl put it, “less bureaucracy and more free markets”.

The last word went to Marcin Petrykowski, who echoed the need to learn from the United States.

“What the US does very well is blend private and public money, allowing business to piggyback on public initiatives. In our part of the world we do not get it right yet. We need to learn from the US about how to create long term impact for society.”