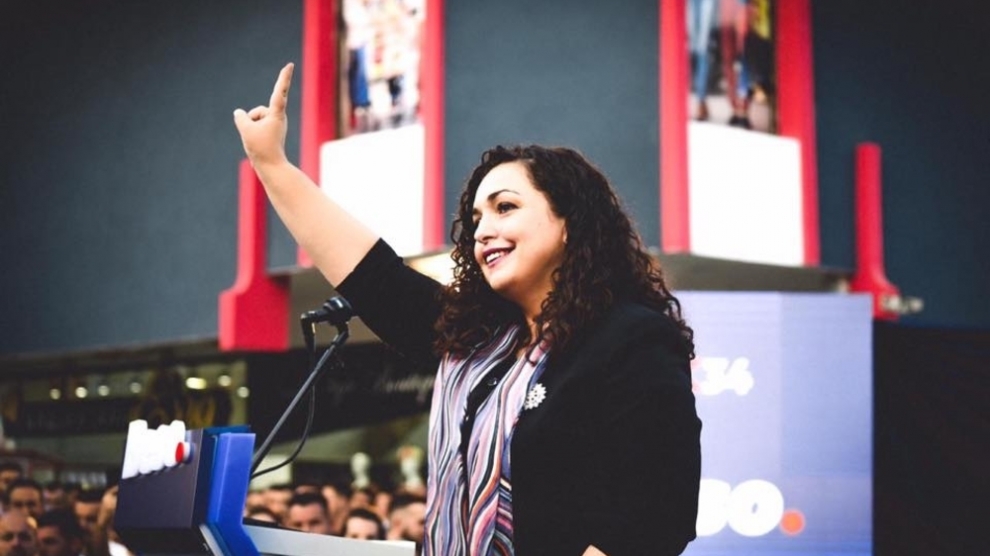 The appointment of six women to cabinet posts in the new government of Kosovo represents a landmark moment in the young nation’s history.

The six are led by Vjosa Osmani of the Democratic League of Kosovo, the speaker of Kosovo’s parliament.

In addition to Ms Osmani (pictured above), five more women have taken prominent positions in the government. The ministers of economic development, justice, education, culture and local government are all women.

While the nation did previously have a woman as president, Atifete Jahjaga, who served from 2011 to 2016, there have been few other women in positions of power in Kosovo.

Now, there are more women in the government than ever before. Prime Minister Albin Kurti’s new government has the largest percentage of women since independence was declared in 2008.

Kosovo’s previous governments were led by former Kosovo Liberation Army commanders. In fact, the snap election last year which led to a change in government was triggered by Ramush Haradinaj leaving his post as prime minister after being summoned by the war crimes tribunal in The Hague.

These governments were plagued with issues of corruption and nepotism.

But Ms Osmani has a plan to deal with that.

“It’s time for politicians with clean hands, no links to crime and corruption, to lead this country,” she said.

Born in Kosovska Mitrovica, she graduated high school in her hometown. She then studied at the in Prishtina where she also worked for UNMIK, the United Nations Mission in Kosovo.

Osmani continued her work with various international organisations such as the Red Cross and USAID before landing her first political job in 2006. She became the the chief of cabinet for Kosovo’s then president Fatmir Sejdiu.

Since then, she has built a reputation of being “loud in a good way” for her open and incisive criticism of both her political opponents and the leadership of the party she belongs to.

Gender issues are at the forefront of her politics.

“Every single law that comes to the assembly should be seen through the gender lens. You will see us talking and fighting for gender equality, no matter what the topic in the assembly and in the government is,” she says.

With the appointment of Osmani and the five other ministers, many in Kosovo are hoping that some of the country’s long-standing gender issues will finally be addressed.

These issues include domestic violence, health, education, and employment. Kosovo has long had issues with a high unemployment rate which currently hovers around 25 per cent, but the situation is even worse for women.

According to the Riinvest Institute, a think thank based in the country, only 18 per cent of women are actually employed. This is the lowest percentage in the region, and one of the lowest in the world.

“That is why the government programme, which we drafted together, focuses quite a lot in creating such conditions for women in our society to find a job and get economically empowered,” Osmani says.

The new government in Kosovo has taken some practical steps too. When reports emerged out about the poor treatment of women who are pregnant or on maternity leave, around 400 inspectors from the ministry of labour were tasked with dealing with the situation. Previously, there had only been 10 such inspectors for the whole country.

Other issues the government will face include moving forward with cases of rape during the Kosovo War. The cases which are now two decades old have seen no progress with not a single perpetrator being jailed.

Ms Osmani met with the representatives of Kosovo Women’s Network (KWN) in February to discuss all these issues.

KWN is a network of 150 different groups that advocate for women’s rights and gender issues in the nation.

During the meeting, Osmani expressed appreciation for KWN’s commitment to protecting the rights of women and girls.

The meeting concluded with Osmani promising to support KWN in its bid to establish a separate budget for domestic abuse shelters and to restart a debate over labour laws, maternity and paternity leave.

Igballe Rugova, the executive director of KWN, has praised both Osmani and the five female ministers in the new government.

“I felt like this is an independent government chosen by us. They are listening now and acting,” Rugova says.

With gender issues at the forefront and more women in government than ever before, Kosovo is entering a new chapter of its political history.

But old bugbears follow closely. Unemployment, the continuing row with Serbia – which does not recognise its independence – and an economy that is growing but still remains one of the poorest in Europe mean that the entire government has its work cut out. Kosovo’s women, however, so far look up to the challenge.