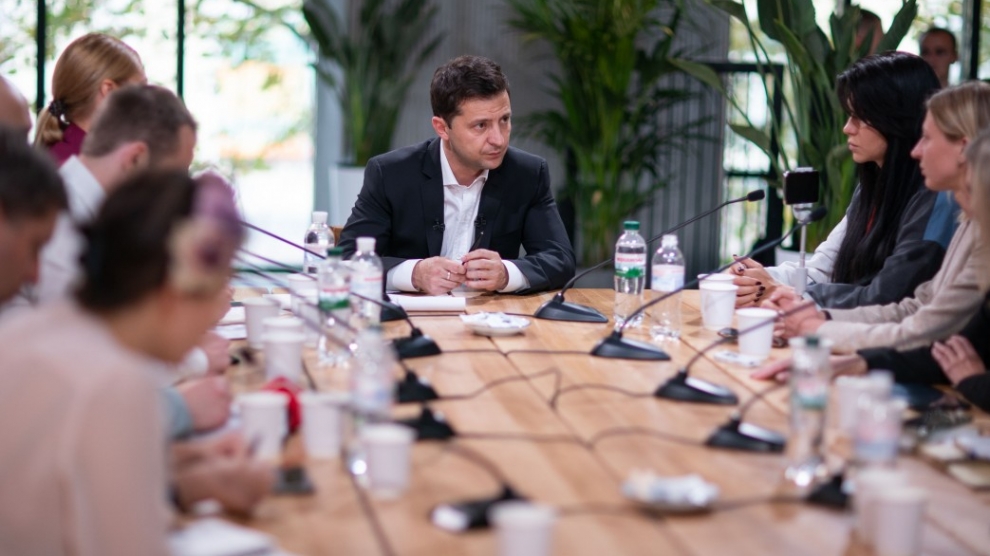 Local elections in Ukraine’s war-torn Donbas region will be possible only if they are held in accordance with Ukrainian law, with the participation of Ukrainian political parties, as well as the withdrawal of all Russian troops and the disarmament of illegal military forces, Ukrainian president Volodymyr Zelensky has said.

Speaking at a record-breaking 14-hour-long press conference with 300 reporters, Mr Zelensky rejected the criticism he has faced over supporting the so-called Steinmeier formula, a conflict settlement plan to end the Donbas war that would allow eastern Ukraine to have a permanent special status if local elections are conducted in line with international standards.

“I want to remind you which president society elected – they elected a president who will end the war. That is my mission,” he told journalists on October 10.

He stressed that a meeting with the Russian president Vladimir Putin was inevitable to agree on a long-term solution for the war, adding that the date of the long-awaited Normandy summit between France, Germany, Russia and Ukraine, which he predicts for November, now depends on the Russian president.

He also noted that situation of Crimea, the Ukrainian peninsula that was annexed by the Russian army in March 2014 should also be settled during the Normandy talks.

Discussing his July 25 phone call with US president Donald Trump that is now at the centre of a US congressional impeachment inquiry against his US counterpart, Mr Zelensky denied that he had known whether US military aid for Ukraine, previously approved by the US Congress, was withheld by Mr Trump at that time.

“The call could not affect our relations with the United States. We had several calls with the US president. I perfectly understood that the task was to make the best out of these tired relations between America and Ukraine,” wrote RBC Ukraine, quoting the Ukrainian president.

While Mr Zelensky again insisted that he had felt no pressure from the US president, he said that Ukraine should investigate Ukrainian interference in the 2016 US presidential election, something that Mr Trump requested him to do.