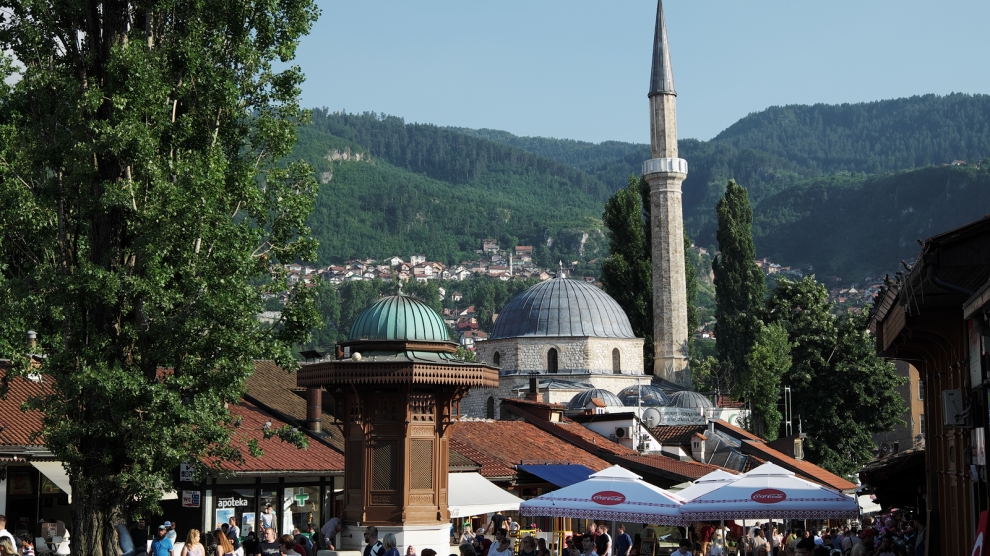 The economy of Bosnia and Herzegovina (BiH) reported decent average real GDP growth of 3.1 per cent year-on-year from 2015-2018. Nevertheless, average growth of 3.1 per cent is still below the level of some peers in South-Eastern Europe (SEE), and still far below an expansion that would allow for a vigorous convergence towards EU income levels.

GDP per capita in Purchasing Power Parity terms was at 31 per cent of the EU average in 2018, which is at the bottom of the list of peers along with Albania. It is therefore necessary for the economy in Bosnia and Herzegovina to develop new growth drivers (such as tourism) in addition to its traditional strengths – some of them in manufacturing.

In line with our expectations, economic momentum decelerated considerably in Q1 2019, down to 2.2 per cent year-on-year in real terms (preliminary data). This move was mainly triggered by a weak global trade environment that has also hit the economy inside the EU.

Economic data in H1 2019 for BiH showed weak exports of goods followed by disappointing industrial production readings which slipped into recessionary territory in H1 2019 – for the first time since 2012. However, these two heavyweight indicators (~21 per cent and 30 per cent of GDP) were also affected by one-off effects, such as production disruption at big export players like Gikil (the shutting down of a key coke producer/exporter) or Prevent CEE (a component producer with a focus on the German car industry). Moreover, state-owned electricity producers (Eletroprivreda BiH, Elektroprivreda HZHB) were affected by negative meteorological circumstances and the repair of several facilities, which pushed electricity production and exports deeply into negative territory.

In addition, ongoing uncertainties at an ailing and heavily indebted major company (Aluminijum, a state-owned giant and producer/exporter of aluminum), put additional pressure on the industrial sector. Therefore, our 2.7 per cent year-on-year real GDP growth call for the full-year 2019 is exposed to material downside risks.

Despite that, domestic demand remains resilient, driven by a revival of infrastructure projects in the context of the EU-funded Corridor Vc. Therefore, private investments will again contribute to a solid expansion of gross investment in 2019. This is positive news and illustrates that the EU Connectivity Agenda for the Western Balkans (within the Western Balkans Investment Framework) shows positive effects in the real economy on the ground. T

he commitment to this process, including financing the Corridor Vc, was re-confirmed at the most recent EU/Western Balkans summit in July in Poznan. Not to forget that such EU investments are also key to counterbalance the narrative that the EU loses out to China on the Western Balkans. Moreover, private consumption is vibrant, driven by high real wage growth, a stable and substantial inflow of remittances (12 per cent of GDP, driven by a large population working abroad), vigorous growth of retail lending (6-7 per cent year-on-year) plus growing tourism revenues (12-15 per cent year-on-year). Moreover, state consumption remains stable and positively backed by robust growth of tax revenues. That said, BiH is characterised by a very solid public sector balance sheet, with an overall budget surplus of one per cent of GDP and public debt levels (in line with ESA standards) of 33.8 per cent of GDP in 2019.

Solid public finances are also a result of a long-standing cooperation with the IMF through several arrangements. In addition, successful IMF cooperation also increases the EU’s willingness (and the one of other IFIs) to make substantial financial commitments.

As such, we believe that the opening of a new International Monetary Fund (IMF) arrangement in early 2020 is not in question after the recent agreement between key political parties regarding the composition of the State Council of Ministers. The Council shall be fully functional in Q4 2019, a scenario that will also be welcomed by the European Commission and the EC’s Department for Neighbourhood Policy and Enlargement.

The IMF and the EC are the key structural and economic reform agents in the country and we believe that in the mid- to long-term, policies will continue to be mainly shaped by these two players – even if full EU membership remains only a distant option. At present, Bosnia is not yet an official candidate for accession. Given the political complexity on the ground and based on certain experience in other more complex accession processes (like Cyprus from 1990 to 2004 or Croatia from 2005 to 2013), Bosnia’s EU accession process could probably take at least eight to 10 years.

The most important areas of IMF/EU-supported reforms during the ongoing EU rapprochement are in the areas of democracy, rule of law, prevention of corruption, fundamental rights and public administration reform, privatisation, public state companies restructuring, pension/health systems reform plus reforms targeted at the improvement of the business climate. 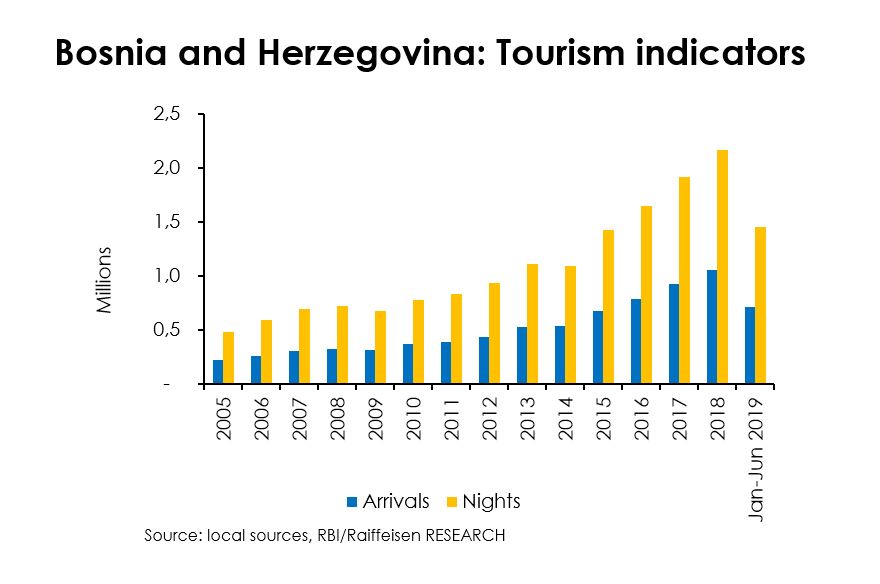 Even though BiH is occasionally associated with political turmoil in the perception of media and investors (mainly driven by complex administrative structures and skirmishes between the various state entities), there are also many positive stories in this small and diverse economy, which has proved over the last decade that it has many comparative advantages and yet undiscovered economic potential.

Beside its traditional industrial strength in export-oriented sectors (metal processing, automotive, wood, furniture or electricity production; exports of goods to the EU are at 75 per cent), BiH has become more visible on the tourist radar. BiH is one of the fastest growing tourist destinations in Europe, seeing 14.1 per cent year-on-year growth in 2018, according to the World Tourism Organisation. The total number of tourist arrivals reached one million. In addition, BiH is recognised as one of those countries with the potential to be among the 10 fastest growing tourist destinations in Europe until 2025.

BiH has been recognised as a country with huge potential for city break tourism in Sarajevo and Mostar due to their cultural and historical significance, at the crossroads of Eastern and Western heritage, culture, religion and architecture. Furthermore, there are great spots for activities like skiing, hiking, cycling and rafting, where visitors can meet locals, witness their traditions and live meaningful experiences. In addition, religious tourism to the well know pilgrimage site at Medjugorje is also on the rise. While some estimates suggest that close to one million arrivals could be tracked to Medjugorje alone, most of these are unfortunately still not officially captured by official statistics due to the extent of the vast grey economy.

Looking more into economic data from 2015 to 2018, BiH has been reporting 18.5 per cent year-on-year growth in tourist arrivals which should be close to 12-15 per cent year-on-year in 2019 when the country is expected to hit a new record of 1.2 million arrivals and almost 2.5 million overnight stays. In economic and financial terms, tourism has a rising share in terms of GDP and plays an increasing role in being an important revenue generator and source of financing of the country’s C/A balance. The revenues from exports of tourism services in the country’s balance of payment (BoP) also hit a new record of BAM 1.5 billion in revenues in 2018 equivalent to 4.77 per cent of GDP, while the service account surplus in external account statistics peaked at BAM 1.4 billion or 4.4 per cent of GDP. 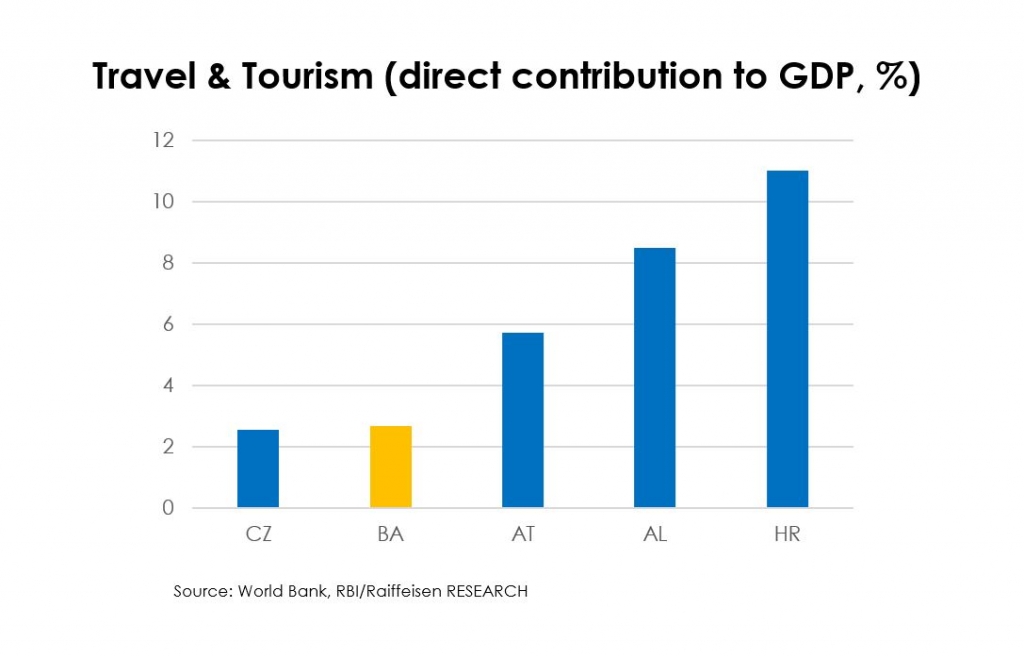 Currently, travel and tourism account for about two-three per cent of GDP in BiH (approximately the same level as the Czech Republic), while in countries such as Austria, Albania and Croatia the respective figures are five-six per cent, seven-eight per cent or even 10-11 per cent in the case of Croatia.

These figures show that there is growth potential. Hence, from a mid-term perspective, tourism should become increasingly important for the C/A deficit reduction which in 2019 is forecast at -4.4 per cent of GDP, as well as an important driver of further increase in FX reserves, stability of the currency board arrangement and one of the forceful economic sectors of the country. Moreover, the outlook for a rather distant EU membership is certainly not the most decisive factor for the further positive development of the tourism sector, but a certain “felt” proximity to the EU is certainly important. After all, EU citizens prefer to travel within the EU (approximately 75 per cent of EU citizens’ holiday trips take place within the EU). In this context, it is of course important to emphasise that the entry to BiH for normal tourist stays can be done easily and without a visa. It should also be emphasised that the skirmishes between the various state entities at the political level, which often hamper the (economic) reform progress, do not in themselves jeopardise the overall stability in the country.

This article – which was first published at Discover CEE – was co-authored by Gunter Deuber, head of economics, fixed income and FX research department at Raiffeisen Bank International in Vienna.

Ivona Zametica is chief economist/head of research and advisory at Raiffeisen Bank in Bosnia and Herzegovina, Sarajevo.