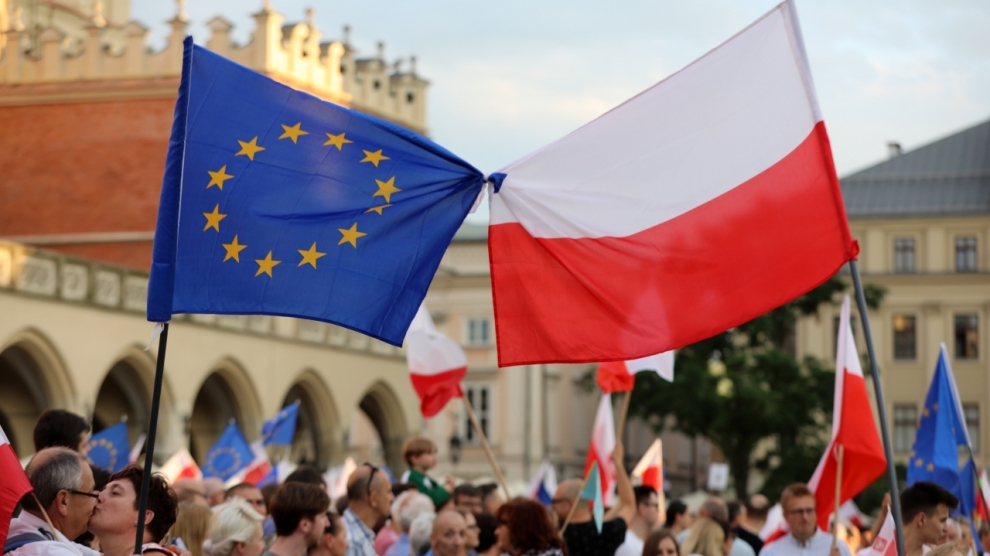 Of the 10 countries that joined the European Union 15 years ago, Poland is definitely an EU success story: it has become more outward-looking and confident as well as being socially and economically transformed. That is why 91 per cent of Poles support Poland’s membership of the EU.

The 2004 European Union enlargement, which allowed Poland (together with Cyprus, the Czech Republic, Estonia, Hungary, Latvia, Lithuania, Malta, Slovakia and Slovenia) to join the European Community, was both historic and symbolic. At the end of the World War II, Poland, despite its wartime efforts, contributions and sacrifices, suffered from being caught on the wrong side of the Soviet Iron Curtain. EU membership, 15 years after the end of the Cold War, sealed the unification of Europe, which had been torn apart by the communist regime for over half a century.

Poland has always been an important part of Europe. In 2003, the Treaty of Accession to the European Union was signed by Poland, nine other accessing countries and the EU members states. With the accession, Poland hoped for geopolitical security and development. We were therefore grateful when the UK welcomed us with open arms, becoming the first country to open its market to Polish workers as soon as we joined the union. Around 400,000 Poles registered to work in the UK after EU accession, strengthening even more the relationship between the two nations. Economically, Poland has been the largest recipient of EU cohesion funds, we have greatly developed our infrastructure and agriculture, and our exports to other EU countries have provided a boost to our economy. Thanks to the European common market, there has been a fast flow of technology, trade and investment, knowledge exchange, and free flow of capital, goods, services and people. According to the World Bank, Poland is one of the two fastest-promoted countries (the other being South Korea) in the history of countries that have been promoted from the middle-income to the highest-income group. Recently, Poland became the first Central and Eastern European country to be ranked a “developed market” by the FTSE Russell index, and is now one of the 25 most advanced economies in the world. The economic relationship between Poland the United Kingdom is well reflected in our trading relationship – worth 17 billion UK pounds a year. Meanwhile, since 2005, Polish exports to the UK have tripled and UK exports to Poland have doubled.

Just before 2004, most Europeans from the EU-15 (countries which joined the EU in 1995 or before) were convinced that the unification of Europe was a moral duty and that it was geographically and historically justified. This did not, however, translate into a mass support for the EU enlargement. But while many member states focused on risks associated with the process and emphasised that the EU was not ready for new members, it was the United Kingdom that saw opportunities, which the EU enlargement could bring. This optimism was shared by almost half of the British population. In the case of Poland and the United Kingdom, it resulted from a strong and long-lasting relationship between the two countries and the two nations. This year marks the 250th anniversary of the permanent  Polish diplomatic presence in the United Kingdom and 100 years of renewed UK-Poland diplomatic relations. The special relationship between the countries were especially significant during World War II when 250,000 Poles served with British forces taking part in many key campaigns, including during the Battle of Britain, with the 303 Polish Squadron becoming the most successful Fighter Command unit in the battle, shooting down 126 German machines in only 42 days.

Fifteen years in, we can clearly see the benefits resulting from Poland’s membership of the European Union: it strengthens the international position of Poland, while EU laws and regulations protect and bring significant benefits to Polish citizens and businesses.

After the end of the Cold War, Poland has played a stabilising role in the region of Central and Eastern Europe, for instance as part of the Visegrád Group – a cultural and political alliance of the Czech Republic, Hungary, Poland and Slovakia. Poland has also given back to the European Union and been an initiator of some very successful projects, including the Eastern Partnership programme, which was created to forge closer political and economic ties between the European Union and its eastern neighbours: Belarus, Moldova, Ukraine, Armenia, Azerbaijan, and Georgia. Poland also actively supports the European integration of the Western Balkans. We currently hold the presidency of the Berlin Process, after taking it over from the United Kingdom. Also, the Three Sees Initiative, with its member countries of Austria, Bulgaria, Croatia, the Czech Republic, Estonia, Hungary, Latvia, Lithuania, Poland, Romania, Slovakia and Slovenia, aims at working together in the economic sphere, particularly in the field of energy as well as transport and communication infrastructure.

As for Polish-British relations within the EU, we have been close allies working together within the EU since Poland joined. Both countries have assessed the threats coming from the East and pushed for the EU’s assertive position towards Russia, especially after the annexation of Crimea and the poisoning of Sergei and Yulia Skripal. In addition, both Poland and the UK share the same approach in terms of security policy, considering cooperation within NATO the main pillar of security.

Polish people are clear supporters of Poland’s membership of the EU. When the 2016 referendum results were announced, many people, including myself, were surprised and saddened by the outcome. We thought the UK – like Poland – would be better off inside the EU. But the bilateral cooperation between Poland and the United Kingdom was strong before then and it has continued to develop since with initiatives such as the civic society Belvedere Forum. The Polish people accept the decision of the British nation, despite the fact that Poland and the UK differ on their view on the EU membership, for we believe that in order for our relations to prosper, we need mutual acceptance and understanding. The upcoming European Parliament elections and their aftermath are a chance to show this and shape our common future – whether we are both part of the EU or not. As the Polish Prime Minister Mateusz Morawiecki recently said, the EU is not perfect and it needs to be reformed. I believe Poland will be a strong contributor to EU reforms as it has been a strong initiator so far.

Kosovars want to travel. Why will Europe not let us?
Profit with purpose
Comment