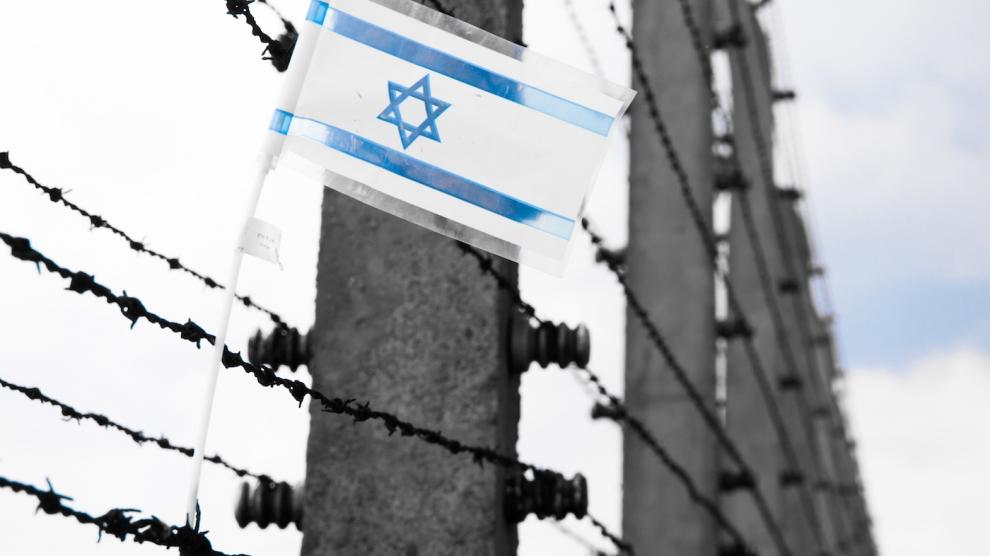 Israel, as an enemy, has been chosen perfectly. It is ruled by right-wing populists, so it has been possible to accurately predict the mirror mechanism of sharp reactions. And that is what Jarosław Kaczyński wanted.

Nothing consolidates power better than war. A war undermines any internal divisions within a country and removes all citizens’ claims to power. War also makes it possible to distinguish “patriots” from “traitors”. If your goal is absolute power, and costs are of no importance to you, then start a war. Of course, a war “for a just cause.” A war that you cannot lose. That is what rulers did in ancient times, and that is what rulers still do today: Putin (in Chechnya, the Crimea, and Ukraine) and Erdogan (fighting a war against the Kurds and more recently Syria).

It is easy to instigate a real war if you are a superpower or a backwater. Superpowers lead their wars on their own terms. On the other hand, wars fought by backwaters pass through the world unnoticed, so they can be fought for a long time and with impunity. Unfortunately, Mr Kaczyński’s Poland meets neither the first nor the second criteria. It is too small to wage a war on its own – unlike Russia or Turkey. But it is too large and too centrally located in Europe to start a peripheral conflict with a neighbour. It also does not have a national minority that it can grind down, to induce a small uprising which “the patriotic government of national salvation” could suppress with the support of the citizen-patriots. As a NATO member and a part of the European Union, it has numerous limitations. Real war is therefore out of the question, but a symbolic war may play the same role.

Jarosław Kaczynski needs such a symbolic war. His first attempt was a confrontation with Brussels. The PiS government did all they possibly could to evoke a strong reaction from the opposite side. Official propaganda, politicians and diplomats attacked Brussels officials and hoped that they would respond with aggression. In vain. The reaction was firm but remained calm. Society wasn’t fooled either. It finally became obvious to PR specialists working for the government that Poles faced with a choice between national pride and European funds would choose the latter.

Therefore, the PR specialists began to seek another war. And to probe who might be best suited for the role of an antagonist of Poland and the Poles. It is hard to love the Brussels bureaucracy but it is equally hard to hate it. Nation states are a much more grateful object of attack, because nationalism can be expressed symmetrically by both sides, and conflict can be quickly escalated, to the point of: “Can’t you see what they are doing to us?!” The enemy is necessary if we want to play (once again) the innocent victim in a credible way, and consolidate compatriots around the highest values: dignity and honour.

If we choose a country for an enemy, it helps not to be economically dependent on it. Painful economic sanctions can affect the sovereign’s life. Germany therefore is not suitable. It should not be a country that could realistically threaten us militarily either. The Poles’ fear of any consequences would undermine the desired effect. So Russia is also out. It would be good if war hatred could be based on genuine resentment: barely healed wounds, freshly healed complexes, mutual injuries, unsolved grievances, historical reluctance – this is the ideal. So it could be Israel.

The current conflict is not a strategic mistake made by Jarosław Kaczyński, nor an accident at work. Israel has been provoked into a symbolic war with full premeditation. I write this as a political marketing specialist who has been present on the scene of Polish politics for many years. What makes this thesis justified?

First of all, the Act on the Institute of National Remembrance (IPN) has been written in a way so that it is possible – depending on the need – to show two sides of the same coin. To say, for internal use, that this all about a legitimate postulate to remove the concept of “Polish extermination camps” from the global debate. Everyone will agree that this is right! And, for external use, to irritate the Jews to the highest possible degree, suggesting imprisonment for any accusations that Poles took part in szmalcownictwo (blackmail) or pogroms. This provision of the Act was to enrage Israel.

Secondly, the amendment to the Act was passed on the eve of the International Day of Holocaust Remembrance. It would be difficult to choose a better time to provoke reaction.

Thirdly, Prime Minister Morawiecki talked with Prime Minister Netanyahu about the necessary consultations regarding the Act, and after that the Senate approved its content without amendments. Israeli ambassador Ms Anna Azari was invited by the speaker of the Senate for a discussion two days later, when there was nothing left to talk about. It seems clear that a lot was done to maximize offence. Not only was public opinion in Israel enraged, but every possible attempt was made to humiliate Israeli diplomacy.

This is the war that cannot be lost

The effect of the Act has been so profound that the phrase “Polish death camps” on Twitter itself on 27 January was typed 25 million times. If we sum up posts from all social media, the numbers are striking. And the Polish government did not prepare an answer. Readers interested in the subject now have no chance to learn the historical truth, they can only read about the controversies. A total disgrace. Not that this matters, because the fight against defamation was not the goal of the legislation. No information materials on this subject have been prepared. Even instructions for Polish diplomats were not sent out on time. Nothing. For the purpose of internal propaganda, it will be claimed that this is about “Polish extermination camps”. And our homeland will be presented in its favourite pose of the eternal victim of aggressors or, even better, of international conspiracies. And it is of no importance that Israel has a grudge for something completely different. In the surge of patriotic feelings, nobody thinks about details. Perfect. In the world, nobody understands why Poles do such things. In Poland, nobody understands why the world holds a grudge against us. Also good, because such a war cannot be lost!

Israel, as an enemy, has been chosen perfectly. It is ruled by nationalist, right-wing populists. They are even more patriotically driven than we are. The Knesset is already working on a symmetrical act. Poles on the beaches of Israel are being pebbled and attacked with words: “A good Pole is a dead Pole.” In Poland, “Super Express” publishes the title: “This is what the Jews want from Poland: forests, factories, and a trillion zlotys as well.” Jokes about Jews in crematoria are told on public television. In Zielona Góra, on a board commemorating the burning of the town’s synagogue by the Nazis, the inscription “Jude raus” appears. We ourselves put on an ugly mug of anti-Semites and Hitler’s silent accomplices. Well… the spiral of mutual hatred has been set in motion. Everyone plays the role assigned to them.

Neither did Mr Kaczyński miscalculate the reactions of the “internal enemy” either. Most of the opposition abstained from voting (129 MPs, PO, N and PSL) or voted for (18) the Act, while only two (sic!) voted against. As such, the opposition loses its right to criticize the government on this matter and – what is even worse –excludes itself from the discussion. A discussion which will be the most important of the coming months.

The next steps are simple. Speaker Karczewski called on the Polish community abroad to support Poland in the conflict. The homeland is in need! Jarosław Kaczynski has indicated the stakes are high –  dignity! “We will never renounce our dignity!” In this simple way, the opposition was excluded from public discourse. In the war for dignity – and this is how the government’s PR specialists present the matter –  there can only be Poles and traitors. The wheel of collective identity has been set into motion and it leaves the nation equally consolidated around its only leader. The party’s reputation is soaring.

Kaczyński is not an anti-Semite. He never was. He plays with Polish prejudices, fears and stereotypes dispassionately, instrumentally, with premeditation. With this symbolic war – his ultimate weapon – not only does he eliminate the opposition and bursts into the centre of the political scene, but he also neutralises the right-wing extremists who have no choice but to play the role of nationalistic provocateurs. There can be only one leader during a war. All divisions must go away. The slogan of the right, which until recently had seemed absurd: “We do not exclude anyone, because there are only Poles and traitors,” is now how the “community” is perceived. On the other side, Prime Minister Netanyahu is like a mirror image of Kaczyński. He is under pressure, because there will be elections in Israel soon, and every vote counts. As Leo Tolstoy said: “War is nothing but a dispute between governments for the power over subjects.”

This opinion editorial was originally published on Gazeta.pl and has been reprinted with permission.

Jerzy Bierzyński is a sociologist, entrepreneur, investor, commentator on the media market and social issues, and the CEO at OMD media house.