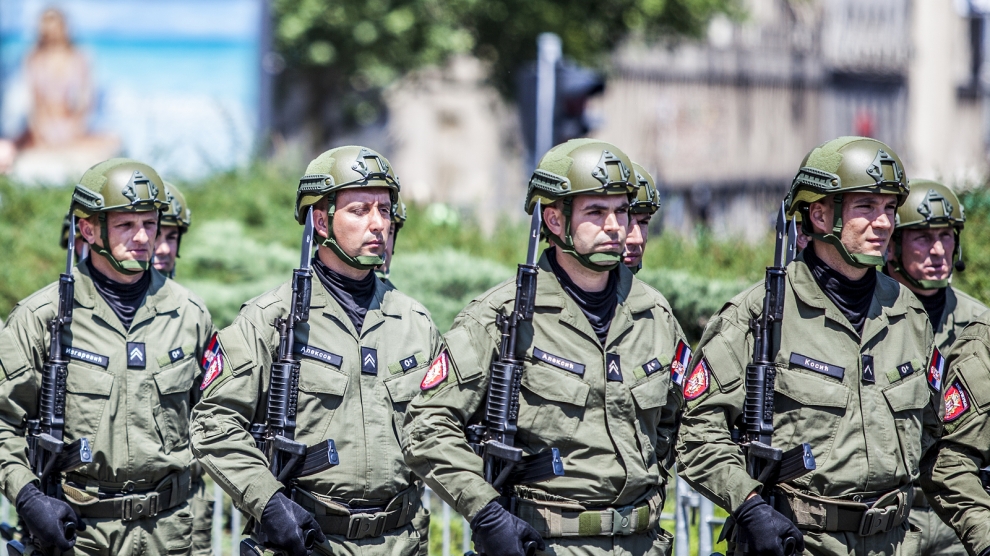 It is our common cause to continue making and shaping history with our project for a Europe that is united, prosperous and at peace. Peace and freedom are today being tested, confronted. We witness the worst security situation since the end of World War II. We see fundamental differences between world and regional powers. National borders and international principles are questioned. We witness a more and more dysfunctional international system where world and regional institutions and powers are unable to prevent and solve a record number of conflicts. In many regions war and terror prevail. States and institutions disintegrate. Today borders are making a comeback. The same generation that brought down the Berlin Wall is building new walls in the very heart of Europe.

Today the world is out of balance and it will take time to find a new one. Today, power in the world is shifting and changing.

Many predict a new, second Cold War. I truly believe that we are not heading into a new Cold War; the situation today is not a replica of what happened in the past. We are not in a time of a new Cold War, but we are in a time of Cold Peace. Five years ago, at the Munich Security Conference, I pointed out that Europe had entered a new period. The Ukrainian crisis was the game changer. We have entered a new phase of development, which I call Cold Peace. Peace, because nobody wants a war, but Cold Peace because we see confrontation and the methods from the Cold War – propaganda wars, cyber-attacks, proxy and hybrid warfare. And some countries have been destabilised and weakened through frozen conflicts.

We are living in turbulent times, because world and regional leaders demonstrate different approaches and different goals in politics. A lot of international leaders pretend to be strong, but not many of them are wise. You can have a very strong army or propaganda machine, but I don’t think it is wise to occupy and destabilise your neighbour from long term perspective. The cause of wise politics is to modernise, to educate, to give way to diplomacy and not to fight. But if you do not have a cause, you need a war, you need a convenient enemy. It is easy to destabilise. States can be broken easily by powerful neighbours. But broken societies can only be repaired by people, not by Great Powers. You can quickly destroy order but it takes a lot of time to rebuild it. Unfortunately, this is exactly what we see today in parts of Europe – frozen conflicts and occupation. In the 21st century it is not wise to move borders, but to think beyond borders. The goal of wise politics is to make a nation educated and prosperous, to empower citizens, to create societies that are free and tolerant.

Peace is not given and it is up to every one of us to protect it. Peace is not just the absence of war. Peace is human rights, peace is the rule of law. In the 21st century Europe’s disagreements should be solved in parliaments, not on battlefields. The European integration project is making this dream a reality.

Of course, Europe today cannot be an island of stability in the ocean of world instability. The EU is facing a record number of crises. Additional crises are on our radar screen, for example Brexit, the rise of nationalists and populists, migration and others. We must not allow Europe to fall into a moral crisis – a crisis of lack of solidarity, a crisis of questioning our values, a crisis of forgetting who we are and what we stand for. Whether it is migration or sanctions against Russia – we need to stand and stick together. We are a family. A family in a crisis stands together And every member of the family has to contribute, to solve and not deepen the problems.

The EU has unique significance and strong political legitimacy, because of the peaceful discussions and settlement of differences, because of the shared fundamental rights and rules, and because of the unprecedented level of cooperation between all member states. The EU is a unique project for peace where every nation is important. No state is peripheral or subordinate. The problems of migration, terrorism, climate change, economic crises and others go beyond our borders. These problems are transnational and require joint efforts. Cooperation is no longer a matter of choice, but of necessity.

Rosen Plevneliev is a former president of Bulgaria and honorary chairman of the Emerging Europe Alliance for Business Services, Innovation and Technology.