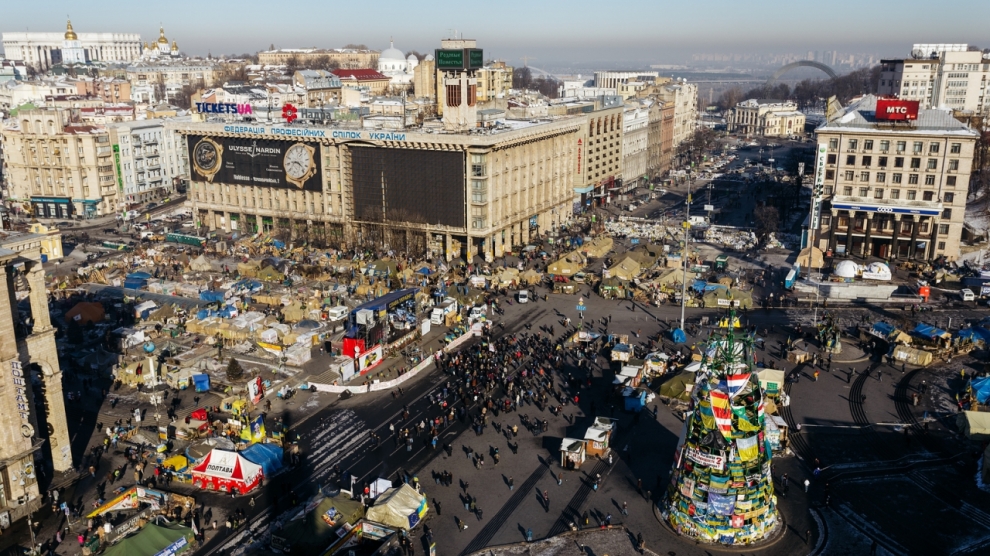 Since the annexation of Crimea and the beginning of the ongoing war with Russia, Ukraine has been branded as a villain seeking foreign assistance. With National Bank reserves of 5 billion euros and a public debt equal to 80.2 per cent of GDP, Ukraine will have to repay 38 billion euros of EU loans over the next five years. As with people, help from the outside usually brings bad results if there is no incentive to take responsibility over one’s own future by reflecting on past mistakes. So what went wrong for Ukraine – and when?

When the Russian and Austro-Hungarian empires fell in 1917 and 1918 respectively, Ukraine, which had been split between the two for more than one hundred years, entered a short era of anarchy. Because of the fact that there were too many people and unions, who wanted to obtain the power over Ukraine’s territory, and each had a different agenda, none of them succeeded. As a result, the Russians took the opportunity and occupied Eastern and Central Ukraine, while other parts were divided between Poland, Hungary and Romania. Since the Soviets had managed to monopolise power over the bigger part of Ukraine, it can be said that at this time Ukraine’s path from anarchy to a centralised state begins.

In a short period of time, the USSR succeeded in establishing a very harsh tax system and an extensive bureaucracy over Ukrainian territory, otherwise known as the Ukrainian Soviet Socialist Republic. The Constitution of 1918 and lots of other laws and regulations aiming to reach the communist ideal were passed. The next step made towards centralisation of power was the development of infrastructure followed by the establishment of huge public enterprises.

When, in 1939, the Second World War broke out, the Soviets occupied Poland and as a result western Ukraine was ‘reunited’ with the rest of Ukraine under Soviet rule. Step by step, the system created in Soviet Ukraine was fully replicated in western Ukraine, though there it had faced enormous resistance. Due to the cultural, religious and/or political influences of the Austro-Hungarian Empire and Poland, western Ukraine was reluctant to give up its heritage and dissolve itself into the Soviet Ukrainian identity. The opposition movement was led by the Organisation of Ukrainian Nationalists, who were fighting against both the Soviets and Nazis. If we take as a premise Ukrainian territory as it is today and Ukrainians as the people inhabiting it, then this fight between the western Ukrainian resistance movement and the Soviet Ukraine, which lasted around 30 years, was nothing less than the biggest civil war in Ukrainian history – and it has dramatically affected the present.

For the state to become inclusive, it should overcome a power-sharing process as the last step. Even though the Soviet leaders had difficulties with it, they established three branches of government and a great number of organs, such as the KGB, within them. As with absolute monarchies, it was done mostly to satisfy the elite and keep them at hand, meaning that power was in theory dispersed yet still belonged to a single person. History provides many examples of what happens to countries that fail to make this final move of establishing an efficient system of checks and balances. Sooner or later the elites willstart plotting against each other and their leader, the pressure becomes unbearably strong and consequently a country turns into chaos and disappears from the world map, just as the USSR did.

In 1991, when the USSR burst into pieces, Ukraine, as its successor, inherited not only a territory with two absolutely different eastern and western Ukrainian identities, but also the legal and tax system. Unlike the Baltic countries which decided to start from scratch, meaning from anarchy to a centralised state and then to an inclusive one, Ukraine chose the seemingly easier route of simply carrying on with the Soviet system. Yet the most striking thing here is not the fact that Ukraine lacked intellectuals at that time to make it successful, but that former Soviet puppets monopolised power. Instead of writing something completely new and free, Ukraine just started a new chapter of the same book.

If cancer is identified in the early stages, it’s still curable. Ignorance usually has lethal results. The same can be said about the misalignment between power and identity in Ukraine, which stems from the historical, cultural and even political differences between the East and the West. Back in 1991, while choosing a vector of development, Ukrainian officials could have chosen between one of two options: to decentralise power to identity levels or to create unity by building a new, single Ukrainian narrative. Yet by turning a blind eye to the problem back then, they made it even worse, resulting in the deaths which occurred during the Maidan Revolution of 2014, preceded by peaceful demonstrations which started four years previously.

Countries don’t become free and prosperous in a day, and the past is meant to be reflected on. Regardless of two massive revolutions, Ukraine is still struggling to become a truly inclusive and free country. The economy remains very fragile with its 37.6 per cent overall tax burden and bureaucracy as extensive as it used to be half a century ago. The number of state-owned enterprises hasn’t outstandingly decreased and the proportion of companies owned by oligarchs is still the same in post-Soviet Ukraine. Decriminalisation of drug consumption and distribution as well as gun ownership is not even on the agenda. Moreover, politicians still fight the opposition and reward those who serve them well. Sounds familiar, doesn’t it?

The views expressed in this opinion editorial are the author’s own and do not necessarily reflect Emerging Europe’s editorial policy. Originally published on Austria Centre’s page.

Mariia Chaplia is Communications Associate Intern at Students for Liberty. She studied law at the Taras Shevchenko National University of Kyiv and global affairs at the Civil and Political School. She is a recent graduate of the Charles Koch Internship Programme.

Next Christmas in Belgrade? The EU’s Move into the Western Balkans
Assaults on the Judiciary: How CEE Governments Are Trying to Restrict Judicial Independence, and Why It’s Not Working… For Now
Comment