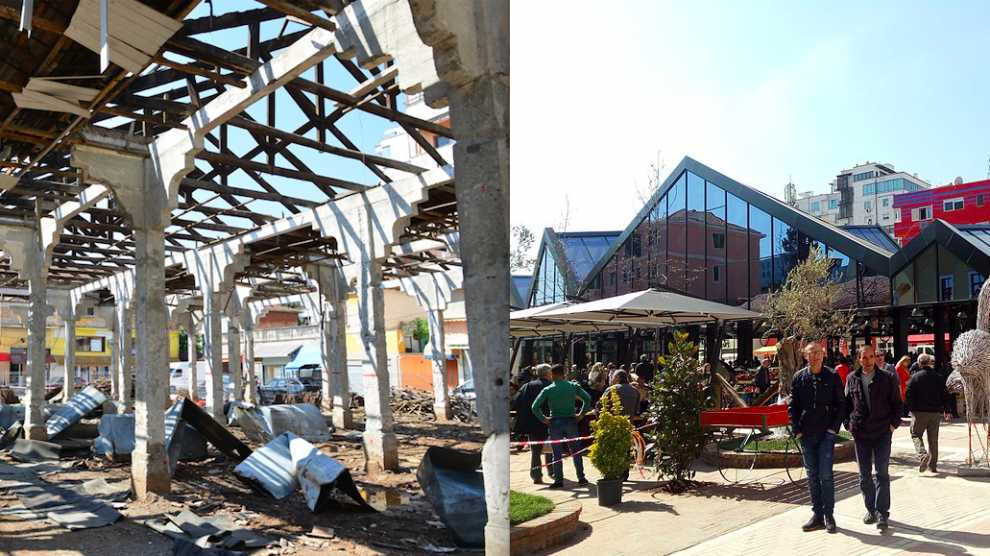 It is the capital of Albania, a small European developing country situated on the west coast of South-East Europe. The country has since 2014 been an EU candidate and accession negations to join the Single Market are expected to begin in earnest, alongside the creation of the Western Balkans Regional Economic Area modelled on the Central European Free Trade Agreement (CEFTA).

Tirana is increasingly being featured in important media outlets (such as Vogue and The Economist as a city undergoing rapid transformation – a renaissance – and becoming a lively and a must-visit destination. The capital’s status is attested by a boom in tourist numbers that are up 25 per cent since 2016 (according to INSTAT, the Albanian Institute of Statistics), as well as a steady increase of foreign residents (mainly from Italy), and the return of expatriates.

If you have not visited Tirana over the past ten years, you might not recognise the European capital now emerging. Albania, which frequently tops lists of the most desirable places to visit, is nothing without its jewel in the crown, Tirana. This bustling and busy capital may suffer from a developing infrastructure – when the post-Communist transition began in 1991 and internal migration restrictions were abolished, Tirana almost immediately and chaotically attracted an additional 700,000 people from all over Albania – but that hasn’t stopped business from moving in. These include the likes of Adidas, Zara, Conad, Interspar, Rossmann and Lala, KFC and Hilton Garden Inn. The recently redeveloped Pazari Ri is testament to what can be achieved – a square that fuses old and new: with modern design brings together traditional past times of local and fresh shopping – and boasts packed restaurants and coffeeshops (see top photo).

The former Mayor, Edi Rama, now the Albanian prime minister, began addressing key issues in the early 2000s. He dealt with issues such as illegal building, public infrastructure and the aesthetics of the city.  The new mayor, Erion Veliaj, a former social activist, who with the support of Rama’s government, businesses and civil society is quickly bringing about a more substantial transformation in Tirana. Mayor Veliaj can be characterised as an extremely energetic person with a positive attitude, a hardworking ethic, and a keen fighter against climate change. He is particularly keen to combat air pollution over the next few years via the introduction of electric buses and vehicles and the promotion of alternatives such as bicycles, as well as the planting of two million trees. Tirana is now one of only three cities in Europe developing a Green City Action Plan (an initiative of the EBRD which addresses urban issues and increases resilience against climate change).

The education sector has received special attention and investment, and recently Public Private Partnership schemes have been approved to speed up the pace of construction of seventeen new urban schools. Also, in Tirana there are up to 100,000 students at undergraduate and postgraduate level. The city wants to become smart and green so that investors and entrepreneurs in these areas will visit and invest. Moreover, investments in the tourism sector are encouraged because of three primary reasons: the human capital is young (the average age is 32 years), qualified (including proficiency in foreign languages) and affordable (the minimum wage is around 157 euros and the average ware is around 266 euros); there are new tax incentives for 4-5 Star hotels and the corporate tax rate is only 15 per cent; and tourist numbers are projected to rise exponentially as
low-cost airlines are increasingly becoming available, including Transavia and Wizz Air.

If property ownership disputes have prevented foreign investors in the past, a new 60-hectare Free Economic Zone, that will be launched in the west of the city near the Durres-Tirana highway, will address the problem making it easier for business to set up shop, expand, and network.

For an introduction to Albania, its investment climate and a description of the technical and economic development the areas of Koplik, Spitalla and Vlora, can be found at the official website. For more information regarding the investment climate please visit the website of the Albanian Investment Development Agency (AIDA).

Epidamn Zeqo is the executive director of the Moikom Zeqo Institute for guiding courageous young talents in Albania and beyond.