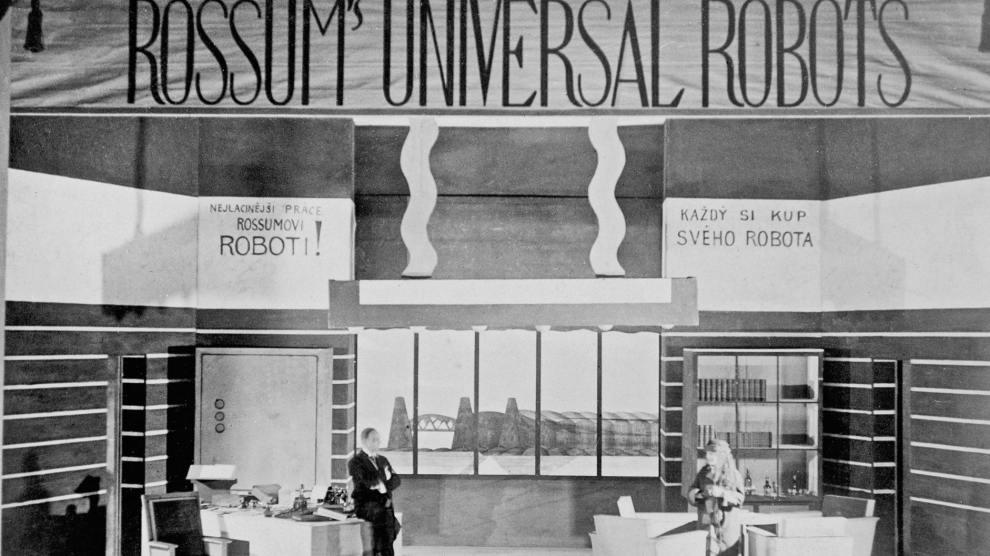 Back in 1920, the science fiction drama Rossumovi Univerzální Roboti or Rossum’s Universal Robots (R.U.R), written by Czech Karel Čapek successfully captivated audiences around the globe for its dystopian reflection on humanity, industrialisation and technology, as well as coining the word ‘robot’.

Now, a century on, a new exhibition housed in the writer’s summer residence in Stará Huť, south of Prague, is focusing on Čapek’s influential masterpiece. And while some aspects of the play itself are dated, its moral and philosophical explorations of automation and pursuit of profit remain pertinent.

Set in the year 2000, Čapek writes of a world where robots, which unlike our modern conceptions of metal and electronics instead consist of make-do humans grown from living tissue, are the spitting image of their creator, apart from the fact that they are unable to feel emotion. These robots become cheap and hugely convenient, lowering production costs and the need for anyone to work.

The protagonist of R.U.R, Helena, confuses these robots and humans in one of the opening scenes, allowing Čapek to provide an ever timely commentary on dehumanisation of the labour force, a theme which develops in tangent with his narrative. Here, as society progresses, humans are able to stop working, and there is an ever growing dependence on the artificial labour force.

Eventually, the robots revolt and lay siege to the factories, signifying the fall of humankind.

While today this may seem like the cliche ending to a dystopian sci-fi film, for Čapek in 1920, it was pioneering. The idea of a bloody revolution by a working class, melded in with fears of dependence on technology and the blind pursuit of profit was groundbreaking in 1920, and has certainly stood the test of time in terms of relevance.

By 1923, just three years after it was first published, R.U.R had already been translated into 30 languages and reached international acclaim. Its concern with the natural order of things through new forms of allegorical expressionism, taking things to the hyperbolic extreme is reminiscent of its quintessential counterparts such as Orwell’s 1984 and Huxley’s Brave New World.

Similarly, Čapek claims to neither be capitalist, communist or anything in between. Instead, he merely attacks the lack of human awareness of either condition. His dystopian macabre that was further developed in his later play, War with the Newts is now considered a poignant commentary of the tragic situation approaching on the Czechoslovak horizon, both in the north and the east.

Throughout his life, Čapek campaigned for free expression, and strongly opposed the rise of both fascism and communism that dictated the ideological narrative of Europe in the coming years. He also befriended much of the political intelligentsia which became key figures of Czechoslovakia, including Tomáš Garrigue Masaryk.

Čapek died at age 48 as a result of pneumonia, supposedly from fixing his house in cold weather. Shortly after, the Gestapo – unaware of his death – visited his home in search of the writer having labelled him as ‘public enemy number two’ in the country – perhaps a testament to Čapek’s liberal influence.

Despite seven nominations for the Nobel Prize for Literature, Čapek never received the award, yet there are now prizes awarded in his honour, including the Karel Čapek prize, which is given every other year by the Czech Pen Club for a literary work that contributes to reinforcing or maintaining democratic and humanist values.

It is clear that Čapek’s R.U.R, while not as well-known as its canonical cousins, played a crucial role in the establishment of the dystopian novel, and held a mirror to his, and our, contemporary humanity.

With this in mind, curator Zdeněk Vacek, who is the director of the Karel Čapek Memorial, hopes that the new exhibition will shed light on the huge impact R.U.R had on the international scene, focusing on the early foreign performances of the play.

“Special attention is given to the first of production in Berlin in 1923 because the stage designer, the young artist Friedrich Kiesler, went on to have such an exceptional international career. His staging was quite avant-garde. For example, he distorted the robots’ voices, and projected images onto canvases and flowing water,” Mr Vacek tells Radio Prague.

Many of those who worked on R.U.R productions ended up going on to dominating the theatrical industry, Mr Vacek continues. “In New York, also in 1923, the young acting student Spencer Tracy, who went on to become a big Hollywood star, played one of the robots [in his Broadway debut]. And in London at St Martin’s Theatre, so did Sir Michael Caine – another Oscar-winning actor.”

R.U.R was not only influential in its moral themes, but also in its language. The universal word ‘robot’ actually came from the play – though Čapek claims it was not him, but his brother, who is responsible for its invention.

According to some reports, Čapek he had originally wanted to call the pseudo-humans labori (from the Latin word for labor), but saw the word as too artificial, instead asking his brother Josef for suggestions.

The word robot, along with the play’s timeless philosophical themes even made its way to the BBC in London, marking a historical first.

“The BBC presented a radio play of R.U.R. in 1926 that aired in 85-minute segments. It was the first play which the BBC presented in its entirety. Until then, they had only broadcast excerpts from plays along with commentary,” explains Mr Vacek. In 1938, R.U.R broke another record on the BBC when it aired on television, marking it the worlds first sci-fi TV broadcast.

It is this remarkable history of a transient narrative that stretches far beyond its history, and into ours, that is explored at the Karel Čapek Memorial until February 2021, through theatre, memorabilia and even an original robot figurine owned by Čapek’s brother.

When will conservatives learn that banning abortion does little to address demographic decline?
Postcard from Bucharest, where all people want is hot water
Comment