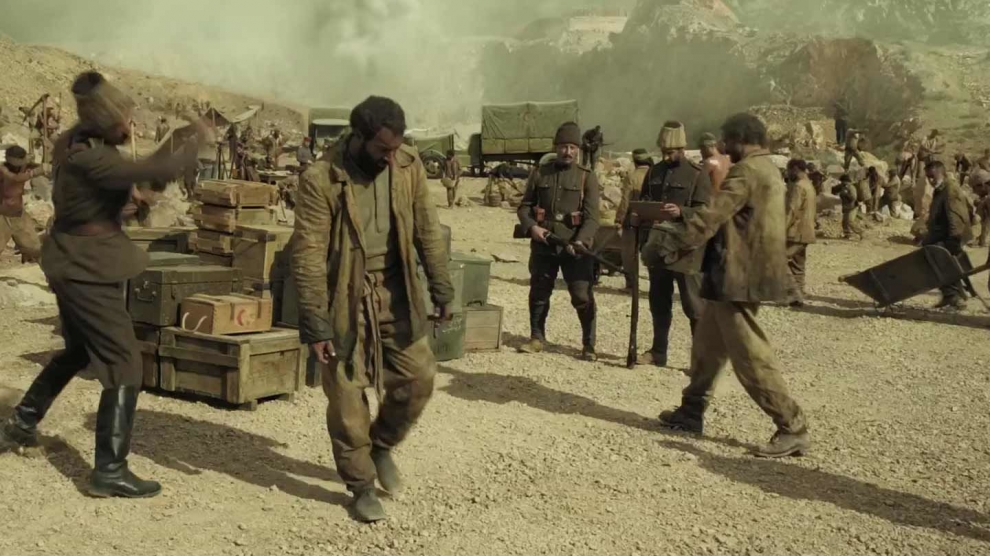 With war currently raging in the disputed region of Nagorno-Karabakh, there has probably never been a better time to watch a much-overlooked film about a much-overlooked genocide, currently available on Netflix: The Promise, a 2017 movie directed by Terry George and starring Oscar Isaac, Charlotte Le Bon and Christian Bale.

Set in the final years of the Ottoman Empire, the film begins in Armenia in 1914 and follows Michael (played by Isaac), a man who dreams of becoming a doctor. In order to pay the fees for medical school, he weds a young woman and uses her dowry to pay for his studies in Constantinople. Once he arrives in the capital of the Empire, he falls for another woman Ana (Le Bon) who is already in a relationship with an American journalist (Chris; played by Bale) reporting on the growing tensions between Turkey and Armenia. As Michael and Ana get closer, war breaks out and the three find themselves in the middle of a terrifying situation.

For the director George, The Promise was a return to the themes of conflict and genocide he first explored in 2004’s Hotel Rwanda.

This time, the Oscar-winning Belfast-born director sets his against the backdrop of what most historians view as an undeniable act of genocide by the forerunner to the modern Turkish state, which resulted in the massacre and deportation of 1.5 million mostly Christian Armenians between 1915 and 1923.

The genocide was carried out during and after World War I and implemented in two phases—the wholesale killing of the able-bodied male population through massacre and subjection of army conscripts to forced labour, followed by the deportation of women, children, the elderly, and the infirm on death marches leading to the Syrian desert. Driven forward by military escorts, the deportees were deprived of food and water and subjected to periodic robbery, rape, and massacre. Most Armenian diaspora communities around the world came into being as a direct result of the genocide.

On its initial release in 2016, The Promise divided opinion, just as the horrific event it depicts continues to do so. The genocide was the greatest atrocity of World War I, and remains that conflict’s most bitterly contested legacy, having been met by the Turkish authorities with more than 100 years of silence and denial: admitting that it was genocide is an offence in Turkey to this day.

Some criticism labelled it propaganda, not least as it was financed by the late Armenian-American businessman and philanthropist, Kirk Kerkorian. George rejects the claims, arguing that, like all of his films, it was fastidiously historically researched.

“It’s like climate change; it’s one-sided because it’s been proven. We say, here are the facts, here’s what most historians say and it’s recognised around the world except by governments where the Turkish strategic power decide to manipulate it,” said George shortly before the film was released, on the anniversary of the beginning of the genocide, in April 2017.

“While people go on and say it’s denied, it’s just a tactic to divert away from the horror of the thing and [the fact that] that no-one was ever held accountable.”

Audiences were not impressed. The film flopped at the box office, grossing just 12 million US dollars at the box office against its 90 million US dollars budget. There were accusations that the film had been nobbled: in early 2017, tens of thousands of negative reviews were posted on the movie database IMDB from people claiming to have seen the film, even though it had not yet been released. The picture appears to have been the target of a concerted campaign by Turkish cyber trolls who hoped to destroy it before it is widely released in cinemas. They appear to have succeeded.

Film critics, however, generally praised The Promise, although were left unimpressed by the love-triangle used as a plot device.

“The movie hits its cinematic stride when events are at their worst,” wrote Glen Kenny at RogerEbert.com. “The Promise is drenched in production value and replete with ravishing shots of sunrises and sunsets, but it’s in the scenes of fleeing, of battle, and of horrendous loss that the film is at its most effective. The depiction of the savagery inflicted on Armenia is bracing. George is determined to make his story as much about the dead as about the fictional survivors. It’s in that respect that The Promise earns its unsettling honour.”

“George’s solid direction ensures that the drama is mostly involving. It also helps that the Armenian genocide is a relatively unexplored period of history and makes for a horrifying backdrop. there’s something to enjoy about its traditional brand of storytelling, devoid of any irony. There are definitely more interesting and satisfying films to be made about the Armenian genocide and this is never going to become a Titanic-sized success – but it’s a solid, if overly soapy, drama,” wrote Benjamin Lee in The Guardian.

Now that it’s on Netflix, the rest of us can make up our own minds about The Promise.