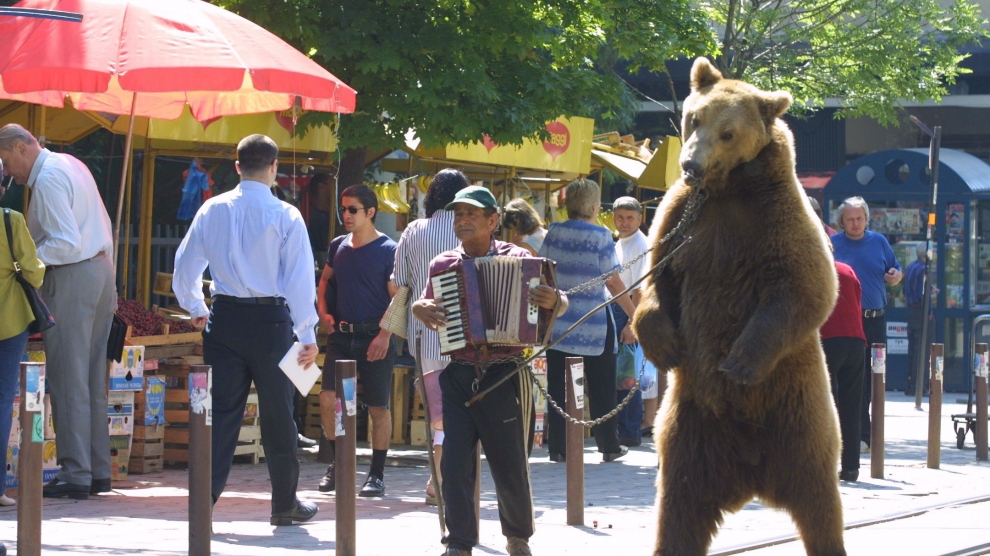 Dancing bears used to be common on the streets and villages of Eastern Europe. These tamed wild animals were kept in captivity and trotted around for the purposes of entertainment.

Luckily, it seems that through the activity of animal welfare groups such as Four Paws, this practice is on its last legs everywhere in emerging Europe. Most countries in the region have made keeping bears captive illegal, and have cracked down on unlicensed circuses and zoos.

Even though the last dancing and circus bears were freed in Bulgaria in 2007, and in Serbia in 2009, an alarming number of bears remain in captivity around the region. For instance, the last circus bear in Serbia was rescued only two years ago, in 2018.

Four Paws estimates the number of bears still held captive at more than one hundred. While they no longer dance, the conditions in which they are kept in are still horrendous. Often, the bears are placed in cages that are too small for them, and which are badly structured. In unlicensed zoos the animals are exposed to constant noise and gawking without anywhere to run and hide.

Things are getting better, and many governments have taken steps to help. But more can be done, according to Yavor Gechev, head of communications at Four Paws.

“The situation differs from country to country,” he says. “However, most governments, at least in the Balkans, are aware of the situation, mainly because of the internationally protected status of the brown bear.”

“Yet, not enough is being done to provide these and other animals in a similar situation with the best possible living conditions, especially when it comes to state control over substandard zoos,” he adds.

Protecting and rescuing these animals is the logical next step for the organisation.

“With the ban of wild animals in circuses [in Bulgaria] the next step for improving of the welfare of captive wild animals has been completed. And still there is a lot to be done for the captive bears who live in the zoos. Bulgaria has around 20 and most of them cannot reach the level of welfare that the animals deserve and of which today’s society would approve,” says Dimitar Ivanov, the manager of Dancing Bears Park Belitsa.

Belitsa is where many of the former dancing, circus, and captive bears have ended up. A sanctuary run jointly by Four Paws and the Brigitte Bardot Foundation, it is currently home to 21 bears.

“The goal of the sanctuary is to rescue bears that have been abused, badly treated, living in improper and horrifying conditions by providing them lifetime shelter with professional veterinarian care and high standards of welfare. The project started with the so called ‘dancing bears’, used in the past to entertain tourists and locals,” Mr Ivanov tells Emerging Europe.

And while it does seem the days of bears being held in captivity will soon be over, the work of Four Paws and Belitsa sanctuary is not done. A bear can live to be 30-years-old, after all.

That’s why Belitsa is committed to proving lifelong care for their wards, and keeps them in their natural habitat.

“The sanctuary offers a natural habitat – diverse forests consisting mainly of pine trees and beaches, meadows and shrubs. The sanctuary is covering an area of twelve hectares, which are divided into seven enclosures. The bears are supported with food and an enrichment programme,” Mr Ivanov explains.

Another tool that Four Paws has at its disposal is the famous Bear Ambulance. This specially equipped vehicle can be used to safely transport bears to one of Four Paw’s sanctuaries once they are rescued.

“We needed a modern professional vehicle that could transport the animals with high welfare standards, but also to be functional for small veterinarian interactions,” Mr Ivanov says.

“In the last couple of years the bear ambulance was used for transporting bears from Albania to Germany and Bulgaria, from Serbia to Switzerland, internally in Bulgaria and for vet checks in North Macedonia.”

While dancing bears are not a common sight in southeastern Europe anymore, it’s worth noting exactly how brutal and cruel the practice was.

Behind the jolly exterior, there was torture. In order to learn how to “dance” bears were trained by placing them on metal platforms above burning coals. That would cause the bear to get up on its hind legs, while a nose ring connected to a rope was used to inflict additional pain with a drum beat accompanying the entire process.

Over time, the bears would come to associate the sounds of drums with pain and begin “dancing” when they heard it.

Now these days are mostly over, but Four Paws still has its work cut out given the number of bears still held captive around the region. One of the reasons states can be reluctant to go after substandard zoos is the money needed to provide proper housing once they’re taken away. And this is precisely where the organisation can help.

“With all our bear parks in South-Eastern Europe we were able to assist state authorities in their efforts to solve an animal welfare issue related to bears by providing the best possible solution for the animals,” Mr Gechev concludes.

Dutch-Bosnian director grapples with sense of belonging in ‘Take Me Somewhere Nice’
Think Balkan cuisine is tasteless? My friend, you haven’t had a good food guide
Comment