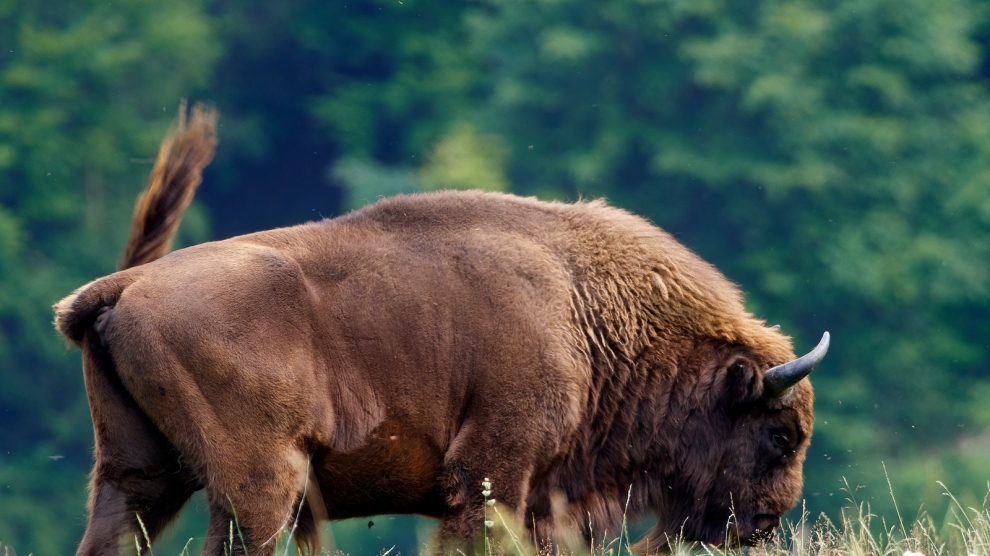 Four bison were released into the Tarcu Mountains of Romania last month, where they will join more than 50 free-roaming bison already in the Southern Carpathians. The ongoing bison rewilding programme is the largest ever attempted in the region.

The animals released in September came from two locations; three from the Donaumoos Bison Reservation in Germany and one from the Bison Breeding Centre in Hunedoara, Romania. The new additions were carefully selected, based on genetics, age, and species management considerations to give them the best possible chance of adapting and reproduction in their new environment.

Xannika, a female bison from the Karlsruhe Zoo, was also transported to the breeding centre; a 6,000 square metre special enclosure created at the Hunedoara Zoo in 2016 by WWF-Romania and Rewilding Europe as part of the Life-Bison Project.

“Xannika is essential in ensuring that new generations have a diverse gene pool. Releasing bison from the breeding centre will reduce the stress resulting from relocating animals from thousands of miles away. Romarta, the female bison born in the breeding centre two years ago and who now joined the group of three females from Domaumoos is a positive example of the success of this centre,” said Ciprian Hodor, a veterinarian

The females from the Bison Hillock in the Tarcu Mountains will remain under the close supervision of the rangers and the veterinarian for an acclimatisation period. In a few months they will join the free bison.

“They travelled more than 1,000 kilometres and arrived in good condition. Now begins the process of acclimatisation in which we will ensure that they are healthy and prepared for the life in the wild. This whole process involves complex work and very strong collaboration. The professionalism of the partners in Germany, of the Hunland Transport Company, the Hunedoara Zoo and especially the support of the local community (that has been with us since the beginning of the project) are extremely valuable,” said Marina Druga, manager of the Life-Bison Project.

Once widespread across Europe, the majestic wild European bison were driven to extinction in the early 20th century by poaching and habitat loss. The ongoing bison reintroduction programme launched by Rewilding Europe and WWF-Romania back in 2014 is the largest ever attempted in the Southern Carpathians. The first two bison releases took place in 2014 and 2015, followed by a third in June 2016 as part of the European Commission-funded Life-Bison Project, with annual releases now ongoing. In 2018, another 23 bison were released into the wild, including 14 animals at a second rewilding site in the Poiana Rusca Mountains.

The overall objective of the Life-Bison Project, which runs until December 2020, is to establish a wild bison population that is demographically and genetically viable in the Southern Carpathians. Sub-populations will be connected by ecological corridors to enable migration and genetic exchange.

Bison are the central piece of a rewilding vision in which nature becomes the key to community development and a source of well-being for local communities of this region. Continuous efforts are being invested in ecotourism, community development, education, research and technological innovation, for the benefit of nature and people alike.

Rewilding Europe and WWF-Romania collaborate closely with local communities at both bison release sites, together with the involvement of local entrepreneurs, forest managers, hunting associations and tour operators to ensure that the bison reintroduction programme is as successful as possible.