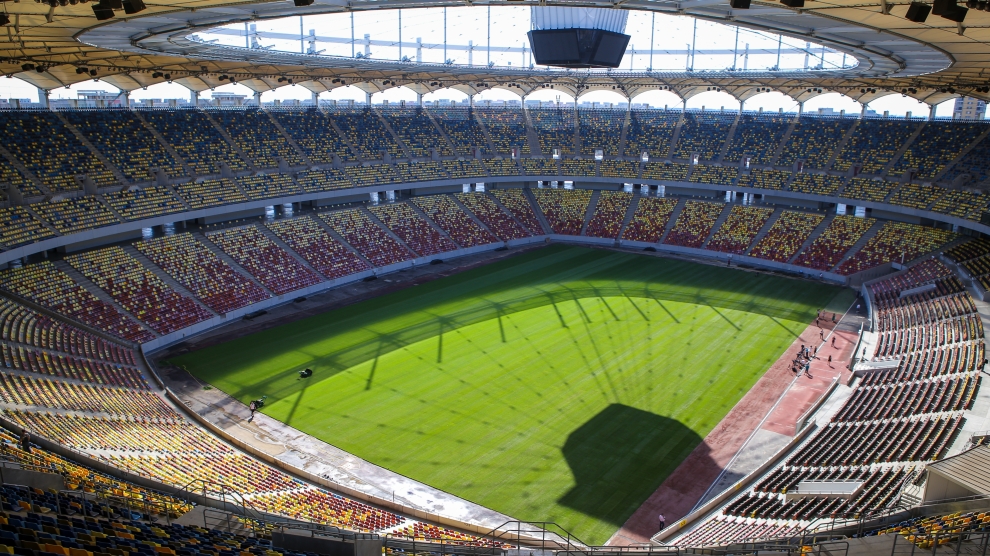 Albert Camus, one of the 20th century’s greatest philosophers but – in his youth – a distinctly average goalkeeper, once wrote: “only in a football stadium can I feel like a child again”, a reflection perhaps of his absurdist view that the human inability to find any meaning in a purposeless, chaotic and irrational universe was perfectly encapsulated by the spectacle of thousands of people screaming from the stands as men kicked a ball around on a pitch below.

The next European football championships – UEFA 2020, still known as such despite having been delayed a year by the Covid-19 pandemic – will take place in some of the most modern and legendary stadiums in the continent, all wonders of contemporary architecture and engineering. Three – the Puskás Arena in Budapest, the Arena Națională in Bucharest (pictured above) and the Olympic Stadium in Baku – are in emerging Europe, and all feature in a major new documentary series, Megastadium: A Tour of Europe, which premieres on the National Geographic channel on October 6.

What sets UEFA 2020 apart from previous tournaments – besides the fact that it will take a place a year late – is that for the first time in its 60-year history, there will be no host country. Instead, matches will take place in all corners of Europe.

The stadiums which have been selected are modern temples designed to thrill an audience even if the football on display does not meet expectations. Architects have across the board demonstrated inventiveness, genius, and boldness to build stadiums capable of hosting important matches, despite the many and varied challenges they faced.

In the first episode of the series, director Thierry Fessard takes an in-depth look at the grounds in Budapest and Bucharest, both of which occupy the site of historic stadiums dating back to the early 1950s.

The Puskás Arena in Budapest is the newest of all the stadiums featured in the series, having hosted its first match, an international between Hungary and Uruguay, in November 2019. Previously, the Népstadion had occupied the site, and witnessed some of the most memorable victories of the great Hungarian team of the 1950s, led by the legendary inside forward, Ferenc Puskás, for whom it is named. England were battered here 7-1 in 1954, Puskás scoring twice. England approached the game in the hope that a 6–3 defeat to Hungary in London the previous year had been an aberration; instead, the Marvellous Magyars provided a masterclass of football in front of more than 100,000 fans. It remains England’s heaviest defeat in international football.

Despite the historic value of the Népstadion for Hungarian football supporters, by the time of its demolition in 2016 it had become obsolete. Its capacity had been reduced to less than 30,000 due to safety concerns, and its replacement inevitable. Fortunately, the new stadium, which accommodates 67,000 people, is a direct tribute to the old. The main entrance to the old stadium has been preserved and is set to become a museum of Hungarian sporting achievement.

At the Arena Națională in Bucharest, nothing remains of the August 23 Stadium that it replaced. Like the Népstadion, August 23 opened in 1953, and like most stadiums built in Eastern Europe in the 1950s it could be a bleak place, one of what football stadium architecture expert Simon Inglis dubbed “the socialist superbowls.”

Its one redeeming feature was a kitsch neoclassical loggia from which former dictator Nicolae Ceaușescu would watch ‘mass game’ displays of coordinated gymnastics, usually on August 23 – the day that Romania switched sides in World War II – a national holiday during the communist period.

It was also the scene of some of Romanian football’s finest victories, in the days when they had a decent team. Again, England feature prominently in any history of August 23: England never won in the stadium in their three attempts, and were defeated 2-1 in 1981. Liverpool fans will have happier memories of a victory against Dinamo Bucharest on their way to winning the 1984 European Cup.

August 23 – by then something of a wreck and known as the Lia Manoliu Stadium – was demolished in 2007. It had long become more a concert venue than a place where football was played: Romania’s national team preferred to play home matches elsewhere. The Rolling Stones, Depeche Mode and George Michael all performed here.

Late and enormously over budget (like just about every stadium featured in the series) the Arena Națională hosted its first match in 2011. A year later the UEFA Europa League final between Atlético Madrid and Athletic Bilbao was played at the stadium: the most prestigious match ever held in Romania, at least until UEFA 2020 finally takes place next year.

While football fans longing for days gone by will no doubt be delighted to know that Fessard has made his documentary as much about football as architecture, speaking with former players and managers, it is the stadiums themselves – and not those who perform in them – who are the real stars.

“The technical prowess, the courage and human ingenuity necessary in order to erect a megastadium recalls the great works of the ages,” he says. “Witnesses of a time, a culture, yet also instigators of progress and innovation, these massive projects fascinate me profoundly.”

Albert Camus would no doubt agree.