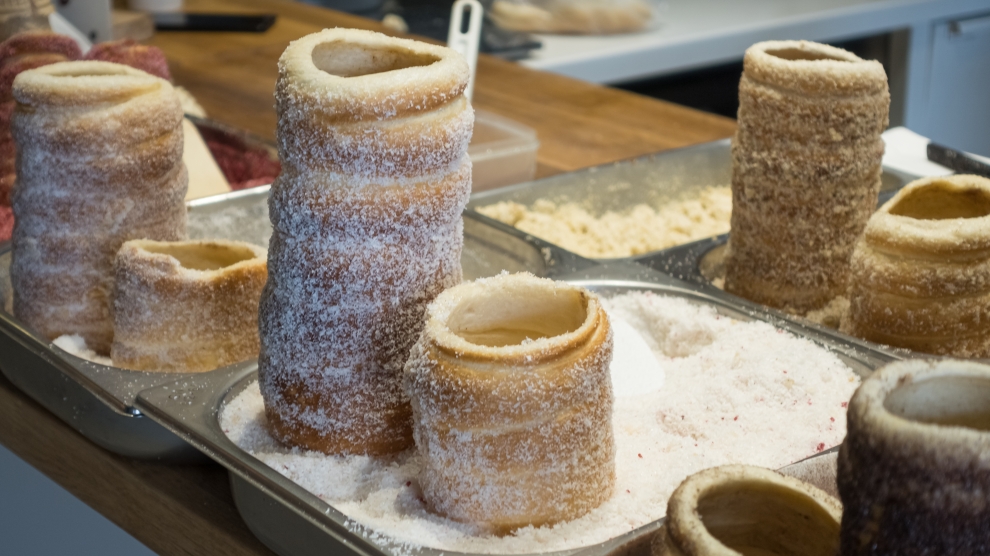 The food in emerging Europe is good, and don’t let anyone ever tell you any different. Internationally, however, Central and Eastern European cuisine has not quite caught the attention of foodies in the same way as Italian, Mexican, and Chinese food. This is nevertheless changing – albeit slowly – with more and more dishes from the region gaining international favour among gastronomes and ordinary people alike.

And while the region is perhaps best known for savoury dishes and treats, it doesn’t lack on the sweet side of life either. Desserts in the region run the gamut from heavy deep fried dough to delicate cakes. And over time influences from the Middle East and Western Europe have mixed in with native dishes to result in a dessert offering that’s varied and exciting. And tasty to boot.

Here is just a small sampling of what emerging Europe has to offer to those with a sweet tooth.

While for many desserts, and indeed all foods, it can be hard to determine exactly where they originated — koláče (also known as kolache) is decidedly Czech.

The dessert originated in the 1700s in what is today Czechia, and the name is derived from the word kola meaning wheel, in reference the to its traditionally circular shape. In fact, round breads are some of the earliest ritual foods in the region, usually symbolising the Sun and the Moon.

Unlike some other desserts from the region, kolaches do enjoy a measure of international recognition, especially in the United States, specifically southern states like Texas, to where Czech immigrants brought them in the early 1900s. Several cities hold kolache festivals annually, including Prague in Nebraska and Prague in Oklahoma.

It’s not just in America where this sweet pastry is celebrated. For Europe Day 2007, kolache was chosen to represent Czechia in the Cafe Europa initiative during the Austrian presidency of the European Union.

From Central Europe to Central Asia, boortsog is a type of fried dough that is popular around the Central Asian region, as well as parts of Mongolia and the Middle East.

Boortsog can be thought of as a cookie or biscuit, but being fried it is also similar to doughnuts. Traditionally, it is eaten as dessert, with toppings such as sugar, jam, butter, or honey. The dough used to prepare boortsog can range from the most simple to more complicated and loaded with butter and milk. That’s how its made in Kyrgyzstan, where boortsog dough calls for a lot of butter and even more milk, although sometimes kaymak (a dairy product similar to clotted cream) can be used instead.

In addition to being a dessert, boortsog is equally good as an accompaniment to tea or paired with a savoury dish like chorba (soups and stews found around Central Asia but also the Balkans).

Boortsog is a dessert highly popular in Central Asia as shown by a Guinness World Record set in Almaty, Kazakhstan, where in September 2014, 856 kilograms of the stuff were made in one day as part of a Mother’s Day celebration.

Baklava is a dessert that needs no introduction. The origin of this treat made from layers of filo dough filled with chopped nuts and drowned in sweet syrup are somewhat uncertain, but it’s thought to be either Turkey or Greece. Depending on who you ask, of course.

What’s not uncertain is the popularity of baklava in the Balkans. Regardless of the origin, baklava has been present for centuries in countries such as Bosnia and Serbia and now forms a part of their national cuisines.

In fact, it’s precisely this wide regional variation that makes baklava such an interesting and exciting dessert. While the basics are always the same, thin dough with a filling and a frosting, the details vary wildly. Sometimes the nuts are walnuts, sometimes pistachios. The dough can be held together by syrup or by honey.

In shops that focus on baklava, it’s not uncommon to see a dozen different varieties but what remains constant is the extreme and decadent sweetness, which is why baklava pairs really well with a cup of strong coffee (itself another transplant from Turkey that’s taken firm root in the Balkans).

And it’s not just the Balkans where baklava is well-liked. In Azerbaijan, pakhlava is the regional variation that adds spices such as cloves, cardamon, and saffron. Central Asia is another region that adds its own twists to the dessert.

For anyone that hasn’t tried it yet, it’s a definitely a must. It is loved by so many different nations around emerging Europe that they can’t all be wrong.

Kissel, made from sweetened berry juice, is a both a dessert and drink depending on how its made. Popular in the Baltics but also Russia, Ukraine, and Poland, the berry juice that forms the base is thickened with cornstarch, potato starch, or arrowroot. That way, a desired consistency can be produced that allows kissel to be drank, used as a sauce to be served on pancakes or ice-cream, or eaten as a jelly in the thickest forms.

The name is derived from a slavic word for “sour”, possibly the Russian кислый (kisly) and kissel itself is first mentioned in the Russian Primary Chronicle, a history of the Kyivan Rus’ between 850 and 1100. According to a story found in the chronicle, kissel saved the city of Belgorod Kievsky from a siege by the nomadic Pechenegs in 997. Once food supplies began to dwindle, a wise old man directed the city inhabitants to gather old grain and make kissel out of it. They placed the kissel in a wooden barrel and dug it into the ground, making a fake well. When Pecheneg ambassadors came into the town, they became convinced that the people of Belgorod were somehow mysteriously fed from the earth itself and decided to call off the siege.

Today, however, kissel is made from berries, and increasingly not in the traditional way but from instant mixes. In Lithuania, cranberry kissel is traditionally found at the Kūčios (Christmas Eve supper) table.

Racuchy is the traditional Polish answer to the French crepe and American pancake. Just like other types of pancakes, it’s made from flour, eggs, milk and sugar.

Where they differ is that yeast or sometimes baking soda is added. This makes the racuchy puff up and rise as they are fried in a pan of oil. In Poland, they are commonly eaten as a snack or supper.

While they are a dessert when sprinkled with powdered sugar or topped with cream, some regions in Poland prefer a savoury version served alongside fish or mushroom soup during the Christmas Eve supper.

The most common, and most popular version of racuchy in Poland is that with stuffed with apple slices and served with sugar, although in some modern recipes other fruits like berries and bananas can be used.

Racuchy can be also made in a savoury/sweet way combining fried dough with potatoes, a match clearly made in Heaven.

Kürtőskalács, which for the sake of simplicity be called chimney cake from this point on, is a dessert originating with the Székelys in Romania, an ethnic group of Hungarians living in Transylvania.

Chimney cake, so called because it resembles a chimney, is a spit cake made from sweet raised dough. A strip of the dough is spun and then wrapped around a cone-shaped baking spit, giving the cake its namesake appearance. Before it is baked the dough is rolled in granulated sugar and then as it is baked basted in liberal amounts of butter. As it is baked, the sugar caramelises and forms a shiny crispy crust.

The chimney cake is delicious right off the spit, but where things truly go into high gear is when the toppings and fillings are added. Since the inside of the cake is hollow, it is naturally filled with such items as hazelnut cream, various fruit based sauces and jellies, and it can even be used in the place of a cone and filled with soft-serve ice-cream.

This transforms the chimney cake from an already quite rich dessert (think of all the sugar and butter) into a truly decadent display topped with pretty much anything you can imagine. If it can fit inside the cone, some street vendor somewhere has used it to top the chimney cake.

Originally only found in the Hungarian populated regions of Romania, chimney cakes are now popular across the region and commonly found even outside of Hungary and Romania.

Today, it is not only a symbol of Hungary, but considered one of the most popular and well-known desserts in European cuisine.