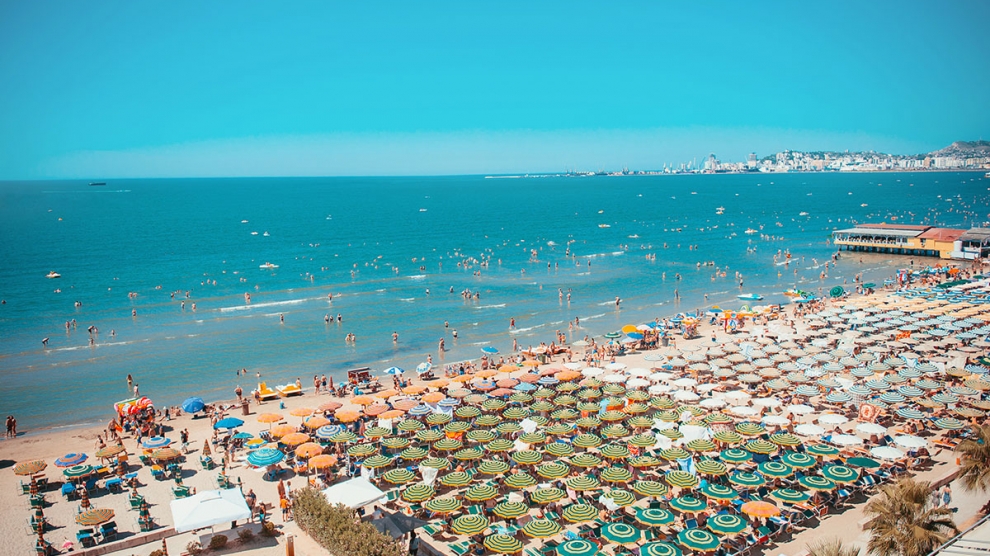 Albania’s second-largest city, Durrës has long been the Balkan gateway to the world. Greeks, Romans, and Byzantines all made use of its splendid natural harbour, and it remains one of the busiest ports on the Adriatic.

Boasting the largest Roman amphitheatre in the Balkans, Byzantine city walls, wonderful seafood and a buzzing nightlife, Durrës has a stylish seaside sass few places in the country can match. And prices remain a fraction of what you would pay elsewhere.

Durrës is a short drive from Tirana, Albania’s capital: just over half an hour, although it depends on traffic. Taxis will bring you here from Tirana airport for around 30-40 euros. From Tirana city centre there are buses and mini-buses costing next to nothing, which depart every 30 minutes from the capital’s bus station. Durrës is centred on its harbour: the old town occupies the little peninsula to the west of the port, the city’s long sandy beach is to the east.

If you want to stay in the old town, then our pick is the rather simple yet charming Hotel Nais, a genuine bed and breakfast with bags of charm and a wonderful street café. If it’s a beach hotel and a little more luxury that you are after, then the Palace is where to head.

Kick off your day at the Archaelogical Museum (Rruga Taulantia 32), possibly the best museum in the country and a real primer on Albanian history. Head next to the Roman amphitheatre. At first glance you may be forgiven for thinking that it has not been well looked after: truth is, having been built during the rule of Hadrian around 100 AD, it was damaged by earthquake (twice) and then buried by the Ottomans in the 16th century. It was excavated in 1966, and while somewhat hemmed in by modern housing, what’s left is more than enough to convey a sense of its once epic scale. A Christian chapel, added in the 13th century, is impeccably well preserved, its interior frescoes stunning.

There are more ruins – the Byzantine Forum and the Roman baths – just north of Shatervani Square, a pleasant enough space surrounded by modern buildings. Older residents of the city spend their summer afternoons here chatting in the shade below the trees. If you have the legs for it, a walk up Durrës hill will bring you to the now abandoned Royal Villa, also known as Zog’s Villa after modern Albania’s one and only king, Zog, who reigned from 1928-39. The building was used as a guest house for foreign dignitaries by Albania’s communist rulers, but was subsequently ransacked during Albania’s descent into anarchy in 1997, when a number of pyramid schemes collapsed rendering hundreds of thousands penniless overnight.

The elegant Epidam boulevard, the old town’s main street, lined by palm trees, street cafes, restaurants, shops and bars, leads all the way to the harbour, where the city gathers for its evening constitutional. The so-called Venetian Tower at the water’s edge and the wall that runs from it are the best-preserved remains of the city’s Byzantine fortifications. There are some good places to eat in the area (including a café atop the tower), but it’s worth taking a 10 minute stroll along the seafront at sunset to Aragosta (Rruga Taulantia 71), the finest seafood venue in town which comes complete with its own pier.

Wide, and blessed with the softest golden sand, Durrës beach is almost a vibrant city in itself. At weekends during the summer you will need to get here early to find a spot: if it is a deserted beach you are looking for, head much further south. Once installed however you will not need to move all day: a never-ending procession of hawkers will purvey you of coffee, tea, cocktails, snacks and anything else you might need. As the beach bars compete with each other to see who can play their music loudest it all becomes life-affirmingly noisy, chaotic and brilliantly Balkan.

If you can bear to tear yourself away from the beach for the afternoon, you will quickly discover that there is more to the Albanian coast than Durrës (indeed, many a local will whisper in your ear that the best of the Albanian Riviera is to be found further south).

Twitchers should head for the Divjakë-Karavasta National Park (or just Karavasta Lagoon) about 20 minutes south of the city, a vast area of lagoons and wetlands, woodland and marshes. Not far from here is one of Albania’s oldest monasteries, the 13th century Ardenica Monastery, whose St. Mary’s Church contains some exquisite icons painted by Athanas Zograf, an Albanian who was one of the most sought-after ecclesiastical artists of the 18th century.

The restaurant at the Hotel Oaz in Golem, at the southern end of Durrës beach, features tables so close to the sea you can smell the brine. Fresh fish, amazing seafood and a sunset you will not forget in a hurry make it one of our favourite spots in the country.

Durrës in One Paragraph

Chaotically Balkan with an unmistakable Italian edge. Superb fish and seafood at prices unrivalled anywhere else in the region. Look out for remnants of Albania’s Christian past amidst the minarets and mosques of its Muslim present. Hire a car and take a spin along the coast to the Karavasta Lagoon.