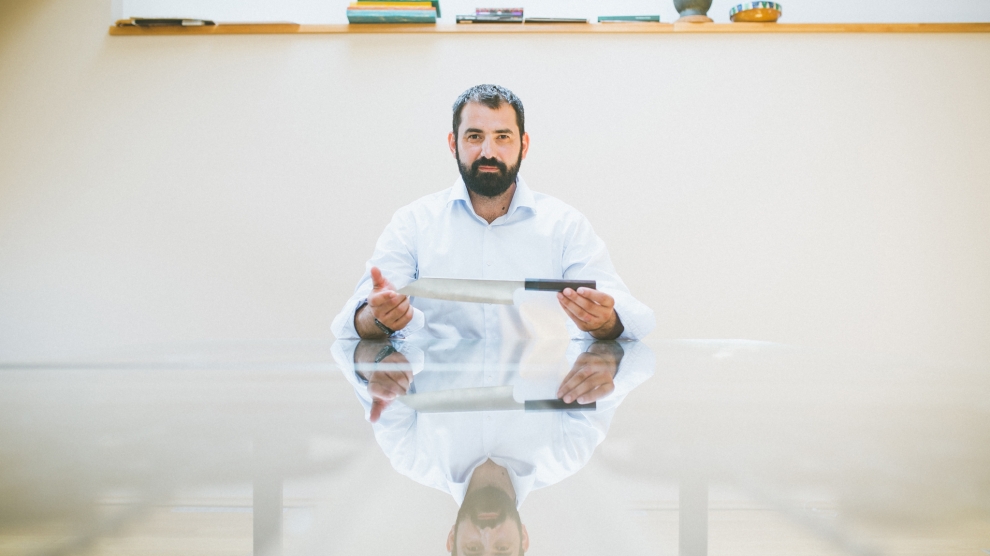 Adi Hadean is one of Romania's best-known, and best-loved, chefs. A former judge on the local edition of Masterchef he tells Craig Turp about the changing attitudes of Romanians towards food, and why keeping the country's restaurants smoke-free is a cause he remains willing to fight for.

There comes a time during any visit to Romania, particularly if you have been invited to somebody’s home, when you will be offered a glass of what is known as tărie: spirits, basically. Țuica and pălinca are perhaps the best known, two often fiery spirits not for the faint of heart. People either love them or hate them, but refusal is never an option. As one of those in the latter group – there are few spirits I drink with any real pleasure – I have learnt over the years to grin and bear it, downing the contents of my glass as quickly as possible while desperately trying to hide the fact that I find the taste repulsive.

So when Adi Hădean offers me a glass of pălinca, I fear the worst. Leaning against the countertop in the kitchen of his studio, Adi has just told me that spirits are an important part of the amazing dinners he puts together for the carefully selected few for whom he cooks. “As important as the wine,” he says.

The pălinca Adi pours me is far darker than any other I have tasted. “It’s a walnut pălinca,” he tells me. I down it in one. It’s delicious. Smooth, and without the nasty aftertaste so many glasses of tărie have left me with over the years, I would have another, but it’s only 2pm and I have work to do.

Adi Hădean sources his pălinca from a producer in Bihor, in western Romania, who refuses to divulge the recipe. What’s most striking though is not the pălinca itself, but the fact that Hădean’s love of food and drink means that he has been able to source a pălinca which even those of us who would usually run a long way to avoid the stuff will enjoy.

Hădean’s long culinary evenings – they can extend well into the night – have become a thing of legend amongst gourmands in Bucharest, Romania’s capital. Requiring days of preperation – Hădean does all the cooking himself – they are held 35-40 times per year, usually for companies looking to reward staff or impress clients. They can feature tens of courses – he admits to once cooking as many as 57 –explaining the process as he does. They are an education.

“If you have a group of 40 people or so not everyone will pay attention, but most people do,” he says. “They want to work with me, to know what ingredients I am using, and both how and why I am using them.”

Hădean is committed to improving the understanding Romanians have about food.

“Things are improving,” he says, “but at a very slow pace. It is still far too easy to fool people, and this happens a lot. The Romanian hospitality industry still sells a lot of bullshit.” The plethora of restaurants in Bucharest which look fabulous but which often serve very ordinary food at unacceptably high prices is proof of that.

“I am confident that this will change the more people travel. The more they travel the more they will understand, and know how good food should be,” he tells me.

Hădean’s professional career began in radio, in Oradea, in western Romania, after which he moved into marketing. His first job as a chef was in Cluj, in the centre of the country, at Irish Music Pub. “It was a hard period. I worked there for more than two years, with hardly any days off. Not because somebody made me, but because I wanted to learn how to cook better.”

Another restaurant in Cluj followed, Camino, where he worked for two years. It was during this period that Hădean’s career took off.

“I started to travel as my blog, and Facebook page really took off. People started to ask me to cook for them at various events. I kept Camino as a base though.”

One of the ways Hădean has spread the word about good food over the years has been via his blog, which has been running for more than a decade. Indeed, I first came to know him as a blogger who cooked a bit, as opposed to a chef who blogged.

“I was one of the first bloggers in Romania. At a time when people were only posting a couple of times per week, I was posting every day. And it came at a time when Romanians were starting to be more curious about food.”

Real stardom came when Hădean was chosen to be a judge on the Romanian edition of Masterchef. “It’s hard work,” he tells me. “I was there for two seasons, recording for almost three months straight, from early in the morning until late at night with only a few days off. But programmes like Masterchef help. They can introduce people to ingredients they might not otherwise have thought about cooking with. Whether its Masterchef or Hell’s Kitchen or any other programme, they have done a great service to the development of gastronomy in Romania, just as cooking programmes helped to educate people about food in the UK.”

Not that he would do a similar programme again. “It kept me out of the kitchen, and that’s what I love the most.”

Hădean opened a restaurant, Meatic, in Oradea, in 2017. Another Meatic, in Bucharest, will follow by the end of 2018. “The Oradea location was ready to go,” he says. “The venue had been a restaurant for six years or so beforehand. At Meatic we work a lot with slow cooking, and smoked meat, and really good fresh vegetables. About 80 per cent of the produce comes from local suppliers, and we are happy with the way things are going. We have a good young team: this is important.”

The food Hădean serves at Meatic is, he says, Transylvanian, not Romanian.

“I am from Transylvania. I grew up in the countryside, and I am proud that Transylvania is part of Romania. But when it comes to food, there are big differences between Transylvania and the rest of the country. Far fewer Balkanic influences, and more from Hungary, Austria, Germany. There are also Slavic elements, and everything I cook carries these Translyvanian roots. Of course, I cook international food from time to time as it is fun to do, and people can learn about new cultures through food. But every time I cook for an event, or for my guests, I take what I learnt as a kid growing up in Transylvania and try to translate that into a modern formula.”

As much as Hădean likes to cook with smoked meats, he has long been an advocate of smoke-free restaurants. He was the founder of a movement called fara fum (no smoke) which campaigned for a smoke-free environment at a time when doing so was unpopular. In 2016 he got his wish: smoking was banned in many public places, including bars and restaurants. There is, he tells me, still a problem, however:

“In Oradea for instance, almost every restaurant has a closed terrace where they serve food, and where smoking is allowed. This is not right. It means that we are competing not on equal terms: it is no longer about who offers the best food or the best service, but who offers you a place to smoke while you eat. It is unacceptable. They are breaking the law, and I am certain that corruption is involved. These are not hidden places, they are on the main street.”

So does the law need to be tightened?

“As it is, the law is good, it’s fine, but the law needs to be respected. We have a terrace which will be enclosed for the winter, and we will allow smoking there but we will not serve food in that part of the restaurant. It’s wrong. It will create problems for the staff, as people will insist on being served food. I tell them tough, we must refuse to serve them food.”

As a former smoker Hădean understands the urge to smoke, “but I will not serve them food while they do so. We are trying to build a family-friendly restaurant. Every weekend it is full of young children with their parents. That can’t happen when there is smoke.”

A number of Romanian MPs recently tried to relax the country’s smoking ban, but failed. They will no doubt try again. “Let them try,” says Hădean. “I am prepared to fight.”