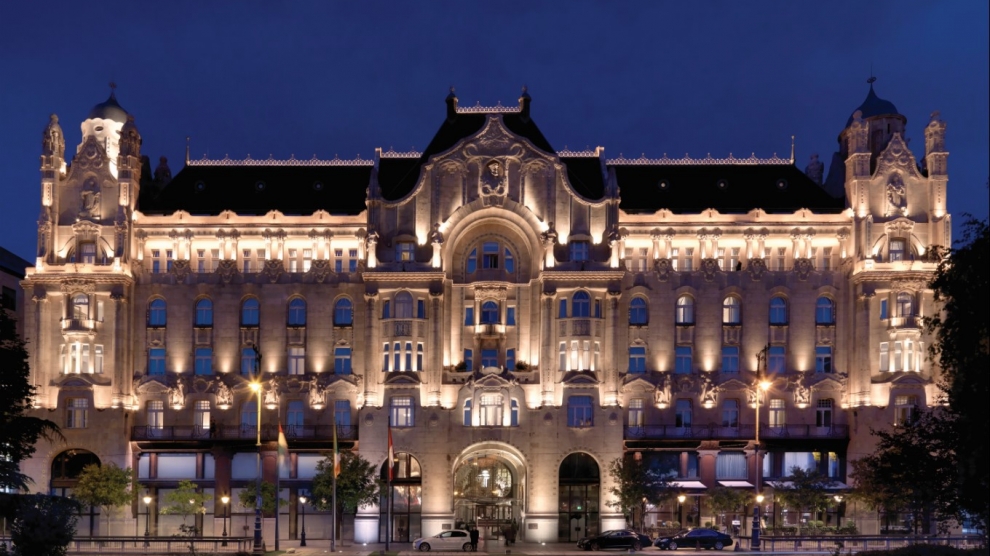 Claudia Patricolo visits the Four Seasons Gresham Palace in Budapest, a rich part of the city's history and one of the finest hotels in Europe.

I had never stepped into the Gresham Palace before today. This sumptuous hotel in the centre of Budapest has always been synonymous with luxury, an untouchable jewel, far out of reach to all but Hollywood stars. But it is always fascinating to pass by: all the beautifully waxed cars parked in front of the entrance; the elegantly dressed doorman greeting the guests; the faces of people entering the main door and staring at the ceiling, astonished and astounded.

“I love standing in the lobby, enjoying this breathtaking view: the Chain Bridge, the Danube and Buda Castle,” says Yves Giacometti, the recently promoted regional vice-president and general manager of Four Seasons Hotels and Resorts, the current occupant of the Gresham Palace. “I love to just stand here, in the middle of the lobby where I can see the expression on the faces of our guests when they walk in for the first time. They hardly notice me, instead they are all staring at the ceiling, the chandelier, the mosaics and immediately want to know everything about the history of the palace.”

I smile. This is exactly the same expression I had after walking through the door. Sitting in the bar, in what was once small gallery of shops, I feel overwhelmed by the long history of the building: the original peacock gates are still there, right in front of my eyes, the same gates which were destroyed during the bombing of the second world war. The blue glass ceiling is right above my head, looking exactly as it did in the early 1900s.

“It took five years of renovation to make the place look as it does today, as close as possible to the building’s original design,” Mr Giacometti tells me. “We worked together with the Hungarian World Heritage Commission and talented local architects in order to replicate the work of the original manufacturers and retain the spirit of the building. Today, a restored glass cupola highlights the lobby and the walking passage where once the gallery of shops stood. Times have now changed and visitors use this area to sit, enjoy or do business while drinking coffee or cocktails.”

The original palace was built in 1906 to the designs of two Hungarian architects, Zsigmond Quittner and József Vágó, who won a tender offered in London by the Gresham Life Assurance Company, owner of the building. No expense was spared. The best manufacturers were employed, the best materials were used and soon the Gresham Palace became known as an architectural masterpiece, a symbol of its owner’s opulence. Only the richest ones could afford to live in the apartments within the building and shop in the ground floor’s exclusive boutiques.

Furthermore, the Gresham Palace became the pride of Budapest for its modern technological innovations, unavailable in most buildings at the time, such as central heating and a unique centralised dust extraction system. When the Hungary’s communist government nationalised the Gresham Palace in 1948, they divided the palatial apartments into small units and state companies took over the offices.

“While only 20 families lived here at the beginning of the century, during the communist regime almost 200 people called this palace ‘home’,” says Mr Giacometti.

On June 18, 2004 the Gresham Palace reopened in all its glory. After renovation worth 110 million US dollars, the 179 rooms were ready to host people from all over the world, offering them a unique experience in Budapest between modern comfort and elegant tradition. There are 19 suites (royal, presidential and junior), and 70 rooms face the Danube.

“When I first arrived in Budapest I was astonished,” says Mr Giacometti, recounting his first night in Hungary following his move from Buenos Aires in 2010. “I was speechless in front of the beauty of the city and the architecture of the palace itself. And people working at the Gresham Palace were so cordial, attentive, smart, young, eager to do the right thing, very proud of working here.

“And this is what people still find today, when arriving in Budapest, whether they had low expectations or none at all. They arrive here and they cannot believe their eyes as they take in all the beautiful things that the city has to offer, including the opportunities to discover the history of the region. No matter how long out guests stay they always wish they had stayed longer. ‘Why did we wait so long before visiting Budapest?’, they often ask. We can count on returning guests.”

Some people come to Budapest because of family ties. Their families escaped during the war and they want to reconnect to their roots. “The concierge is often asked to find old addresses and lost relatives,” Mr Giacometti says.

Balázs Nagy has been the concierge of the hotel for almost 13 years. He saw the hotel changing, together with the guests and their habits.

“Whenever the phone is ringing, I don’t know what to expect, what will the question be from the other end of the line, and this makes the job always interesting,” he tells me. “There are always people who want to visit museums after closing time or rent an entire thermal bathhouse for their private use. At the beginning it was more difficult to accommodate all these requests, now we have a name and many contacts to use.”

Other than renting cinemas and spas, some guests order private jets to be ready within a few hours, while others want to ship unconventional purchases.

“Some people are really into antiques. One day, a man called and asked me to ship some things he bought during his visit in Budapest. I was surprised to find four cannons, almost full size and weight, and very difficult to transport.”

Strange requests have a long tradition at the palace. Back in 1906, the designers accommodated one unusual request from the Gresham company’s directors: incorporating the baroque helmets that top the turrets of the Tower of London into the towers of their design on the banks of the Danube.

Today each of the towers features a 63 sq m spacious, luxury suite with a stunning view of the city. Here marble is the key word, matched with period furniture. At the top of the range, the gloriously appointed Royal Suite is located on the hotel’s second floor, with a large balcony affording panoramic views of Buda Castle and the Matyas Church. The suite is amongst the largest in the city, providing 223 sq m of lavish space.

The Gresham Palace today is not just a hotel. The entire top floor is occupied by a health club and spa which offer a comprehensive range of rejuvenating therapies, massages and spa treatments which can’t be found anywhere else in the city. And the price is surprisingly affordable, as it is also open to the locals.

“Overall tourist activity has evolved significantly over the time. And we need to follow this pace, adapting to new technologies, introducing fast and efficient internet and USB connections in all the rooms. We just launched an app, the Four Seasons Chat, which just like Facebook messenger, allows guests to connect with us instantly with whatever they may need. It is an excellent way to connect with a new generation of travelers,” Mr Giacometti says. “Our new restaurant is perceived as a stand-alone restaurant with direct access to the streets. Since we opened Kollázs Brasserie and Bar three years ago, the place is frequented by locals and international visitors alike.”

The Four Seasons can also accommodate meetings and events of up to 180 people with its 600 sq m of meeting and conference space which combines the grandeur of the hotel’s historic setting with the latest technology.

“Guests always expect more. Generally speaking, guests are more and more well-traveled, they want to know about art and music. Budapest is perfect for such expectations. Consequently, our concierge team has to be curious and always informed about what it is available in the city,” Mr Giacometti says. The hotel is fortunate enough to have about 80 employees who have worked in the building since its reopening in 2004.

“Our guests are not just guests at the hotel, they want to be recognised, taken care of and treated as unique individuals with unique needs. They know what personalised service means and what to expect,” he adds.

When we talk about guests we cannot fail to mention all the Hollywood stars that chose the Gresham Palace as their accommodation while in Hungary shooting movies.

In fact, this is also my very first memory of the Gresham Palace. When I first moved to Hungary, I started working as a tour guide and for one month the main attraction in the city was Ryan Gosling, who was staying at the Four Seasons while shooting the fantasy movie Blade Runner 2049. Every time that I passed in front of the hotel with a group of tourists, we had to stop for at least twenty minutes, hoping to catch a glimpse of him. After a while I started including him in my tour.

“Lots of movies stars have been staying here,” says Mr Giacometti. “The action movie ‘Spy’ was almost entirely shot here in Budapest a few years ago, and we hosted the entire cast and all the producers for six months. Actually [Paul Feig] the director of the movie came here to shoot just one scene. But after having visited Budapest, he changed the entire script. Most the scenes which take place in Paris or in Rome were actually shot here.”

And I can understand why. At the end of every trip, Budapest is still a city I like to come back to. It always offers something different, a new restaurant to try, a new event to attend. And now I will include the Gresham Palace in the list, a jewel that is not as untouchable as I once thought.