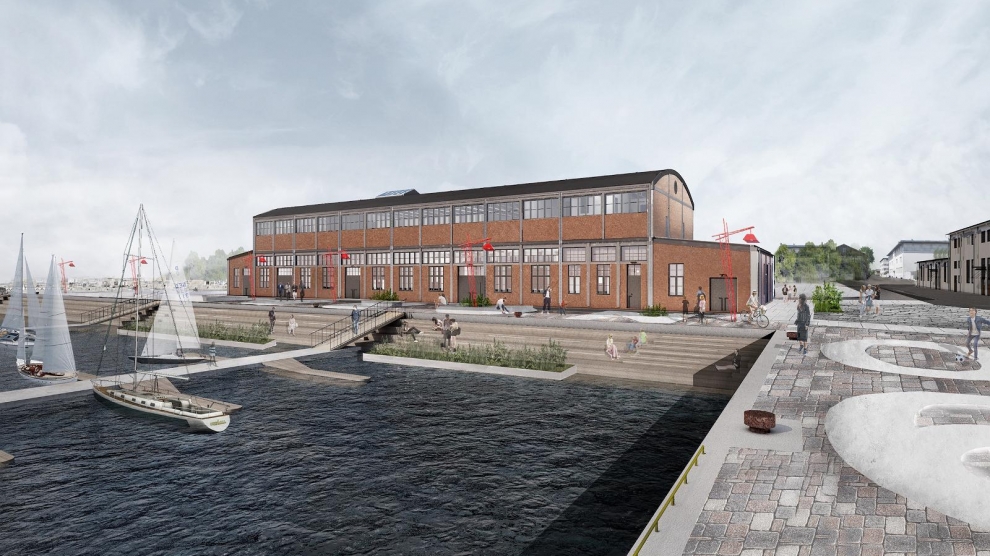 Kai Art Centre is a new cultural hub for local and international art set to open in September 2019 in the historic and culturally-vibrant Noblessner area on the waterfront of Estonia’s capital Tallinn. Spearheaded by the Estonian Contemporary Art Development Centre, a non-profit foundation focused both on fostering international exposure for artists from Estonia and on developing the contemporary art scene in the country, the more than 100-year-old protected building – a former submarine plant – will provide 450 square metres of top-floor exhibition space, presenting four main exhibitions each year.

Located at Port Noblessner, Kai has both the Seaplane Harbour and the historic Kalamaja district as its neighbours. The history of the port dates back to 1912, when two businessmen from St Petersburg – Europe’s biggest oil industrialist Emanuel Nobel (Alfred Nobel’s nephew), and Arthur Lessner, the owner of G. A. Lessner machinery plant – built a submarine production plant on the site to serve the navy of the Russian Tsar. The area was closed to the public for nearly a century due to its military functions. The two-storey, reinforced concrete building being renovated was originally constructed in 1916, and its most unique element is the curved concrete roof which gives the center’s exhibition space its six-metre high ceiling.

Kai’s inaugural exhibition, Let the field of your attention…. soften and spread out, is an international group show curated by Hanna Laura Kaljo, which will open on September 21 and run until December 1. It is part of the main programme of the city’s contemporary art biennial, Tallinn Photomonth.

The title references an exercise in the 2004 book by Miranda Tufnell and Chris Crickmay A Widening Field: Journeys in Body and Imagination. Similar to the book, the exhibition considers the creative arts through an emphasis on receptivity to our bodies and our surroundings. An invitation to gather through different registers of visibility, from small-scale private moments to those more public. The undercurrent of its curatorial choreography is one of attentiveness to the ways in which the seasonal transition towards darkness and dormancy inherent to late autumn and early winter in Estonia may affect our bodies, inner lives, and how we come together.

“The curatorial process of imagining the first exhibition at Kai and this historically layered, formerly closed-off coastal part of Tallinn has been guided by methods of listening and intuitive perceiving,” says Hanna Laura Kaljo. “I have remained vulnerable towards a story that cannot be accessed directly. It has been challenging and rewarding to see how we might evoke an atmosphere of openness to depth and dormancy, suggested by the metaphor of the submarine and the season, in which the show and the Photomonth biennial is taking place. I’ve been met with immense support from both Kai and the biennial team, and feel grateful for the opportunity to curate an exhibition for my birth town, bridging, perhaps, an innate Estonian sensibility with an international perspective. I feel excited to share the practices of artists who have not been shown in Estonia before, whilst also collaborating with young, local practitioners. I see Kai and its co-working ethos as an invaluable addition to the local creative ecology, creating the conditions for international exchange and hopefully also fostering a vision of the role of contemporary art from this particular locality.”

At the core of the centre’s programming is the Kai Residency. Launching in October 2019, it aims to support innovative practices, develop global networks, and engage the local art community in Tallinn. Inviting international visual artists, curators, writers, and other contemporary art professionals, it provides the opportunity for selected participants to live and work in Tallinn while being immersed in the city’s dynamic art scene. It will host up to 14 participants in its first year, with five places for residents from Nordic and Baltic countries.

In addition to its extensive exhibition and residency programmes, auditorium, and education centre, Kai will host and produce a comprehensive film and event programme curated together with Estonian and international cultural organiaations. Foto Tallinn, an art fair dedicated to promoting and introducing contemporary photographic art, will take place at Kai from September 27-29.