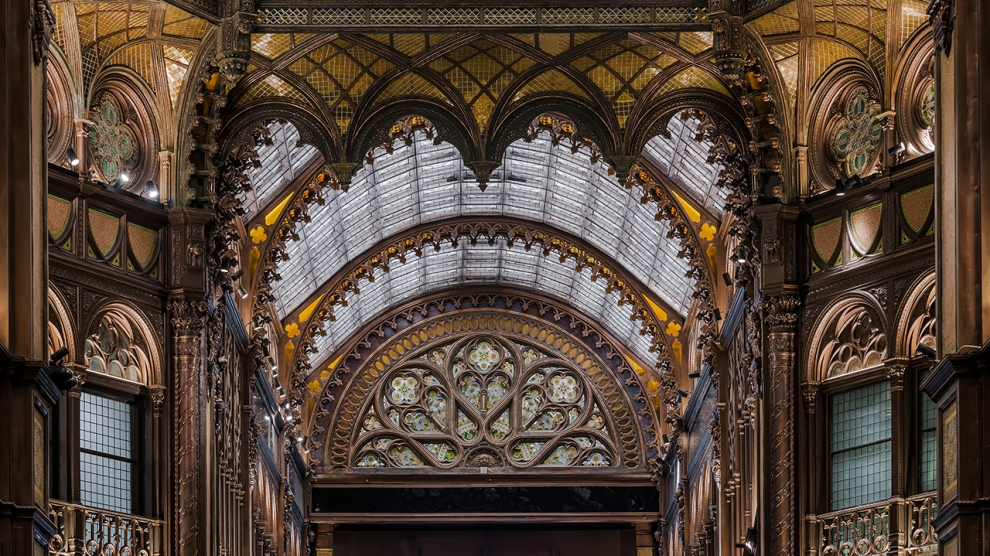 My first apartment in Budapest was located on Ferenciek ter, in the heart of the city centre. Everyday on my way to work I would pass by the Párisi Udvar, a magnificent building, though sadly abandoned at the time. Over the past few years however, the building has been transformed, restored to its former glory, and has just opened as one of the most luxurious hotels in the city.

During those renovations, I had always been curious about what was behind the scaffolding. When I entered last week to take a look, I was overwhelmed by the beauty of the architecture, the green Zsolnay tiles and the elegant patterns.

Of course, I was not the only one admiring the wonderful ceiling and the marble staircases. What surprised me though was that most of the tables in the hotel’s cafe were occupied by Hungarians. An elderly couple were sipping tea and talking quietly, as if remembering times gone by.

“On a number of occasions, I have heard a ‘wow’ from tourists as they enter the building,” explains Farah Willey, director of sales at the Párisi Udvar hotel.

“Then there are the Hungarians, who have a very special emotional attachment to the building. Many of them have personal stories related to the place. I remember a lady walking in with tears in her eyes. She was brought up in the countryside and the Párisi Udvar was a place she would come as a special treat while visiting Budapest with her parents. Many residents of Budapest have told me that Párisi Udvar was known as a place to meet for a first date.”

The building was designed for Baron József Brudern by Mihály Pollack, also the architect of the Hungarian National Museum. By the time it was completed in 1817, people had already started to call it Párisi Udvar (Paris Court) or Párisi House. Baron Brudern himself lived on the second floor, and there were 32 shops were located on the ground floor. The shops were the most elegant and luxurious in the city. It was believed that the attraction-seeking, breath-taking building was designed by Pollack as a replica of the Parisian Passage des Panoramas, from where it took its name. In 1906 it became the home of Budapest’s Central Savings Bank, and was redesigned entirely. 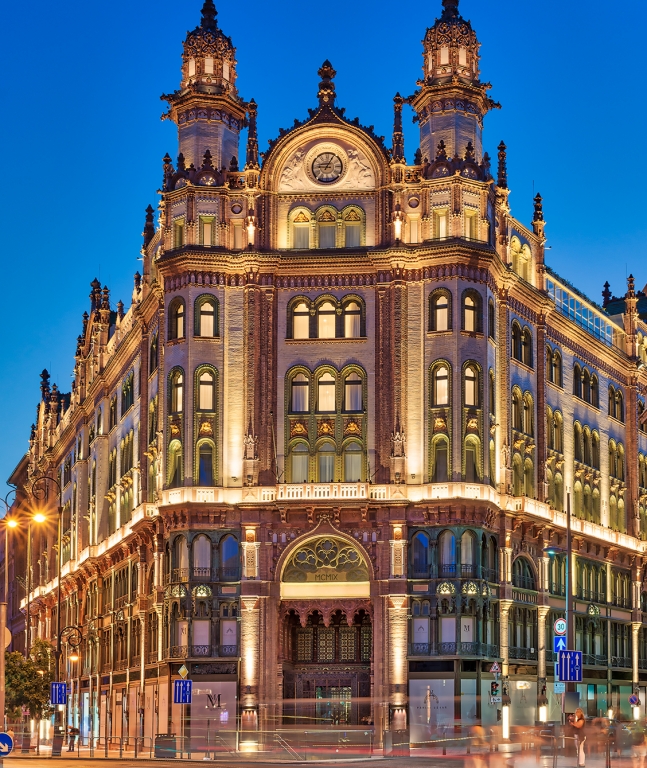 Although many buildings in the area were damaged during the World War II, the Párisi Udvar was untouched.

“Everything about the building preserves its original beauty,” Mrs Willey tells Emerging Europe. “Some of the elements of the passage were produced by the same company which built Harrods in London. Their originality has been preserved.”

Tinker, Tailor, Soldier, Spy, starring Gary Oldman, Colin Firth and Tom Hardy, and filmed in 2011, offers a glimpse of the building before renovation began, while also offering a look at the beauty hidden under the dust. The very first scene takes place in the hotel’s shopping gallery. When a man is shot dead, the falls to the floor: it is the exact same floor that has been in Párisi Udvar building for decades and which today has been beautifully restored.

The hotel incorporates elements from Arabic, Moorish and Gothic design, representing Hungary’s fascinating past. The original façade, staircases and decorative tiles have been carefully preserved and the guestrooms feature tailor-made, Hungarian-crafted furnishings. Entering from the street or the lobby, visitors to the hotel’s restaurants and cafes will see its original iconography, including the Central Savings Bank mascot, the honey bee.

“We are proud to open this extraordinary property to travellers looking for a one-of-a-kind experience,” commented Tamás Fazekas, general manager of the hotel. “The hotel represents Hungary’s impressive architecture and craftsmanship; a place which residents and travellers have treasured for decades. We are looking forward to welcoming guests to the hotel and letting them discover the stories of the location and, possibly, find their own new ones.”

Today the building is part of the Unbound Collection by Hyatt and features 110 guestrooms elegantly designed with decorations by Hungarian contemporary artist Ágnes Tóth. There are also 18 luxurious suites and two Royal Residencies including the spacious Budapest Residence situated at the top of the hotel, which provides guests with stunning views of the city and a terrace to relax and watch the sunset.

“The building is so beautiful, every corner has his own story,” continues Mrs Willey, recalling her favourite place in the building. “There is a balcony above our famous luxfer glass chandelier which took two years to put together. I love standing there and watching people who enter to the Parisi Patisserie with the emotional ‘wow’. Or I love our stunning Club Lounge with its full-height atrium, original green Zsolnay tiles and stained glass windows where you can sit and compose your thoughts ahead of a daily busy schedule.”

As customers’ needs are changing, so hotels are adapting to new kinds of travellers looking out for a different experience. The hotel offers two unique dining options, each with its own style and space. The hotel’s main restaurant, the Párisi Passage Cafe and Brasserie serves international cuisine but also local and international wines in a cosmopolitan dining area. It is made complete with an open kitchen, allowing guests to interact with the chefs in a relaxing yet lively atmosphere. The Patisserie and Café, best known for its signature dark chocolate dessert, Párisi Kocka, will serve hand-crafted juices, artisan coffee and traditional Hungarian pastries. By evening it transforms into a stylish cocktail bar. Furthermore, the highly trained therapists at the hotel’s Zafir Spa will use locally inspired treatments to leave guests feeling fully rejuvenated. For guests looking to stay active during their stay, a modern, fully-equipped fitness centre will be open 24 hours a day.

“Budapest as a destination has finally taken its well-deserved place among the most visited European capitals. I recall having meetings with high officials in 2011 and they were all curious why Budapest, which is such a beautiful city, was not promoted as much as Prague or Vienna. Since then a lot of changes have taken place,” says Mrs Willey.

“Today Budapest is a well-known destination for a lot of people and was even voted as the best leisure destination to visit in Europe. The number of visitors is growing and it obviously supports many sectors, like hotels, restaurants, museums, thermal baths, shops. Stereotypes are still a challenge. Many times we are bidding against other European capitals to host events or incentive groups from overseas, fearing the fact that not everybody knows what a gem in Europe’s crown Budapest is,” she concludes.

The Danube Swabians: A story of cultural loss and revival
All-female exhibition confronts erosion of women’s rights in Poland
Comment