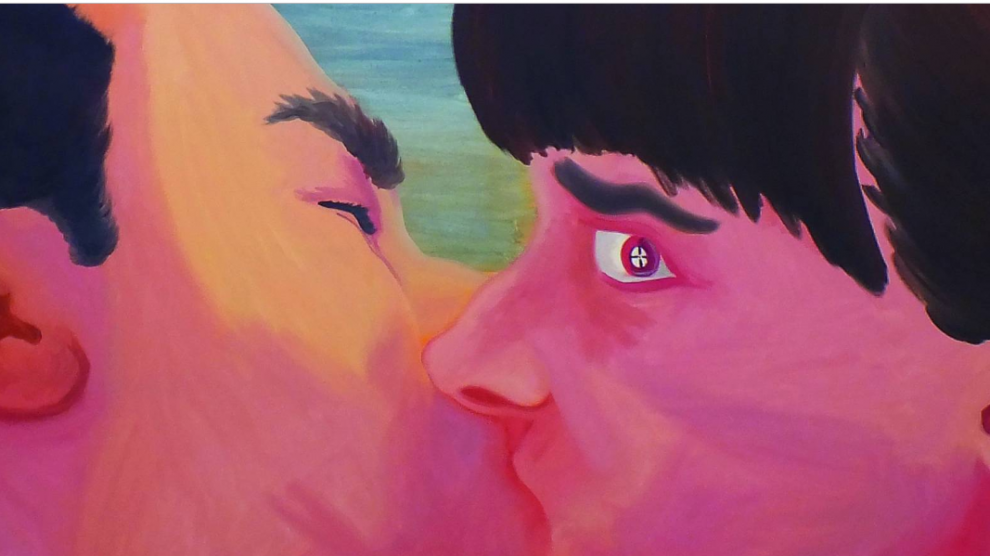 It’s not an altogether pleasant experience these days to put the words ‘Poland’ and ‘women’s rights’ into Google. A whole raft of articles appear suggesting that the country has become increasingly hostile towards women, and increasingly patriarchal. And not without reason.

However, dig under the surface a little and it’s not too difficult to find a growing artistic subculture that would suggest women are fighting back.

One example is a new thought-provoking exhibition at Warsaw’s Museum of Modern Art,  Paint, also known as blood, entirely made up of the work of female artists. It is a first for a major international exhibition to showcase paintings by artists predominantly from the emerging Europe region who are challenging hetero-normative stereotypes.

While focusing on an assertive vision of womanhood through self-determination, the exhibition does not follow the traditional routes of social commentary. Paint, also known as blood takes an alternative approach, raising visceral themes that border on the macabre, empowering the female form by stretching its image beyond societal confines. This freedom of expression challenges the viewer in its grotesque and sexually autonomous form, away from the patriarchal objectification so often depicted in the art world. The body of work often takes a surrealist, neo-expressionist and abstract style, inviting the audience to interpret the paintings in relation to their own experience of femininity.

This evocative exhibition is particularly important for the feminist movement when placed in the context of Poland’s regression in women’s rights. In 2016, the ruling Law and Justice Party (PiS) put forward a law to ban all abortions except in cases of rape or if the mother’s life was at risk, sparking what became known as the Black Friday protests.

While that particular law was eventually withdrawn, Poland still has some of the strictest abortion legislation in the EU, manifesting an opposite trajectory of countries like the Republic of Ireland which recently voted in a referendum to loosen its restrictive abortion laws. According to Human Rights Watch, the situation in Poland is deteriorating and many blame the party’s close relationship with the church for its reinforcement of traditional gender roles and discouragement of gender equality. It is in this context that Paint, also known as blood carries even greater importance.

This exhibition provides hope for feminists in its expressive illustration of femininity outside of societal ideals, distorting female iconography into something confronting and thought provoking. This is exemplified in the work of Montenegro-born, New York-based artist Darja Bajagić. Her artistic process entails abstracting images of pornography away from their original context, challenging the viewer to an opposing interpretation of the form’s original ‘purpose’, resisting puritanical assumptions. This process reverses objectification, taking away power from those who enforced it. Similarly, Polish artist Gosia Bartosik offers a non-traditional exploration of womanhood. Her paintings detail the roles that are forced upon her in various stages of her life (mother, child, lover, wife) and abstracts them to the vaguely feminine, rather than discernibly female. This leads the audience to question what it is to be female, and their roles in modern society.

Promisingly, Paint, also known as blood has attracted a lot of attention and projects a confronting and rebellious image of femininity onto an increasingly less liberal society, spurring on much needed debate.