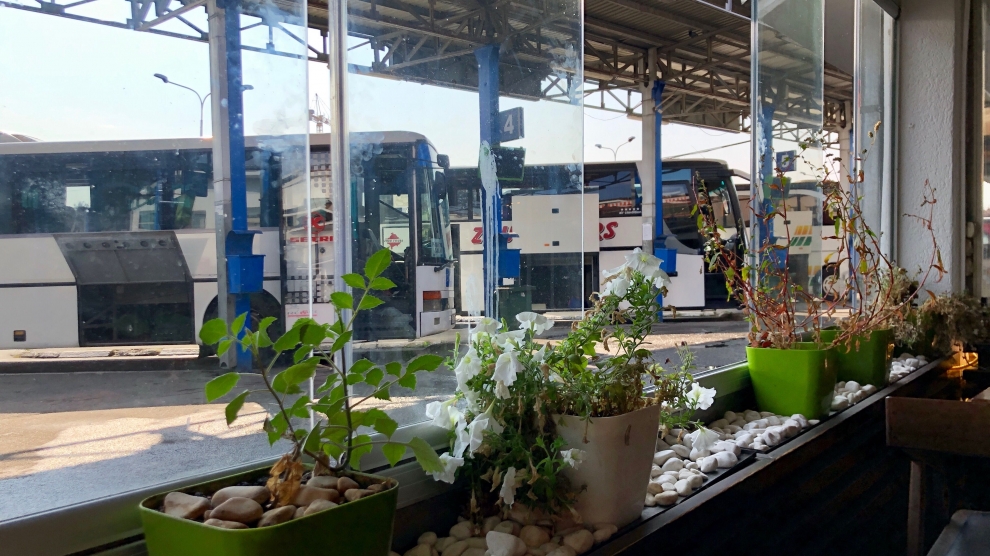 Can you sit there, in the next row? I am here with my family.

With those words, a Reese Witherspoon wannabe lookalike asks me to make room for her as she takes off her Chanel shades and boards a minibus travelling from Prishtina to Skopje. She is followed by three younger versions of the Hollywood actress, a fancy mother and slightly neglected father.

Sure, I say, thinking that it would anyway make more sense to take an aisle seat and have a bit more space.

My new neighbour, seen off earlier by two KFOR soldiers who carried his large plastic case is now busy talking enthusiastically and emotionally on the phone. It’s not all that hard to guess his nationality. Tranquillo, tranquillo! Va bene. Ciao! He finishes his call as I sit down next to him.

Despite having an Italiano vero sitting next to me and being on board an Amalfi Tours minibus, it would be a stretch to imagine that I am somewhere near Naples, although the Kosovar driver of the minibus is doing his best impersonation of Italian driving.

It would perhaps be easier for him if he had a better vehicle, but the ancient Mercedes clearly had many tens of thousands of miles on the clock before being imported to Kosovo from Poland. I know it came from Poland because the zapnij pasy (fasten your seatbelt) window sticker remains. Passengers ignore it.

Before getting on the bus, I had presented the ticket I bought at the station. I got two receipts: one said five euros, the other 5.50 euros (the amount I paid). Later, the driver said. The ticket inspection procedure was in fact delayed until we had left Prishtina and passed the Venus hotel. A gentleman who I thought was just another passenger pulled a small ticket machine out of his bag and started checking or selling tickets.

Meanwhile, the Kosovar lady who asked me to change my seat was wondering what to do with a list on which she had written her and her mother’s names and passport numbers.

She eventually passed to my other neighbour across the aisle who, despite looking like a typical WASP and speaking with the heavy accent of the American south, had not only written her details very manifestly – her name was there for all to see, Elizabeth – but also made it clear where she came from by adding ‘USA’ next to her passport number. She also flashed her dark blue travel document a few times so no one could doubt her nationality. She seemed eager to let the entire bus know she was American.

It is easy to see why.

Kosovars have a special thing for thing for Americans. I was told a few times that it is thanks to the US the country of nearly two million mainly ethnic Albanians exists. I even spotted a tweet saying Kosovo is the 51st US state. The country seems to be the most pro-America nation in the world. In a recent Gallup poll, Kosovo gave the current US administration a 75 per cent approval rating.

Bill Clinton, whose large poster I saw when leaving the city, is almost considered as a  founding father in Kosovo and is beloved there for championing the 1999 NATO intervention, which forced Serbian troops to end their Kosovo campaign. He visited the country last June and Kosovo’s president, Hashim Thaçi, honoured him with a medal, saying it was a “token of appreciation” for the “liberty he brought to us”.

I understand why Elizabeth felt so proud being American in Kosovo. Unfortunately for her, Prishtina is less than 70 kilometres away from the border with North Macedonia and driving Italian-style on a brand new highway meant that we reached it in no time.

The moment we crossed the border she lost her hero status. Now she was just another passenger like the rest of us.

All quiet at the beach. But for how much longer?
The Ukrainian start-up producing ‘coffee glasses’
Comment