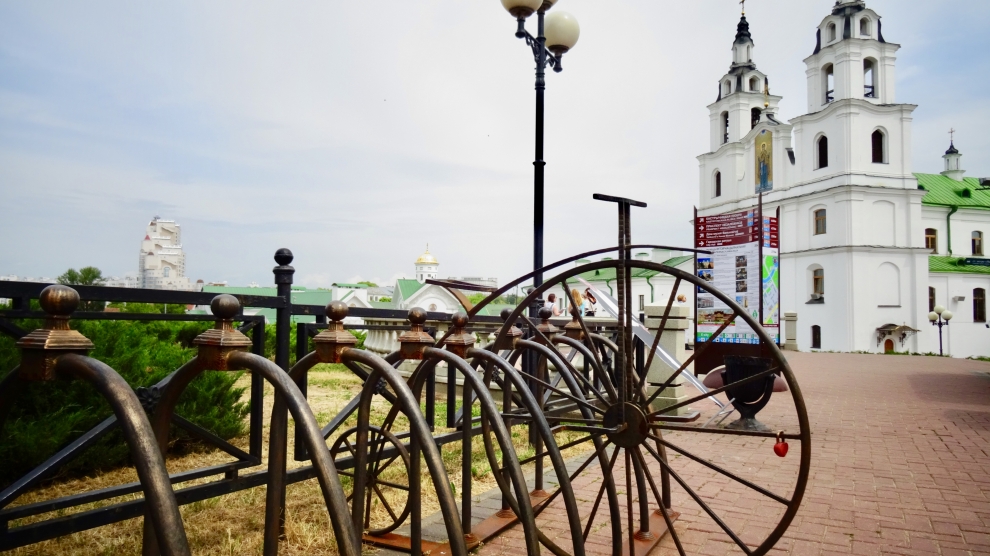 “You’re coming to Minsk to work in a hostel over the summer?” the lady opposite me on the train asks, incredulity stretching the skin around her eyes.

“Yes,” I answer. I can tell she doesn’t believe me. After all, how many English girls have the dream of travelling to Belarus to spend the summer working in a hostel?

I don’t want to talk to anyone right now. I’ve been up since 4am. I just want to sleep.

“Do you at least know who you’ll be working for? How do you know him? Have you met?” She sounds concerned.

“He’s a guy I met online, we’ve talked over Skype”. Now I say it out loud it sounds like the start of a horror story: small blonde girl moves to the other side of the continent to work for free for an unknown man she met online. Is this really the situation I’ve put myself in? And yet here I am, on a train from Vilnius to Minsk on a quest to improve my Russian by throwing myself head first into a whirlpool of immersion, fuelled by raw enthusiasm (and certainly not by sleep or food). ‘Minsk will either be excellent or a disaster, and either way it will be an adventure’ is what I’d been telling myself for weeks.

I realise the lady opposite is talking to me again.

“What’s that?” I ask, my tongue has forgotten how to contort itself into Russian and my words are slurred from sleep deprivation.

She repeats herself slowly, “I said, I have a daughter your age in Minsk, take her contact details, I’m sure she’d like to meet you.”

I hadn’t expected so much kindness from a stranger. I thank her and take her daughter’s number. Maybe Minsk won’t be so bad.

Vlad meets me at the station. He’s the guy I’ve been in touch with; it’s his hostel that I’ll be volunteering at. He takes my suitcase from me – it’s heavy but he insists – his sense of Slavic-machismo leaping to assist a diminutive damsel in distress. Tired, hungry, and a little overwhelmed by everything, I’m looking forward sleeping in tomorrow, exploring the city and finding a supermarket.

I stare at him. Is he joking? I’ve only just arrived, and in eight hours I need to leave again? Where do I possibly need to go at 6:30am on my first day in Belarus?

To answer my questions: no he is not joking; yes I need to leave again; and we’re going to his hometown of Novopolotsk, five hours outside Minsk, to be registered at his home address as my private visa requires me to do so.

My room at the hostel is tiny. Not just small, but miniscule. Smaller than a cell at Guantanamo Bay. Indeed, when I later looked up the dimension of the Guantanamo cells, they seemed a luxury that I would relocate to in a heartbeat. After opening the door the half way permitted and stepping inside the room, you find yourself immediately faced with the end of a bunk bed. Walking along the side of the bunk bed is not possible due to the width of the room, or lack thereof, so I crawl onto the lower bunk. I sit cross-legged on the bed and stretch out my arms; I can touch both walls and my elbows are still bent. When I squeeze my suitcase inside the room all available floor space is completely taken up by the bed and the case.

Vlad calls from outside, “When you’ve unpacked we can make some draniki  (Belarusian potato pancakes) together.”

Draniki are a simple, yet delicious, part of Belarusian cuisine. For best results they should be fried until golden and eaten hot with a generous dollop of sour cream. My first draniki were burnt and cold, but beggars can’t be choosers and I was ready to eat anything that was put before me.

The following day was long to say the least. My mood seemed to constantly oscillate between ‘This is fun! You’re in Novopolotsk, a city you’d never have any reason to otherwise see’ and ‘This is terrible! I just want to leave!”. Vlad was late to meet me in the morning, having apparently found it difficult to get up so early. Unsurprisingly I had little sympathy for him, even less when we had to run the length of the platform to catch the train. Once on board I had the pleasure of meeting Toilet Guy. A charming individual who saw me exiting the train toilet and decided to inform me of my apparent beauty (when I’m sleep deprived and hungry, really?) and when I refused to give him my number asked, affronted, if I was into girls rather than guys (well if you’re the best Belarus has to offer then yes, definitely!). Novopolotsk was like no city I’d ever seen in Europe, for all I knew I could have been swept into the air, Dorothy-style aboard a tornado and deposited on the wide, Soviet streets of Novosibirsk.  I was registered without too much of a fuss, other than being bluntly asked if I’d come here to get married, ‘To Vlad? Please!’, and we had the rest of the day to relax. June 9 is incidentally Novopolotsk’s birthday. The idea that a town can have a birthday was something of a foreign concept for me, and the wearisome day culminated in a truly spectacular firework display. The thrill of the fireworks was somehow tainted however by having to run once more to catch the train back to Minsk.

Cold and lonely I arrived back at the hostel at 7am. I crept into my room so as not to disturb Nastia, my roommate, and collapsed onto my bed. Two hours later however, it was time to begin work and learn how to run a hostel.

“Good morning,” Nastia greeted me when she saw that I was awake; “Today’s going to be complicated”.

And complicated it certainly was. I had not had time to sleep, settle into the city, or even buy food. Yet when Nastia left just a few hours later, I found myself running the hostel alone. Morning til midnight is a long shift, and it feels even longer when you have nothing to eat. Working alone in the hostel meant I was unable even to pop to the tiny corner-shop to grab a loaf of bread. I was on house arrest and, apparently, hunger strike.

During that first week in Minsk I was swept up in a flood of feelings I’d never before experienced, both psychological and physical. Even walking short distances around the city on my days off felt exhausting at times. I hate slow walkers and yet try as I might, I could summon neither energy nor motivation to force my legs to walk at a decent pace. Instead I dragged my feet from bench to bench, trying to keep myself together and focus on the positive aspects of living in Minsk. I cried more in the first week of working at the hostel than I had for a good eight months before hand and each time I felt utterly hopeless. Half of me wanted to book the next flight home, half of me was berating myself for not being strong enough to stick it out until the end.

Yet it’s amazing what the human body and brain can get used to, especially when placed in a situation where your peers (i.e. Vlad and Nastia) appear to find nothing out of the ordinary. A week went by and I no longer cried silently each night, nor did I wake up each morning with my heart racing, feeling unable to inhale to my lungs’ full capacity. Minsk is a beautiful city and the friends I’d made here made it seem worth staying, if not out of job satisfaction then for the pleasure of spending time with them when not at the hostel. The weeks went by and I soon realised I’d been in Minsk for almost a month. The size of my room started to seem normal, checking guests in and out had become automatic, and I was able to speak Russian over the phone without panicking (much). Yet the hostel was never a home and living without a home carries its own mental fatigue.

What’s more, as much as I hate to be the typical western foreigner who steps into Eastern Europe and complains about the lack of health and safety…the hostel was indeed suffering from a chronic lack of health and safety regulations. Located on the top floor of an old building without a lift or a fire escape, there was no obvious plan of action for what to do should a fire break out. There was not a fire extinguisher to be found there, and plugs leaked out of extension leads plugged into yet more extension leads. Given that my job was to manage the hostel in its entirety during my shift, naturally I was, by default, the fire warden too – a task with terrifying implications that, luckily, I was never called upon to perform.

After five weeks it was time for some serious self-reflection. I hate quitting things and the hostel was no exception. My pride was also at stake in the matter. The way I saw it, I’d planned to stay until the end of August and leaving any earlier was a sign of weakness. But our strengths and weaknesses can switch sides as easily as a coin, and all it took was to flip my sense of pride from heads to tails. Heads: I’m weak if I can’t make it until the end. Tails: I’m weak if I continue to accept working 56 hours a week for no pay, no food, and accommodation that surely even Belarus has some kind of regulation against. I mentally flipped the coin and it landed tails up. That small imaginary coin was the motivation I needed to gather my courage, not to stay, but to leave the hostel once and for all.