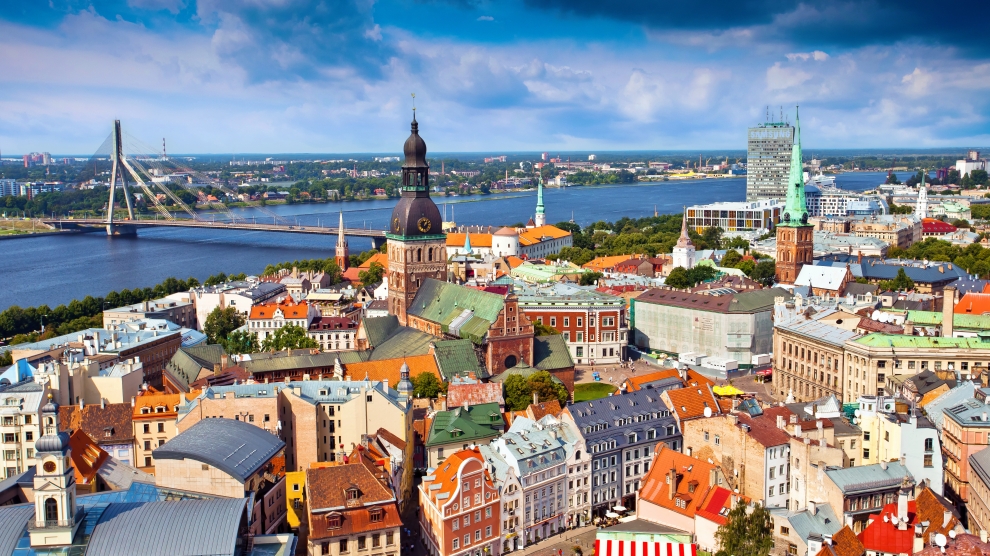 Latvia’s Minister of Finance Dana Reizniece-Ozala, who, following a general election in October, is about to complete her term in office, speaks to Andrew Wrobel about the country’s sustainable growth as well as recent money laundering scandals.

The year did not begin well for Latvia’s financial system. In February, the country’s anti-corruption authority was forced to detain Ilmārs Rimšēvičs, the governor of the country’s national bank on suspicion of demanding bribes of at least 100,000 euros. (New charges were brought against Mr Rimšēvičs in November). The arrest triggered international concern and caused a ripple effect which ended up with ABLV, Latvia’s third largest bank, seeking emergency liquidation from the European Central Bank, after it was accused by the US authorities of facilitating large-scale money laundering and failing to come up with a survival plan. So far, ABLV’s liquidators have managed to repay 69 per cent of creditors.

Dana Reizniece-Ozala, Latvia’s finance minister, is keen to point out that long before the ABLV scandal, the country had been aware that it had a problem and was working hard to put things right.

“We have demonstrated a stronger dedication to protecting our financial sector from potential illicit flows of money,” she tells Emerging Europe. “The active work of the government, law enforcement and regulation institutions began in late 2015 when we saw that the amounts of non-residential deposits had sky-rocketed, while the capacity to control them lagged behind. So we took action, armed with a much stronger legal framework, and increased penalties. Certainly, the events of February and March forced us to implement the changes much faster. But the results can already be seen. Non-residential deposits at the end of last year exceeded 40 per cent. This has now been reduced to 20 per cent, of which half are from EU residents, and approximately a quarter from CIS and other non-residents.”

Latvia, she says, is doing its homework – strengthening cooperation among various institutions, so that they are able to detect financial crimes, to investigate and prosecute them.

“We are allocating additional resources to the regulatory law enforcement institutions. As well as strengthening the legal framework, of vital importance is that action is taken at an EU level, because the nature of the illicit flows of money are cross-border.”

One of the suggestions that has been made in international finance circles is that Latvia has not done enough to improve cooperation between different legal bodies. Mrs Reizniece-Ozala believes that this is a European-wide problem, and needs to be dealt with not just at a local, but also at a European level.

“This is not only a problem in Latvia,” she says. “Many other countries recognise that there is a lack of strong systemic cooperation. Yes, one of the initiatives that we have established is a cooperation platform between the private and public sectors, so that we can exchange information for the benefit of and betterment of financial crime investigation. I fully support the idea that this kind of modern legal framework should be established at a European level. I also think that we have to work on the centralisation of the FIU (Financial Intelligence Unit), the central institution responsible for AML (Anti-Money Laundering): we need to streamline regulations at the European level. Just one example: even if a country (an EU member state) fully implemented the AML directives, it would still not be fully compliant with FATF (Financial Action Task Force) recommendations. The Moneyval process is carried out according to FATF regulations. Basically, there are different sanction regimes in Europe and in the rest of the world. This is a problem in a case like ABLV; it becomes a dialogue between a single member state and the US as to the rules and regulations of the game, not the EU. The AML directives have to be turned into regulations so that we ensure an equal and obligatory transposition of the them, which is not the case today.”

Latvia held a general election in October in which the Harmony party, which takes almost all of its support from Latvia’s numerous Russian-speaking minority, took the largest share – 19.9 per cent -of the vote. Prime Minister Maris Kucinskis’s governing coalition comprising the Union of Greens and Farmers, the National Alliance and the Unity party only won about 27 per cent of the vote between the three of them, the same as two populist parties, KPV LV and the New Conservatives, who also won 27 per cent between them. Both the KPV and New Conservatives are seen as potential coalition partners for Harmony. Support for the ruling coalition was hit by widespread public dissatisfaction with its fight against corruption and money-laundering – both key campaign issues. Mrs Reizniece-Ozala defended the government’s record, and added that she does not believe that the process of cleaning up the banking sector will be derailed by a change of government.

“Recent Latvian history has proven that even if governments change, the main political priorities normally remain the same,” she says. “The obligations taken by previous governments are carried forward by those which follow, and this will also be the case within the context of the financial sector.”

Even if the government is led by more populist elements?

“Yes, because the populists cannot form a government on their own. Besides, there is an action plan to be carried out within the context of Moneyval’s recommendations. And regular reporting to the cabinet of ministers and the PM has to be ensured so that all the institutional framework is there: it’s not only the government that has to take action. Actually, the onus is on the law enforcement and regulation institutions, who haven’t had any elections.”

In 2007, just before the global financial crisis, Latvia’s economy grew by over 10 per cent. In 2009, GDP plummeted by 18 per cent. In 2018, the economy is expected to go up by 3.3 per cent. With some economists anticipating an upcoming financial crunch, Mrs Reizniece-Ozala is confident that Latvia’s growth is sustainable enough to withstand any shocks.

“Our growth is sustainable,” she says. “There are several differences to the situation we faced a decade ago. One very important one is that the strong link between the government and the banking sector has been cut, and the banking sector has been made much more self-sustainable, not only with national requirements but also with EU Banking Union development, requiring higher capital adequacy and liquidity ratios to ensure that the banks are self-sustainable. The control mechanisms have been improved. The second of course is that we are monitoring inflation rates very carefully. Back then inflation was exceeding 10 per cent, at one point reaching 16-17 per cent. This is not the case today. It is at a healthy 2-2.5 per cent. So we are much more sustainable. It is not only internal consumption driving growth, but also the increase in exports, in production and investment. Then, of course, there is the availability of EU structural funds, which have helped in the convergence process of all three Baltic states.”

Mrs Reizniece-Ozala adds that there have also been a series of serious structural reforms carried out which have increased the competitiveness of the country, such as launching the new health financing system, implementing tax reform to boost company competitiveness and introducing a progressive labour tax. “We have decreased inequality in Latvia,” she claims, “while keeping a strong fiscal base.”

The finance minister points to the number of tax reforms made on her watch as perhaps her most important legacy.

“There are two major goals of the tax reform. One is to decrease inequality — that is why we introduced progressive personal income tax and non-taxable minimum rates. The other is to increase the tax collection rate, because until now we have had one of the lowest rates in the EU. In the short term it will stay low, but over time, because of the tax reform, we expect it to grow and come close to a third of GDP.

“In order to increase the competitiveness of companies we have totally changed the corporate income tax system. We increased the tax rate from 15 to 20 per cent but companies do not have to pay tax as long as they reinvest profits and do not pay dividends. That will improve the productivity of SMEs and improve their own capital structure and make them more attractive to investors. Another positive side effect that we expect to see is SMEs becoming more bankable. Until now, the financial sector – banks in particular – have argued that few SMEs were bankable enough.”