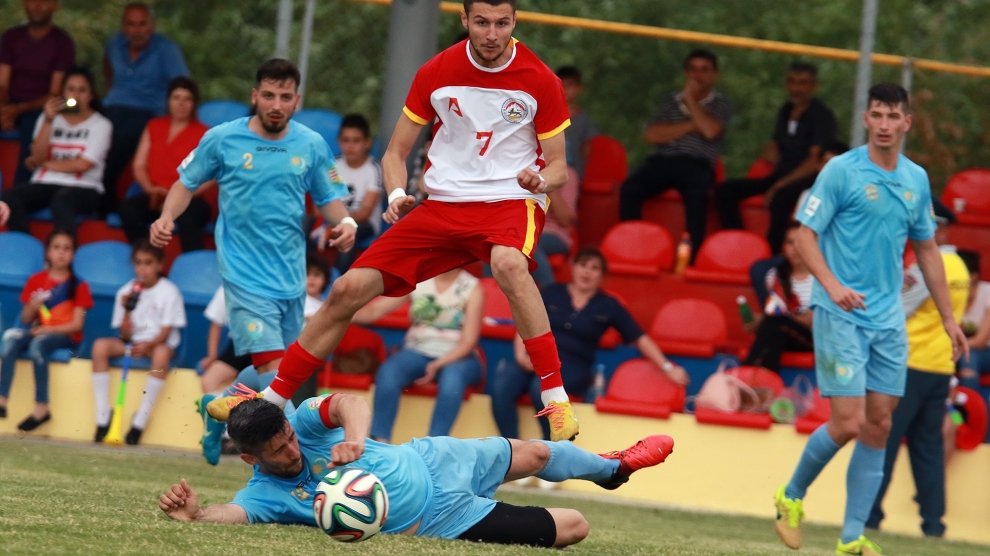 While English football teams Arsenal and Chelsea both complained vehemently last month at being forced to play their Europa League final in the Azerbaijani capital Baku, eight other teams have been only too happy to spend this week in a remote corner of Azerbaijan playing in the CONIFA Sportsbet.io European Football Cup, currently being held in the disputed Republic of Artsakh (also known as Nagorno-Karabakh). The tournament ends this weekend with the final taking place in the Artsakhi capital Stepanakert on Sunday. The match, between South Ossetia and Western Armenia, can be streamed for free online, here.

Founded in 2013, CONIFA represents countries, territories, autonomous regions, provinces and stateless peoples unable to gain membership of football’s global governing body FIFA. One example is Greenland. Although it has the same status as the Faroe Islands within Denmark, Greenland is not, unlike the Faroe Islands national football team, a member of FIFA nor of any continental confederation and is therefore not eligible to enter the World Cup or other sanctioned tournaments.

“CONIFA (the Confederation of Independent Football Associations) is a global umbrella organisation for national teams not under the auspices of FIFA – representing nations, minorities, isolated dependencies or cultural regions,” says Sascha Düerkop, CONIFA’s general secretary. “Our main goal is to give football outsiders overlooked by FIFA or left behind by their mother country FA the chance to win their place on a global stage.”

CONIFA currently has over 50 members, of which some – including Tuvalu and Kiribati – are independent countries that have yet to be granted membership of FIFA. The majority, however, are stateless peoples (such as the Roma and the Kurds), disputed territories (such as Artsakh) and self-declared independent states (such as Somaliland and Northern Cyprus).

However, with members also including breakaway regions of Ukraine and Russian-occupied territories of Georgia, CONIFA has faced accusations of playing more politics than football. Düerkop rejects such claims.

“We have many values and aims off the football pitch,” he says. “One of the main reasons CONIFA exists is that we want to bridge the world and bring people together. This should be done in a way which leaves all politics behind. We do not judge if our members deserve political independence. We want to put them all on the world map by showing their members and people to the world and give them the chance to represent themselves. Politically we are 100 per cent neutral and the only thing we do is raise awareness of our members. This leads to people thinking or educating themselves about the countries/minorities/regions they come from. Each player, in that sense, is an ambassador of his nation or people.”

CONIFA’s flagship tournament is the World Football Cup, last held in 2018 in England and won by Karpatalja (a predominantly Hungarian-speaking region of Ukraine), who beat Northern Cyprus on penalties in the final.