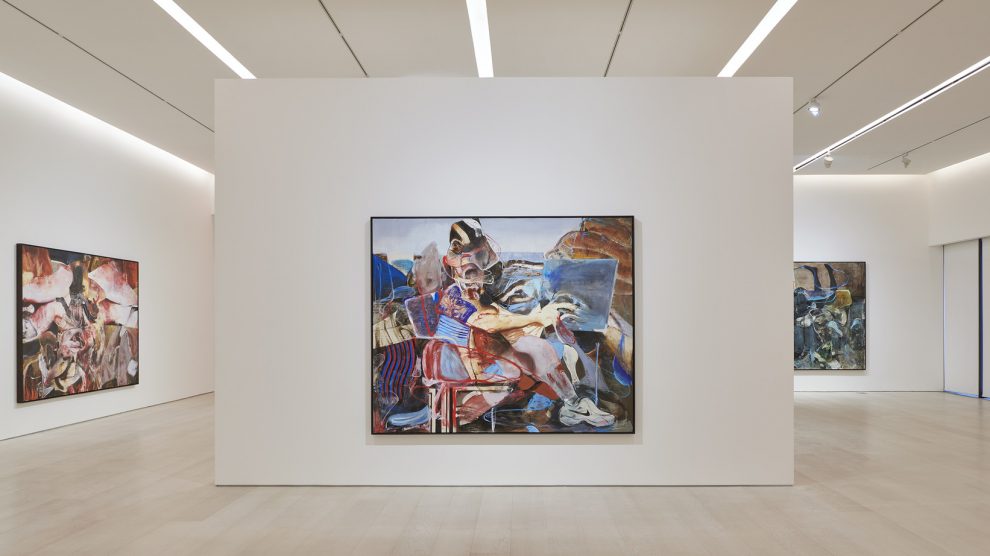 The Hooligans, Romanian artist Adrian Ghenie’s fourth solo exhibition with Pace Gallery in New York City, brings together nine paintings and three drawings, all made during the last year.

The first time I encountered Adrian Ghenie’s work was nearly four years ago, and yet it seems much longer than that. I suspect that the reason for this is, at least in part, is because the world appears so very different than it did in early 2017, when Recent Paintings, Ghenie’s third solo show at Pace Gallery, opened to the public. The Trump administration had only just begun, and no one could foresee how radically altered the country and indeed the world would be in just a few years. The work of this Romanian-born painter was gripping, pregnant with mystery, profoundly sensuous and stimulating – I was immediately enthralled.

The canvases of the forty-three-year old Ghenie were large, bold, saturated with colour, pinks, and reds and blues; imbued with a sense of history, yet unlike anything I had seen before. His portraits were engaged in a sustained dialogue with Van Gogh and Francis Bacon, among others – but there was something new here, unafraid, uncanny. Ghenie was peeling back the surface, exposing an inside composed of more than flesh and blood, an inside that was more than just another outside. This was a painter’s painter, fashioning images which could be at once deeply unsettling and intensely beautiful.

Rest During the Flight into Egypt (2016), provides a case in point.

This was a theme which painters had been returning to for centuries. With an immense canvas (nearly ten by eight feet), that manages to feel both epic and intimate, Ghenie brings his subject into the present day with the inclusion of anachronistic details (such as sneakers with the Nike logo); invoking the present-day refugee crisis with which Europe was contending. An ominous figure, shrouded in a pink mist, is seen in profile, its face blood red, the left eye swollen and shut. Some kind of black hood covers his head – are we to suppose this is the angel of death, stalking the young boy and girl who sit in the foreground? Or is this but another weary traveler seeking a moment’s rest in his flight from persecution and violence?

Ambiguity is an indelible feature of Ghenie’s work; and in this instance it may mark the ambivalence that many Europeans (and Americans) register when confronted with the prospect of sheltering refugees fleeing from the war-torn Middle East.

The Hooligans is Ghenie’s fourth solo exhibition at Pace Gallery, comprised of nine paintings and three drawings, all produced during this last year. It is a sustained engagement with European painting, including J.M.W. Turner, the Impressionists, and post-Impressionists, particularly Van Gogh and Gaugin. Ghenie remarks in a statement about this new body of work: “When I look at the Impressionists, I have the strange feeling that I am looking at something very schizophrenic. Behind those harmless colourful landscapes there is an incredible, destructive force; camouflaged. It is an act of hooliganism.”

At first glance, Ghenie’s painting The Impressionists (2020) would appear to have little to do with that artistic movement, its fascination with ever-changing light, its serene landscapes, its emotionally soothing pastels, and the almost phenomenological fidelity to the artist’s experience.

But then, that is precisely the point. Ghenie is asking us to rethink the meaning of the Impressionists – and for good reason. He is keenly aware that all genuine art is ultimately subversive – and the artist is, by extension, a kind of troublemaker, a “hooligan” as he puts it.

Ghenie’s canvas is mostly dark, certainly not bathed in the kind of sunlight so characteristic of Monet and Sisley. It is not clear whether we are indoors or outdoors, but the presence of a security camera, and the general dearth of light seems to place us indoors, while adding a discomfiting element of surveillance. A security camera generally remains stationary, recording everything that takes place within its frame – and oddly enough this does bear some comparison to what Monet would do, painting the very same view, again and again, at different points of time in the day, recording how light transforms and almost dissolves the objects with which it comes in contact.

The Haystacks (1890-91), consisting of some twenty-five canvasses, were one of the first great series of impressionist paintings by Monet – and they are invoked by Ghenie in The Haystack (2020), one of the show’s four large canvases.

What was for Monet a sustained exploration of the transience of light – a way of capturing the real effects of the sunlight as it constantly moved and transformed the visible – becomes with Ghenie a frightening and surreal landscape, with an empty road stretching nowhere. The haystack, such as it is, has become something altogether transformed – a dark and ominous mass, which appears to be almost smoldering deep within. The violence becomes palpable when we note the bloody leg that seems to have almost sprouted from it. Camille Pissarro said of Monet’s haystacks, “These canvases breathe contentment.” Ghenie is teaching us not only how to look at his own work, but how to look at works from the past, where all too often we see merely “the surface, the skill, the prettiness.” He is saying look more closely and you will find “the energy behind this, the violence” – in a word, the hooliganism.

“Turner! Oh my God! To paint a train… when everybody was obsessed with the greatness of nature and the heroism of the past.” Ghenie’s Mr Turner (2020) is another highly charged painting in the series. The black top hat alone invokes the great English Romantic, J.M.W. Turner, whose paintings even today can startle us with the daring and energy of his brush. Ghenie’s unsettling canvas shares with Turner a certain sense of frenzy – but Ghenie’s painting seems to be more about dismemberment than anything else: a lower leg and chalky foot, a hand, an odd phallic-like proboscis which reappears in a number of paintings from this series. The generous use of reds and pinks add to the unnerving whiff of violence that this canvas exudes.

The Hooligans marks a decisive step in the development of this daring, provocative and utterly unique painter. The Berlin-based Ghenie chose the title of this exhibition with care, attentive to the nuances of this word: the youthful rowdiness, irreverence, and public display of very physical disruption.

The painter, the artist, is, for Ghenie, a kind of troublemaker; and, in this sense, an inherently subversive force in society, breaching the very same standards which his work serves to establish. Which is also to say that even where it is not explicitly political – perhaps especially when it is not overtly political – genuine painting has an irreducibly transgressive dimension.

These canvases are less tidy, more unnerving, and frenetic than the paintings I saw in 2017. But then a lot has happened in the last four years. Ghenie’s paintings do not attempt to explain the world – if anything, they make things more difficult, allowing for a world that is messier and more complex.

But as Turner once remarked of Rembrandt that he could give the most mundane object a sense of mystery; Ghenie recognises that a painter subverts our ordinary ways of looking, and in the process gives back to the world its vitality and its strangeness.

Adrian Ghenie: The Hooligans will be on view through February 27, 2021 at Pace Gallery, located at 540 West 25th Street, in New York City.