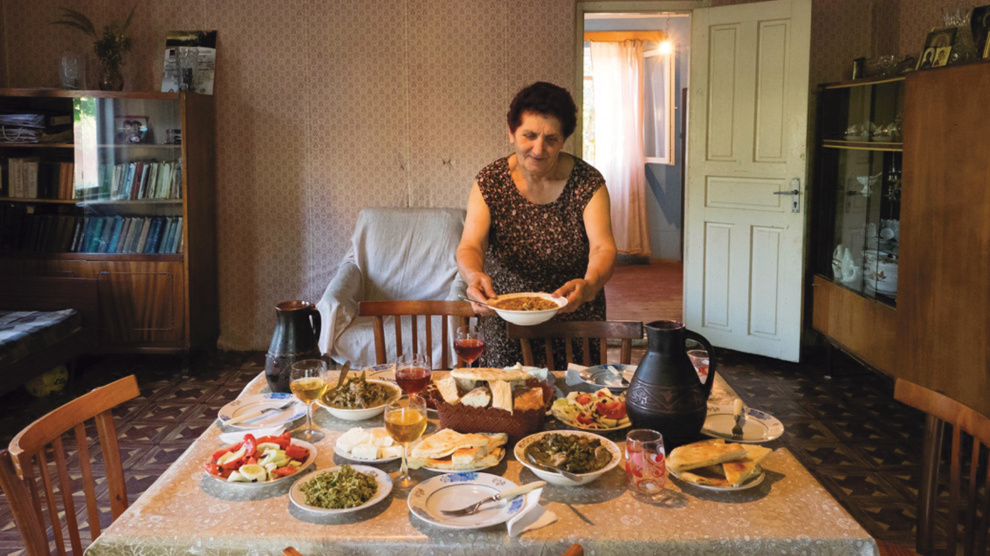 A giant clay pot helped me fall in love with Georgia. I was immediately seduced by the majesty of the egg-shaped terracotta qvevri with their swollen bellies and pointed bottoms designed for natural winemaking. When you enter a traditional wine cellar in Georgia you walk into a seemingly empty room. Unlike most of the rest of the world, Georgians place their crushed grapes into qvevri that are buried in the ground, so in a Georgian cellar the wine is being made and stored below your feet, safe in the earth’s or ‘mother’s embrace’. It’s been done this way for at least 8000 years, and qvevri are now recognised by UNESCO as an intrinsic part of Georgia’s intangible cultural heritage.

“Making qvevri is an unbroken tradition that’s been passed from generation to generation through the millennia, just as I’m now passing it to my children,” says Zaliko Bodzhadze, one of only a handful of potters whose families still have the inherited know-how to keep the qvevri-making going. The orange wines made in qvevri from white, macerated grapes are unlike others I’ve tasted.

They combine the structure and tannins of a well-made red wine with the flavours of exotic teas and dried apricots that are more associated with aromatic whites.

By the end of my first week in Georgia I had decided to write what turned out to be a large book about the culture of the country’s foods and wines. I travelled often to Georgia over the next three years, visiting small houses in tiny villages where the women cook local specialities in their uniquely generous way, often from kitchens without running water.

In Meskheti, southern Georgia, for instance, a few miles from the monumental 12th century cave city of Vardzia, a woman produced one of the finest and most complex meals of my life cooking over a wood-burning stove in her bedroom. She made an array of dishes from just a handful of dried stinging nettles, cracked wheat, fermented blossoms, sun-dried plums, courtyard chicken, home-made cheese, flour and clarified butter.

The food at such a supra – or feast – is varied and abundant, with at least eight to 10 different dishes being served during the course of the meal. The flavours range from earthy to spicy, from sharp to sweet, so it takes an unusual wine to accompany them all. That’s where the macerated whites come in: they complement this articulated range of tastes much better than the reds or whites we’re used to.

In the course of my research, I listened to – and then retold – stories of courage and resistance, with all the detail of a battle freshly fought. One of my favourites has to do with wine. In past centuries it’s said that the men would leave their villages to go to war with a few clippings of their favourite grapevines tucked safely under their chain mail.

I assumed this was in case they were killed in battle, so that from the remains of their bodies new vines would grow. But is seems I had it the wrong way around.

“As they left their homes, the men took the most precious thing they had – cuttings from their many local varieties of grapevine – in case they might return home to find their villages razed and their vineyards destroyed,” explains Giorgi Barisashvili, a wine historian. “This way they could start their patrimony again, like a phoenix rising from the ashes.”

The story of the last 20 years in Georgian winemaking is not far from that kind of resurrection. At the start of the 20th century, Georgia could boast 525 native grape varieties.

By the 1970s, due to the collective Soviet winemaking regimes that favoured quantity over quality, wines were being produced in bulk from just four of these varieties. Now, thanks to painstaking work from many individual winemakers, the national collection is back up to about 460. For the Georgians, wine has become a symbol of the reclamation of their country’s rich cultural heritage: it’s been threatened many times but, luckily, not lost.