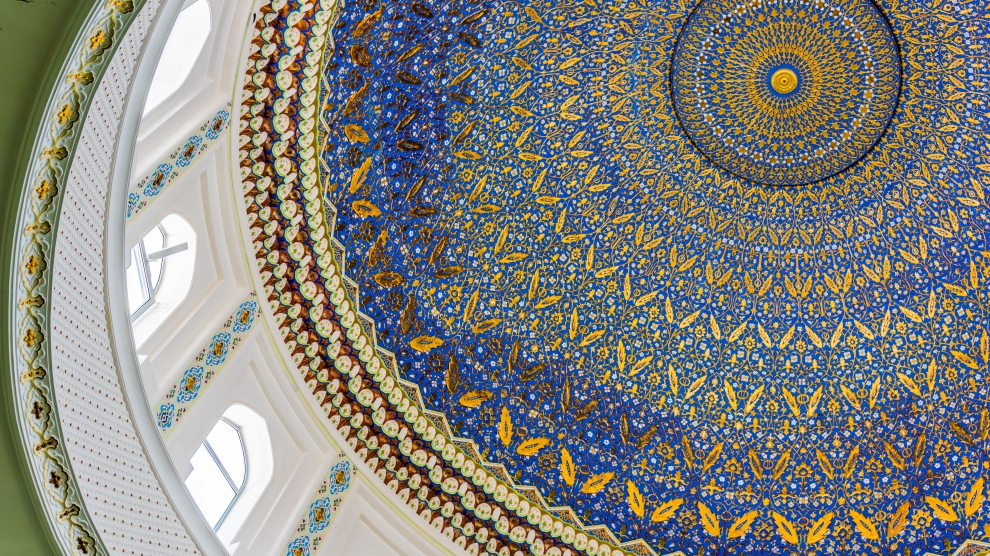 Uzbekistan sits at a crossroads of cultures, a genuine bridge between east and west. This has led to the nation developing a diverse cultural heritage and vibrant history, reflected in its jaw-dropping architecture.

This unique cultural melting pot, and a powerful ancient history, allows the story of the country to be told through the stunning structures that line the streets of its towns and cities. From grandiose palaces to intricately-decorated mosques and space-like modern towers, a journey through Uzbek architecture is a journey through time itself.

The first known settlers in the region were eastern Persian nomads, between the eighth and sixth centuries BC. The Uzbek plains soon became a center of civilisation, witnessing the campaigns of Alexander the Great and Genghis Khan, and prominent travelers such as Marco Polo.

The region quickly established itself as a cultural melange, the Silk Road bringing not just an exchange of goods, but ideas. Scholars, theologians, mathematicians and artisans fermented a cultural hybrid. This provided fertile ground for the creation of some of the world’s most unique and breathtaking architecture.

Ancient cities such as Samarkand reveal this colourful history, boasting some of the worlds best-preserved Islamic architecture. One of the city’s landmarks is the Bibi-Khanym mosque, a monumental 15th century feat, that was restored in the 20th century to its former glory. The construction began in 1399 on the orders of Amir Timur, the Turco-Mongol conqueror, and while it still upholds the traits of most medieval mosques, its sheer size is something to behold, with an immense dome towering 40 metres. And yet while it is the colossal size of the mosque that first catches the attention, it is the intricate detail that will keep it. The vibrant geometric patterns, adorned with an azure tile particular to Uzbekistan give the building an ethereal glow, emblematic of much of Uzbek architecture of the period.

Other gems of the epoch include Gur Emir Mausoleum, which again features the captivating azure tiles which dreamily meld with the sky behind. Ulugbek Madrasah and Sherdor Madrasa are other breathtaking examples of Uzbek style, deep blue, gold and sienna tiles adorning towering domes, to create overwhelmingly beautiful symmetry.

During this period, Uzbekistan was home to not only Islam, but Buddhism, Christianity, and Zoroastrianism as well as Judaism, creating a kaleidescope of religious architecture. The nation boasts some of the oldest synagogues in Central Asia, built by the Bukharan Jews.

These architectural treasures owe much to the wealth and prosperity brought to the region by the Silk Road, and now, many Uzbek cities operate as open-air museums, a testament to the nation’s layers of history.

By the time of the Bolshevik revolution and communist takeover, a different kind of architecture took hold. Striking Soviet-inspired towers in classic brutalist style clashed with the ancient designs, evoking a sense of confused identity. The Uzbekistan hotel in Tashkent, once a favoured spot for communist officials, sticks out in all its concrete bravado.

The Tashkent metro is a gem of a different nature, that resembles much of the beauty of Moscow’s grand metro stations. However, the sweeping marble columns have been seamlessly blended with ornate domes, and shrines to historical figures of the past – an architectural nod to something innately Uzbek.

Today, Uzbekistan is undergoing a different kind of architectural revolution. After gaining independence from a collapsing Soviet Union in 1991, and the advent of a more liberal presidency in 2016, the nation is beginning to establish itself with a new found sense of identity. Modern towers evoking space-like geometry, displays of neon lights and sweeping avenues are changing the face of Tashkent once more.

Now the country’s architecture is painting a new narrative, one of a modernised, outward-looking nation, as skyscrapers sit side by side with ancient mosques and Soviet brutalism. The results are breathtaking.