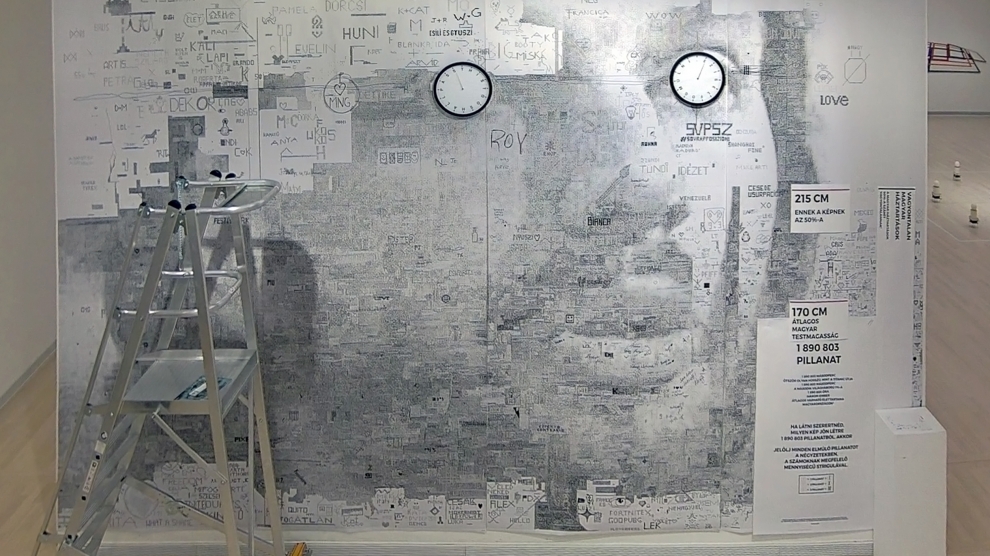 The Ludwig Museum, one of the most important contemporary art venues in Budapest, recently censored (or, as the author stresses, self-censored), a controversial portrait of Hungary’s prime minister Viktor Orbán, yet another case of a private institution bowing to the government.

The author of the portrait is János Brückner, a Hungarian artist now based in Berlin, known for a particular type of conceptual method, which he calls the human printer, for instead of imitating nature, he decided that his work would imitate the functioning of machines.

Invited by the museum to celebrate its 30th anniversary, Mr Brückner started working with the help of visitors who, piece by piece, created a giant image of Mr Orbán.

“The narrative of the exhibition, the location of the installation I have been offered and the situation in the country outside the walls of the museum were inspiring me by creating this work,” Mr Brückner tells Emerging Europe.

“The celebration of a 30th anniversary is to look back at the past and towards the future at the same time. In the case of the Ludwig Museum, this intersects with the happenings of 1989: a point when society, regimes, world systems and narratives changed in the whole so-called Eastern Bloc. Looking back in 2019 at the last 30 years therefore is a very important moment for the people in this region: both from the perspective of the perception of now and from that of 30 years ago. This reflection for me is a moment that holds the possibility to see how and why truths, beliefs and dreams have changed within this period.”

The installation, made in collaboration with the gallery Everybody Needs Art, started as a collection of white sheets of paper on a wall with two clocks, with instructions to the public on how to leave their marks. The final mural, titled Here and Now, portrayed Mr Orbán with a moustache, aged 30 and with the two clocks used instead of the eyes, each spelling out the phrase This Too Shall Pass.

“The installation was meant to be a direct imprint of the reactions of the visitors so, therefore, I had no expectations,” Mr Brückner continues. “The physical circumstances and composition of the installation however were created in a way that meant most people were only able to reach the lower half of the hidden image, making visible (together with and through the additional information about the unequal wealth distribution in Hungary and about the height of the southern border fence) the existing situation outside the walls of the museum.”

For the museum director, Júlia Fabényi, this work would have meant a negative public reaction and so she decided to exclude it from the exhibition. Mr Brückner didn’t consider the artwork as critical, but as realistic: the hidden image of a leader was coded in the installation but only visible through the curiosity-driven cooperation of visitors.

But when the installation was completed, Mr Brückner was summoned (together with Péter Bencze, founder of Everybody Needs Art), in order to discuss the situation.

“My reaction was surprise,” admits Mr Brückner. “I thought we created a very interesting installation and situation together with the museum and the audience, so I wanted to know what was the reason for this kind of reaction from the museum.”

Mr Brückner had never experienced any direct restriction or pressure from any institution regarding his work in Hungary before.

“What I could have experienced are the diverse manifestations of systemic fear and paranoia in the state-funded institutions and its people, when imagining the reaction of government people regarding certain works, but I refuse to sense this. I refuse to play the self-censorship game,” he states. “For me, this position is the manifestation and the actual use of what people used to call the freedom of expression. However, political formations, governments, state institutions, the manifestations of power in our societies, always like to tell or suggest people what to think and how to act.”

Mr Brückne is now looking to the future and has many projects planned. One of them will again be in Hungary, working together with the artistic formation We Didn’t Do It! Crew in collecting dreams Hungarian people (or people living in Hungary) have about Viktor Orbán.

“I am always excited to make visible something that wasn’t visible before,” Mr Brückner concludes. “The dreams are in this sense a realm of the uncensored and also unconscious but also not-realistic, wild, weird and crazy but still existing representation in people’s minds about the reality of the here and now.”