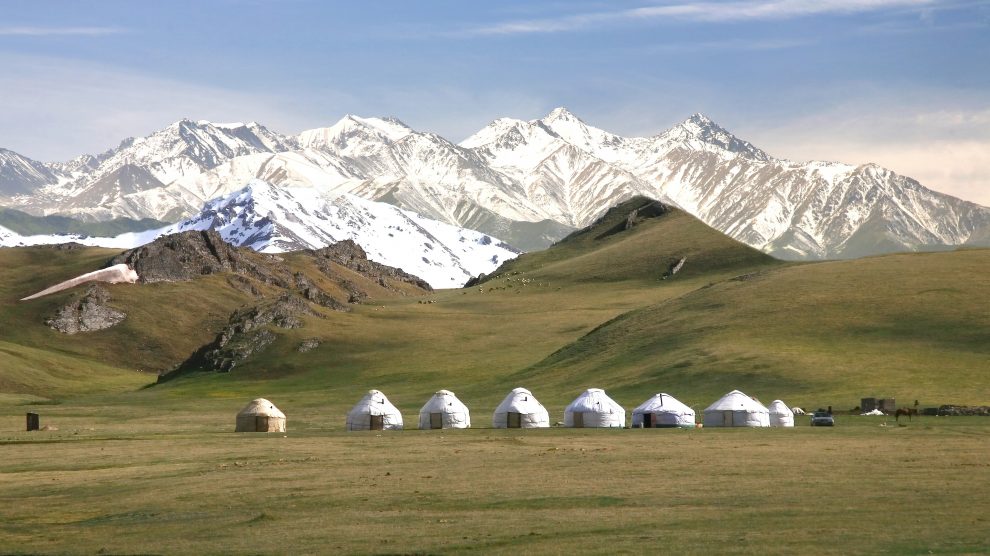 Forget Lapland, forget the North Pole. If Santa Claus really wants to visit every home in the world in one night, he should start his journey in Kyrgyzstan. We take a look at what this unlikely home of Father Christmas has to offer visitors.

Some say that Santa Claus lives at the North Pole, others that he lives in Lapland. However, according to the Swedish engineering consultancy company Sweco, if Father Christmas really were to reach every home in the world in a single night, the most efficient location for him to begin his journey would be the Central Asian country of Kyrgyzstan.

The country was quick to embrace its position as Santa’s new potential hub.  The Kyrgyz tourism authority adopted the slogan Kyrgyzstan is the land of Santa Claus in 2008, which it declared The Year of Santa Claus.

After a burst of interest from the outside world, the country even went so far as to call one of its previously unnamed peaks Mount Santa Claus.

Many observers found it curious that a Muslim-majority country like Kyrgyzstan would be so quick to embrace the idea of being the new home of Father Christmas. However, while 75 per cent of Kyrgyz citizens identify as Muslim, Christianity and Buddhism are also widely practiced, while almost 10 per cent of the population does not identify with any religion.

Some have praised Kyrgyzstan for the country’s comparably high levels of tolerance towards different religions. Others have attacked the country for going too far in its attempts to curb the emergence of extremist forms of Islam, instead encouraging traditional Central Asian forms of practicing the religion.

The idea of Father Christmas is not new for Kyrgyzstan, as a version of the character was introduced to Central Asia during the Soviet period. Known as Ded Moroz (Grandfather Frost) throughout much of the atheistic former communist world, he would present children with presents on New Year’s Eve rather than Christmas. As such, for many Kyrgyz, and other citizens of post-communist countries, the image of Santa does not necessarily bring associations with Christianity or even Christmas in particular.

But not only is Kyrgyzstan the mathematically proven perfect starting point for Father Christmas’s annual journey, the country is also something of an undiscovered winter wonderland. Almost entirely covered by mountains, winter in Kyrgyzstan can last from November to April, with temperatures rarely rising above freezing.

Here are some of the best winter experiences that make visiting Santa Claus’s new home worth it.

While the country’s first post-independence President Askar Akayev‘s ambition for Kyrgyzstan to become “the Switzerland of Central Asia” might not have become a reality in the political sense (to say the least), similarities between the two countries can definitely be found in their geographical composition.

Kyrgyzstan essentially has no plains; its lowest areas are between 500 and 1,000 meters high. Amongst the major mountain ranges on its territory are the Tian Shan and the Pamirs. The country’s highest peak Jengish Chokusu stands at 7,439 meters, the tallest in the whole Tian Shan mountain range.

Kyrgyzstan also offers varied opportunities for hiking and horseback riding. There is a considerably large choice of trekking trails, most of which were constructed during the Soviet period and are of varying degrees of difficulty.

Just 90 kilometres from Bishkek lies the scenic Kol-Tor lake area, which offers a 7.5 kilometre long trail showcasing typical Kyrgyz natural wonders, as well as opportunities for camping. More adventurous and skilled mountaineers tend to choose the much more challenging, but seemingly almost as popular four-day hike from Altyn-Arashan to the glacier lake of Ala-Kul located at an altitude of 3,500 metres.

Horseback riding is an important part of Kyrgyzstan’s nomadic heritage and most Kyrgyz children learning to ride a horse at a very young age. Horse trekking trips through the Kyrgyz wilderness are therefore a popular choice amongst those wishing to be fully immersed in Kyrgyz culture. Most travel agencies working in the country offer guided or self-guided horse trekking in the mountains of Kyrgyzstan.

Staying at a traditional yurt

Kyrgyz national pride is rooted in the nation’s nomadic roots. The pattern of the roof of a traditional Kyrgyz yurt can even be seen in the center of the Kyrgyz flag.

Even though most Kyrgyz today lead a sedentary lifestyle, various aspects of the traditional nomadic lifestyle have been preserved, including the art of constructing and decorating a yurt. Many Kyrgyz enjoy camping out in these yurts on occasion and are keen to convince foreigners how cosy these constructions can be.

Staying in a yurt when the temperature is below freezing and the ground is covered in snow might seem too adventurous for some, but traditional Kyrgyz yurts are specially designed to be warm on the inside and are often heated with wood stoves.

It certainly would not be a luxurious stay, but how many people can say that they have spent the night at a yurt covered in snow?

Kyrgyzstan, and Central Asia as a whole, are somewhat infamous for being amongst the worst destinations for people on a plant-based diet. As a landlocked nation with a nomadic heritage that largely excluded farming, the Kyrgyz diet is almost entirely based on meat and other animal products.

Amongst the most popular types of food are boiled mutton, horsemeat, sour cream, and yogurt, with camel meat being something of a delicacy in certain parts of the country.

This is not to say that Kyrgyzstan cannot be a foodie destination, however. Situated on the ancient Silk Road, Kyrgyz cuisine has many influences from both Middle Eastern and Chinese cooking, and in more recent years, from Russian and Eastern European food. Some hearty Kyrgyz recipes are particularly well-suited for the winter months, including the national dish beshmarbak (a noodle soup with meat), manti (Kyrgyz dumplings similar to the Chinese jiao zi and the Korean mandu), and samsa (meat pastries traditionally baked in a tandoori oven).

Overall, it is not hard to see why short-term visits to Kyrgyzstan have been growing steadily in the past few years. According to Culture, Information and Tourism Minister Azamat Jamankulov, eight million people visited Kyrgyzstan in 2019, of which two million are believed to have been tourists.

The majority of these visitors come from Russia and neighbouring Central Asian states, Kazakhstan in particular. However, travellers from places as diverse as Ukraine, Turkey, the United States, and South Korea are now joining them.

North Americans and most Europeans (apart from citizens of Albania, Bulgaria, North Macedonia, and Romania) are allowed visa-free entry into Kyrgyzstan and there are regular flights to Manas International Airport (25 kilometres from Bishkek) from Istanbul and Moscow-Sheremetyevo.

When international travel gets underway again next year, it might be worth taking a look at Kyrgyzstan.

Croatian Netflix drama The Paper is more relevant than ever
Where is Slaka?
Comment