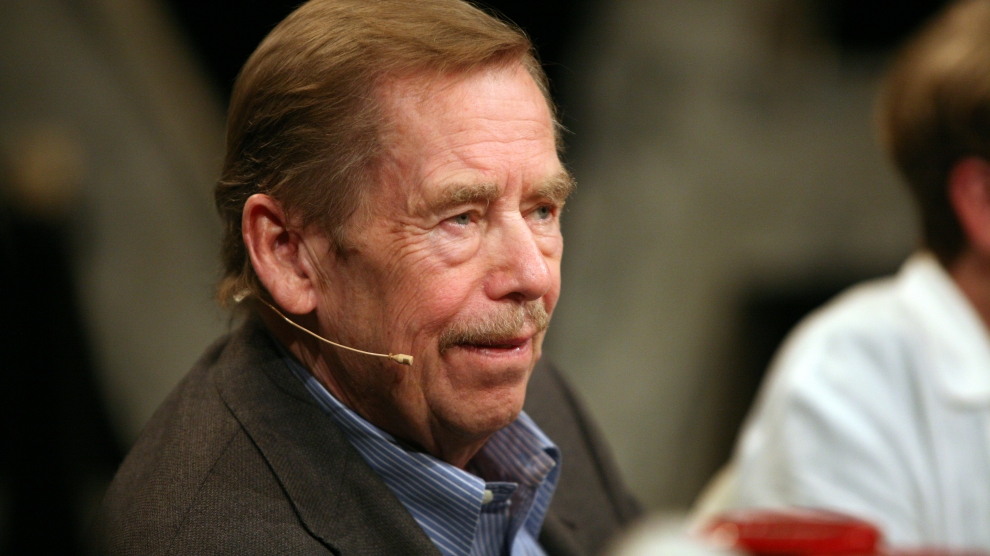 Playwright and president, Václav Havel was widely regarded as the moral compass of modern Czechia. The recipient of numerous peace awards and accolades, his career as first a dissident, then politician and statesman spans Czechoslavakia’s communist regime, the Velvet Revolution that brought about that regime’s demise, and the creation of Czechia. Yet his contribution to political theory is often overlooked, despite the pertinence of his work, even today.

Born in Prague in 1936, Havel spent much of his early years in a Nazi-occupied Czechoslovakia, only to then witness the communist take over in 1948. Dictatorship therefore set the background to his thinking, and the absurdities of one-party rule was a frequent narrative in his work.

His plays were central to his political involvement, but he was initially careful. Though works such as The Garden Party and The Memorandum, poked fun at the paradoxes of the communist regime, he avoided the dangers of making explicit attacks on Marxist thought.

However, the Czechoslovak Communist party could not tolerate Havel forever. After the Prague Spring of 1968 and the subsequent Soviet invasion and repression, much of the Czechoslovak dissident community channeled their criticism into art indirectly, holding up a fogged mirror to the regime at a time where too much clarity could harm. Here, Havel increasingly pushed his luck. His famous 1975 letter to Dr Gustáv Husák, then general secretary of the Czechoslovak party, led to tighter secret police’s surveillance, making it almost inevitable he would one day find himself in prison.

The letter is seen as one of the first expressly political works of Havel, which are often overlooked for his plays. However, Havel’s perspectives as a political philosopher and theorist, particularly from the Eastern bloc, is a significant contribution to the canon of political theory.

The letter to Dr Gustáv Husák came after almost half a decade of “normalisation”, acting as a direct address to the general secretary and highlighting the various repressions of the system and the indignities of communism. However, its tone is not a letter of protest or despair, rather a declaration of war that betrays genius in its subtleties.

He begins by addressing Husák as “Dear Doctor”, implicitly denying the legitimacy of Husák’s leadership of the Communist party, as well as the party’s very existence. He then delves into the nature of dictatorship, “Why are people in fact behaving in the way they do?” he writes, “Why do they do all these things that taken together form the impressive image of a totally united society, giving total support to its government?”

“For any unprejudiced observer, the answer I think is self-evident, they are driven to it by fear,” he answers his own question, “for fear of losing his job the school teacher teaches things he does not believe, fearing for his future the pupil repeats these things.”

This fear, he contests, is not necessarily a mortal fear, but covert and insidious – which is paradoxically worse. It waxes and wanes as people find ways to cope with the regime to the best of their ability, yet this ‘coping’ renders them complicit, and the whole cycle begins again.

“What is the effect on man of a system based on fear and apathy? A system driving man into a fox hole of purely material existence and offers him deceit as the main form of communication with society?”, he postulates, as the only aim of this system is superficial order and general obedience, regardless of the price.

Here, Havel places emphasis on the individual, seeking to understand the perpetuation of communism through discordant apathy. In fact, the way Havel sees it, the system in which he lives under can barely be labeled as communism, but rather a parasitic order that has been established in which an idea is sold as the veil to complicity.

Havel does not just critique, but offers an alternative. He believes that culture is the main instrument of self-knowledge, and is capable of enlarging liberty and leads towards truth, albeit indirectly. While this sycophantic elevation of culture is hardly surprising for a playwright, he touches on an element of hope. His work gives the sense that culture will shine through and fight back against entropy, and the aesthetics of banality. This optimism is especially remarkable considering the seemingly concrete position of the Soviet Union and its satellite states in the 1970s. Yet perhaps it was this optimism that enabled Havel to manifest his vision without restriction.

Shortly after the letter was returned to him, supposedly unopened, but with a stern warning, the situation for political dissidents became grave. When the music group The Plastic People of the Universe were arrested in 1976 by the Czech authorities, things become too much for Havel. He became one of the leading artistic figures to protest against their arrest and vocalised his condemnation of the regime’s human rights abuses in the famous Charter ’77.

This led him to write his most famous political work, The Power of the Powerless. In a lot of ways, this can be seen as a progression of his original ideas, albeit on a more powerful trajectory. Yet, it certainly lacked the subtleties of his letter, and has been labeled as a “manifesto of dissent”, beginning with “a spectre is haunting eastern Europe, the spectre of what in the West is called dissent,” a boldy ironic take on Marx.

He then explores what dissidents are, and their power within a seemingly powerless situation. He illustrates this with analysis of the actions of his greengrocer. His greengrocer puts a communist slogan in his window, just as he does carrots and parsley. He has been doing it for years unquestioningly out of routine apathy. He does it, according to Havel, because everyone does it, it’s a fact of life, and allows the greengrocer to be in harmony with society. In his typical absurdist fashion, Havel illustrates that this sign effectively says: “I know what I must do and behave in the manner expected, I’m obedient and dependable, and have the right to be left alone.” It is an admission that the greengrocer has accepted the rules of the game.

Yet this same greengrocer would not put a sign in the window saying: “I am afraid and unquestioningly obedient”, although, according to Havel its meaning is synonymous. For this would break the facade of ideology. An ideology that “offers human beings an illusion of identity, dignity and morality, while making it easier to part with them”.

This system of illusion works in harmony, as everyone in the society operates under this currency of ideology, a sub-current power structure that is rooted in reflecting vital interests, establishing a bridge between individuals and the components of the system.

Here, Havel views the communist regime as a form of self-regulation. Borrowing from Foucault, he establishes that with ideology, there is no need for show trials and rulers can be anonymised, as it is a dictatorship of ritual where power regularly passes through oneself, and through the mechanism of the system. This kind of self-regulation is covert and hence much more powerful than any third party repression. The signaling of the greengrocer to the state is his own self-regulation.

Yet what if this bridge was burnt?, Havel asks. What if the greengrocer stops, and revolts, stepping out of the lie and rejecting the ritual? What if he breaks the rules of the game and discovers his repressed identity, allowing him to live in the truth? Of course, he will be ostracised, sacked, but only through others playing by these same rules. It is here that Havel reveals his untamed optimism. He believes that one day this general panorama of signalling and ritual will cease and the emperor will be denounced as naked. Once the genie of truth has been let out of the bottle, it will not go back.

While this manifesto got Havel locked up, the same hope for truth led to his, and his country’s eventual step into the light. After rising to be a prominent dissident figure in the late 1980s, Havel was at the head of the Czechoslovak Velvet Revolution and his place as a figure of unity led him to become the first president of post-communist Czechoslovakia.

Although it may be easy to place Havel’s ideas within the context of communism and resign them there, this would be restrictive. This ritual of signalling and self regulation can be paralleled even today, almost a decade after his death, perhaps with social media, or even more subtle uses of communication such as language and body language. Havel implores us to not play by these rules that self regulate and restrict, to not worry about being harmonious within society, but instead to live within our truth.

While this idea, when stretched, may seem unrealistic and idealist, so too was his idea of ending the regime.

“The real question is this: Is the brighter future really so distant?”, he writes. “What if it has been here for a long time already, and only our own blindness and weakness has prevented us from seeing it around us and within us.”

Hiking Musala: The highest mountain in the Balkans
In an age of restricted travel, the world comes to Vilnius. Kind of
Comment