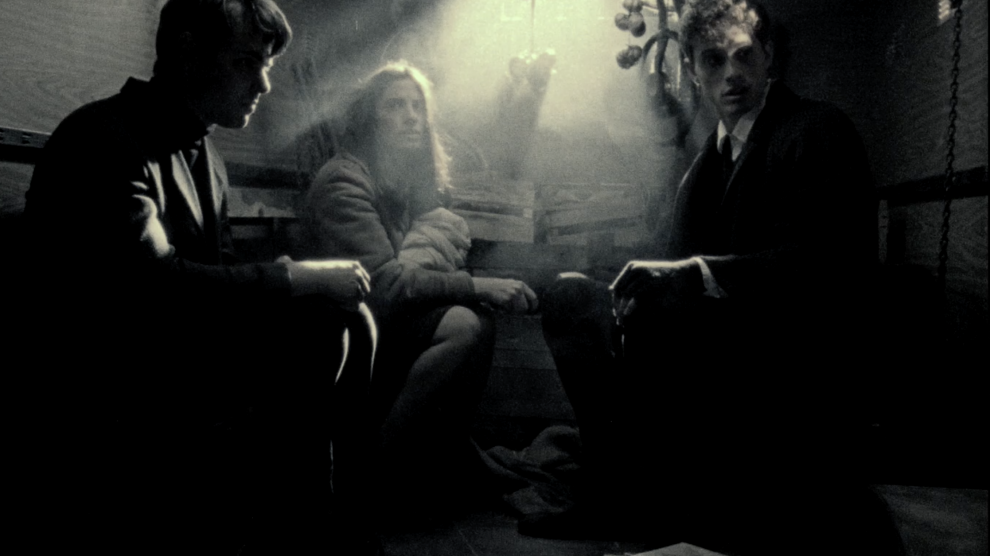 Political oppression is a tale as old as politics itself. For young Czech director Patrik Krivanek, the battle for freedom against political injustice served as inspiration for his new short film, Quiet Crossing, which in just four minutes provides a powerful commentary on the layers of moral complexities and personal sacrifice endured in the face of oppression – a commentary that is ever pertinent.

Quiet Crossing depicts three rebellious students in East Germany, played by Tullia Pagano, Matej Paprciak, and Jack Purkis, making a desperate attempt to escape to the West in the back of a food delivery truck. They must remain absolutely quiet. A sleeping baby, who could wake up and start crying at any moment, adds to the tension.

The whole film is shot from the inside of the van, in eerie 16mm film, creating an intimacy between the viewer and the characters. The claustrophobic tension is overwhelming and suspenseful. You can almost feel the cold, the dust coming through the cracks in the van, the bumps in the gravel road. The rich soundscape of rickety boxes, plosive footsteps, and GDR soldiers shouting for documents steps beyond good production and into the immersive. The choice to leave the film without music emphasises the paramount need for silence. Every little noise is heard, even the lighting of a cigarette. And with each noise, more tension is created. A sound too loud could risk discovery and almost certain death. In this sense, the film’s quietness is deafening.

While the film articulates 1960s East Germany, its director feels that the story is more important than ever – history always finds a way to repeat itself over and over, albeit in different forms.

“Even though Quiet Crossing is set in 1967, it tells a timeless tale that is still applicable to many people’s struggles worldwide today. Oppressive political regimes still reign,” he tells Emerging Europe, “families have no choice but to flee the tyranny of their home nations. The battle to truly be free from political injustice is still, for some, more difficult than ever before,” Krivanek tells Emerging Europe.

The film begins with facts and figures of the Berlin Wall. Without even seeing the words ‘wall’ on the screen, the viewer immediately knows the stark reality of the situation. “45,000 sections of reinforced concrete – three tons each. Nearly 300 watchtowers, over 250 dog runs, twenty bunkers. Sixty-five miles of anti-vehicle trenches…”

Without any need for a background story, the scene is well established. Despite Mr Krivanek and his producer Ella Eddy feeling that there were many similarities between this past and our present, they decided to keep the story set in 1967. “East Germany in the 1960s represented a “wall” for us. Exactly the same type of wall which is sadly still being built between nations all around the world,” says Krivanek.

For him, the film carries a personal link. “I was born in Czechoslovakia in 1987, the country, at that time, was still heavily oppressed by the communist regime in the same way the people in East Germany were,” Krivanek adds. “Stories like this were all around me during my childhood. At the time, I was very young and couldn’t fully understand the fear felt by the people, including my family, living behind the Iron Curtain. I didn’t understand why there was no freedom of speech; why people couldn’t talk critically against the government without the risk of being imprisoned or even executed. I also didn’t understand why travel was forbidden.”

Despite having researched the reasons behind fleeing, Krivanek went a step further and looked introspectively at his own family history. Only then was he fully able to understand the destructive penetration of such regimes. For the young director, it was especially important for this topic to be told through film. “I believe that stories like this need to be told over and over again. It’s more important now than ever because many young people take their lives for granted and ignore their history.”

What makes the film extra impressive is the fact that it was made as part of a university project with a tiny budget of under 1000 euros. With only three weeks for pre-production and just eight hours of studio time available, the pressure was extremely high. To make matters worse, the team only had two rolls of 16mm film available – every take was precious.

Setting the entirety of the film in a moving truck meant that the team had to creatively figure out the motions of a moving car. “We were able to create some movement in the set using strings and wires as pulleys. To support the feeling of movement, I also had to choreograph actors so they could deliver performances that were evoking a feeling of a car moving.”

For Eddy and Krivanek, creating an authentic and immersive set was paramount to the film’s overall impact. And it certainly worked. The claustrophobia felt watching the movie is a testament to their film making abilities. The tension of crossing the border is artfully communicated in such a short time and small space. It details the high stakes people are willing to risk fleeing persecution, and hence establishes a counter-narrative of the severity of oppression they are fleeing.

The film also explores a deeper commentary regarding the complex moral choices one has to make in such situations.

“The film should serve the viewer to experience and make their own opinions of how people, who are forced to emigrate, must undergo the reality of fear and often sacrifice someone else’s life in the fight for their own,” explains Krivanek. “With immigration, many lives change fundamentally, and often, these people will have to bear the consequences for the rest of their lives.”

As all good films do, Quiet Crossing forces the viewer to feel the full weight of sacrifice and consequence. What happens at the end of the film is entirely unexpected, and this depiction of personal experience does a brilliant job of illustrating something far larger. A fight against authority, political oppression and fear, in search of a better life.

However, in focusing in on an example of the GDR’s political oppression, the film arguably appeals to stereotypes of the communist state itself as entirely backward and violent, whereas the reality was much more complex. Nevertheless, Quiet Crossing is arguably not so much about East Germany itself, but something much larger: the innate human need for freedom and what price it is truly worth.

Quiet Crossing has been screened at 28 film festivals around the world and has earned eight awards. It is proof that stories of oppression and fear still relate strongly with many people today.

Krivanek says that there are currently plans to incorporate the short into a feature-length story focusing on the student’s rebellious fight that led them to make the fateful crossing. Regardless of where Quiet Crossing leads to, one thing is for sure, Krivanek is a talent worth watching.