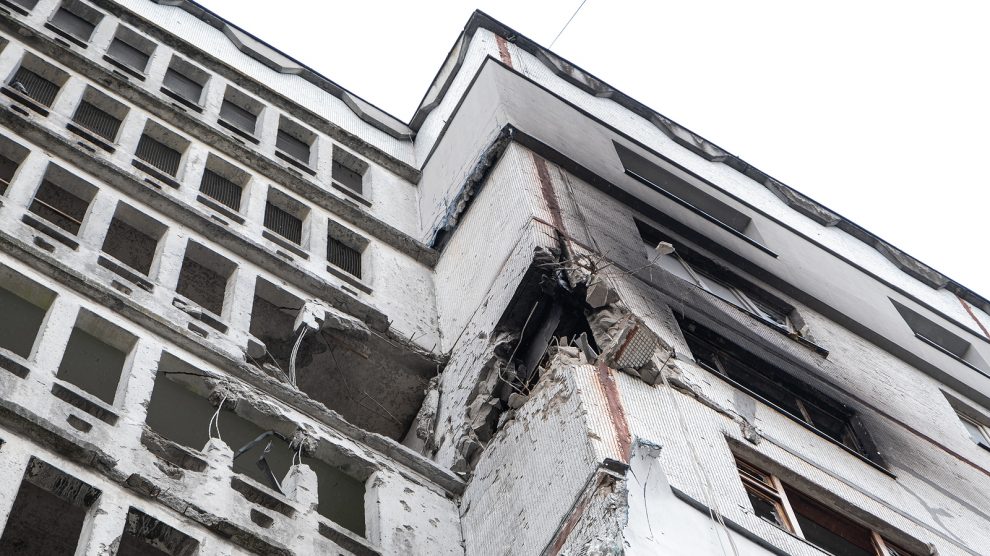 The Kyiv School of Economics Institute is making good use of AI technology developed by a Polish-US start-up to assess the damage caused to infrastructure in the Ukrainian cities of Bucha, Irpin and Mariupol.

The initiative collects, evaluates, analyses and documents information provided by government agencies, local authorities, citizens and others, on the damage inflicted to civilian infrastructure resulting from the Russian invasion.

It is effectively an open-source data project to evaluate and track the cost of war. According to the KSE Institute, as at September 5, 2022, the damage inflicted to the country’s infrastructure has been estimated at a cost of 114.5 billion US dollars as bombs tear through thousands of buildings, public utilities, and kilometres of road.

The start-up, Tensorflight, is an AI imaging-based insurtech automating commercial property inspections and claims processing, helping underwriters with risk assessment. Founded in 2016, its proprietary AI and computer vision technologies eliminate inaccuracies within property infrastructure data, significantly decreasing both the cost of and time spent on inspections in the insurance process.

In light of the vast areas of Ukraine affected by war – tens of millions of square kilometres of residential, commercial and industrial infrastructure – and the limitations attached to the analysis of drone imagery and eye witness accounts initially relied upon to inform damage assessments, the KSE Institute has sought external expertise to provide intelligence on a considerably larger scale.

Since April 2022, Tensorflight has been providing and analysing imagery from state-of-the-art satellites to assess the damage caused to infrastructure within Bucha, Irpin and Mariupol. The cities have a combined population of almost 570,000 (before the invasion) and span an area of approximately 387 square kilometres.

Tensorflight’s access to some of the highest resolution satellite imagery available on the market, together with its AI capability, is significantly accelerating infrastructure damage analysis with superior geolocation accuracy.

Through analysing satellite imagery and rooftop geocoding information, the start-up is able to offer insight into the extent of the damage caused to a particular building in the analysed areas, while also providing the exact geographic coordinates of the buildings.

They prepared a training dataset by manually annotating around 20,000 war damaged buildings on satellite images of war-torn regions of Ukraine. The dataset was then used to train Tensorflight’s deep learning classification model, which the firm says achieving accuracy rates of over 90 per cent with the potential to improve further following retraining on larger datasets.

To date, 61,188 buildings in Mariupol, 3,927 in Irpin, and 2,510 in Bucha, have been identified and analysed using Tensorflight’s deep learning model.

In addition to supporting the KSE Institute to track the cost of war, the project is also helping the Ukrainian government assess the reconstruction requirements of the country. For example, the intelligence will help inform whether to prioritise the rebuilding of a power station to prepare for the winter months, or a hospital or school based on the needs of residents in affected areas.

“The total amount of infrastructure damage since the start of war has reached hundreds of billions of dollars and is increasing on a daily basis. Tracking the damage resulting from the Russian invasion is an immense undertaking,” says Jakub Dryjas, CEO of Tensorflight.

Meanwhile, Maksym Nefyodov, the KSE Institute project lead, says that the start-ups technology is enabling Ukraine to access additional expertise in satellite, aerial and street-level imagery to eliminate inaccuracies within data, and to develop machine learning models to speed up imagery processing.

“The technology makes it possible to evaluate the exact level of destruction of housing and infrastructure facilities, and to carry out the most accurate damage assessment available today,” adds Nefyodov.

Tensorflight is continuing its damage assessment and will next analyse satellite imagery covering Lysychansk, Melitopol and Popasna.

However, with satellite imagery extremely costly – upwards of five million euros to perform wide-scale scanning of the 100,000 square kilometres of Ukraine still awaiting damage assessment – data becoming out of date because of further damage inflicted, and with limited funds to cover the cost of the imagery, the insurtech start-up is appealing for sponsors and partners to help finance its work.

Says Dryjas: “The work performed so far has provided great value to the KSE Institute. With current estimates undoubtedly lower than the true cost because losses from war are so challenging to quantify, we are keen to continue our collaboration and ensure provision of the most precise intelligence possible.

“Additional financing will help to cover the costs of the satellite imagery and will also allow us to provide more detailed analyses. For example, building type and granular information relating to the extent of the damage, as well as reconstruction cost estimations.”