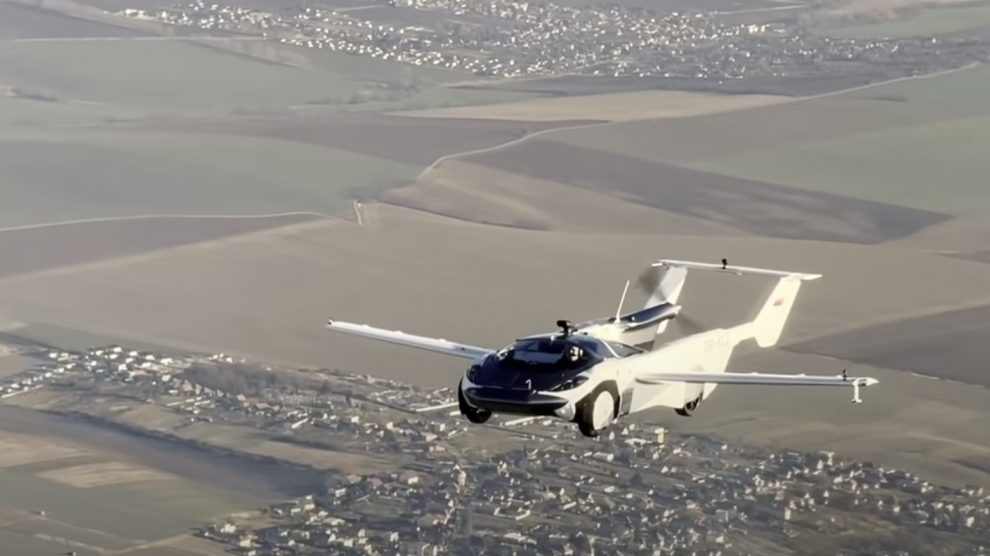 With the Slovak-made AirCar now officially certified to fly, cars in the sky are finally poised to leave the sci-fi realm and enter the commercial market.

Late in January, AirCar, a dual-mode car-aircraft vehicle, was issued an official Certificate of Airworthiness by the Slovak Transport Authority, following the successful completion of 70 hours of rigorous flight testing.

The tests were compatible with European Aviation Safety Agency (EASA) standards. The AirCar prototype performed over 200 take-offs and landings in fully automatic mode, without the pilot ever needing to touch the flight controls.

The car-aircraft hybrid reportedly impressed the civil aviation authorities with its stability throughout the flight manoeuvres, which included challenging 45-degree turns.

Where the road meets the sky

Developed by Slovak company Klein Vision, AirCar brings to mind scenes from science-fiction blockbusters like Blade Runner or the Back to the Future trilogy.

Upon landing, at a click of a button the aircraft transforms into a sports car in two minutes and 15 seconds, folding its wings along its sides.

AirCar’s freshly-minted licence to fly means that its pilot can now ask air traffic control for clearance to take off or land, just like in the case of any other aircraft. On top of a driving licence, the pilot is only required to obtain a sport pilot certificate to be able to operate the flying car.

“The certification opens the door for mass production of very efficient flying cars,” says Stefan Klein, AirCar’s inventor as well as test pilot. “This is an official and final confirmation of our ability to change mid-distance travel forever.”

“50 years ago, the car was the epitome of freedom. AirCar expands those frontiers by taking us into the next dimension, where the road meets the sky,” adds Anton Zajac, the project’s co-founder and chief advisor.

According to the BBC, Klein Vision is planning a test flight between Paris and London in the near future. AirCar is to be put on the market for commercial distribution within the next 12 months.

There are many who believe flying cars will help unclog existing infrastructures in the long run by taking mass transport to a brand new level. In 2019, US financial services company Morgan Stanley estimated that the budding sector could be worth 1.5 trillion US dollars by 2040.

With that much potentially at stake, a number of companies around the world are jockeying for a share of the market. The greatest challenge for such businesses is getting their vehicles certified for both air and road travel, a hurdle AirCar has just cleared.

According to Branko Sarh, senior technical fellow at Boeing, AirCar is now the global front-runner in the race.

“Professor Stefan Klein is the world leader in the development of user-friendly flying cars. His latest version is the pinnacle achievement in the category,” Sarh said after AirCar’s most recent flight tests.

“The automated transition from a road vehicle into an air vehicle and vice versa is not only the result of pioneering enthusiasm, innovative spirit and courage. It is also an outcome of excellent engineering and knowledge,” added Sarh.

AirCar boasts a BMW engine and comes with a ballistic parachute. It runs on regular petrol-pump fuel and burns 18 litres per hour when airborne.

The vehicle can carry two people weighing up to 200 kilogrammes, but the producer has also designed a four-seat version as well as twin-engine and amphibious versions. It is not, however, built for vertical take-off and landing, and requires a runway to fly.

AirCar Prototype 1 has flown at an altitude of 2,500 metres, reaching a maximum cruising speed of 190 km/h. The pre-production model, AirCar Prototype 2, is to be equipped with a more powerful engine allowing for cruise speeds of up to 300 km/h and a 1,000 km flight range.

The price? According to a Klein Vision spokesperson, the cost of the flying car will range between 550,000 and 1.1 million US dollars, depending on features.