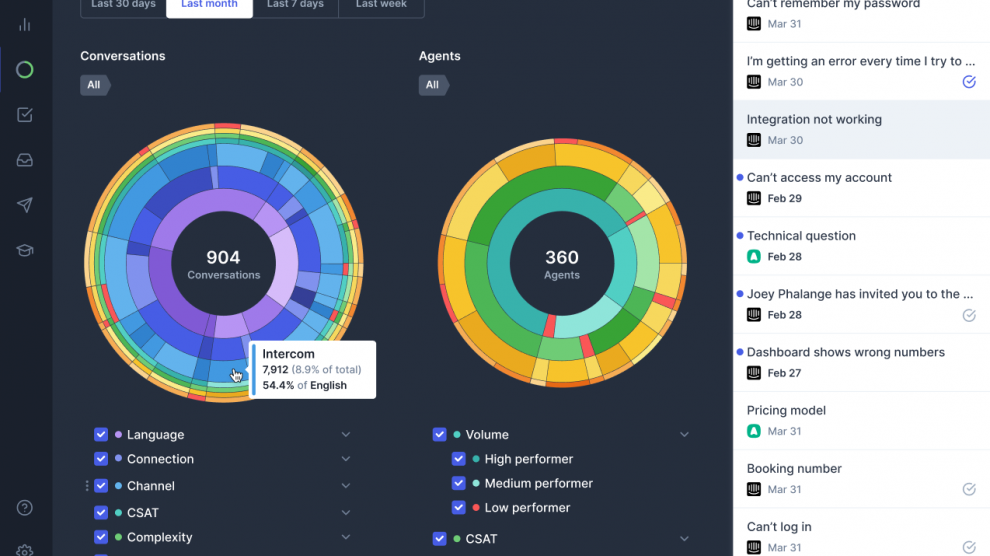 Klaus, an AI-powered platform targeting an end to bad customer service, has raised a 12 million euros in a Series A round of equity funding led by Acton Capital.

Joining the round were previous investors Icebreaker, Creandum, and Global Founders Capital. Klaus has found traction with hundreds of global enterprise customers, among them household names such as Glovo, SoundCloud, and Epic Games. The new round of funding will deepen Klaus’ core focus on product and engineering teams while bringing new growth through sales and marketing.

Klaus’ AI-powered review automation platform enables the analysis and 100 per cent coverage of customer interactions. It generates insights that are meaningful and can be relied on to bring radical service improvements to large and growing organisations struggling to maintain consistent service quality.

Klaus, based in Tallinn, Estonia, is currently analysing over two million conversations daily from its mostly enterprise-size customers. It breaks this data down into searchable, trackable information with relevant highlights brought to immediate attention before they can become problems. Klaus’ UI is highly customisable, industry-agnostic, and runs on a cloud-based SaaS model. ‘Feedback scorecards’ that rate and track conversation quality has been at the heart of Klaus’ offering from the beginning.

“The Series A funding means we can now scale our growth to the next level,” says Martin Kõiva, co-founder and CEO of Klaus. “To do that, we are seeking the best sales and marketing talent as well as adding to our team of PhD’d, data-science aces. As we hope to almost double our team in the next six months, we are excited that we have the resources to really find the best people.”

Deploying Depowise solutions is part of BPP’s commitment to enhance overall business reforms and improve its efficiency through digital technology. By adopting Depowise’s one-stop solution, BPP says that it will be able to improve the efficiency of the entire depositary life cycle from exploration to closure, ultimately allowing to scale its business.

As the depositary business falls into two main areas – UCITS and AIFs – Depowise has developed the best solutions for both types of investment funds, covering all their needs, activities, obligations, and responsibilities.

“We are proud that we consistently make sure to grasp the client’s needs quickly and provide the best solution that suits the market,” says Artur Reiter, the co-founder and CCO of Depowise.

“It has been clear for some time that asset servicers have been underserviced from a technology perspective, which is why Depowise was founded. In a very short period, we’ve managed to become one of the leading technology solutions providers for asset servicers. We are delighted to be able to support the digital transformation of BPP, increase the bank’s efficiency and enhance its competitive advantage. Ultimately, we are allowing them to scale the business and focus on what matters most – customers.”

With a 10 million euros investment to be allocated over the next few years, Bobnet Group is launching Bob IoT Enterprise, a new factory in Pitești, Romania, where it will produce innovative Internet of Things (IoT) devices, dedicated to the European market.

Bob IoT Enterprise will provide industrial-scale manufacturing of a wide range of IoT devices for automated retail and smart logistics, such as autonomous, fully automated stores, restaurants or logistic warehouses. Once validated through the Bob Concierge project, the technology will now be marketed to third parties as a stand-alone solution.

The devices built by Bob IoT Enterprise use an operating system based on IoT cloud technology that can be applied, scaled and customised for different industries and business needs, both for small companies and large retail networks. The use of Bob IoT Enterprise appliances in the Cloud IoT ecosystem will represent an important technological differentiation from other solutions on the market, ensuring 24/7 availability, real-time connectivity, high security and advanced processing power.

The factory currently occupies an area of more than 2,000 square meters and processes orders for more than 400 such devices. The total investment in the project will be between five and 10 million euros, depending on production volumes. The budget will be allocated in stages, in line with the volume of activity, and will gradually increase according to the increase in the number of orders.

“Our goal is to sell over 200,000 devices in Europe in the next 10 years. For this purpose, the company’s productivity will be gradually increased, to up to 30-40,000 devices annually, and we estimate that the number of employees will reach several hundred. The market for export will cover practically all European countries, including Eastern Europe. We do not rule out exports outside of Europe either,” says Darius Mihalcea, director at Bob IoT Enterprise.

The devices produced by Bob IoT Enterprise will be managed by the Bobnet group in the cloud, enabling grocery and grocery merchandising features, as well as logistics functions.

“We are on a mission to save nature on our planet. For a start-up, this is often seen as too massive a challenge, but acknowledgment from different organisations ensures we are on the right track,” says Merit Valdsalu, co-founder and chief executive of Single.Earth.

Individuals and businesses can now buy MERIT as a nature-positive contribution to achieving sustainability goals or as a virtual asset that helps build the world’s first nature-backed digital currency and, thus, integrate nature protection into our daily lives.

The Global ESGFinTech100 lists the most innovative tech companies every financial institution needs to know when they consider and develop their ESG assessment and performance improvement strategies. Single.Earth is one of the 100 companies chosen by a panel of industry experts and analysts based on a study carried out by data and research firm FinTech Global on over 500 ESG tech companies.

World Summit Awards (WSA) meanwhile said Single.Earth was nominated as the best national digital solution for Estonia for its annual award for digital innovation with an impact on society. With the nomination in the category Environment and Green Energy, Single.Earth is shortlisted for the WSA finals later in the year.

The international recognition comes at a time when Single.Earth launches the sales of MERIT, the world’s first nature-backed currency, which protects Amazon primary rainforests in Brazil and mature forests in Europe while also receiving a virtual asset representing the value of ecosystem services.

“We are on a mission to fight climate change and biodiversity loss to ensure our planet remains habitable for humans for generations to come,” says Valdsalu.

MERIT is a utility token that represents the value of nature and, more specifically, its ecosystem services. Each token represents 100 kg of CO2 captured in a biodiverse forest.

Single.Earth has focused on sorting out the shortcomings of today’s carbon credits, tackling the questions about biodiversity loss and why net-zero policies are still translating to mass extinction, although possibly on a somewhat less overheated planet.

The token can replace the classical carbon instruments and the voluntary market by looking at the world more holistically and factoring in the species and habitats besides carbon.

“The big vision behind the MERIT tokens is to become a global currency of a sustainable Net Zero economy,” says Valdsalu.