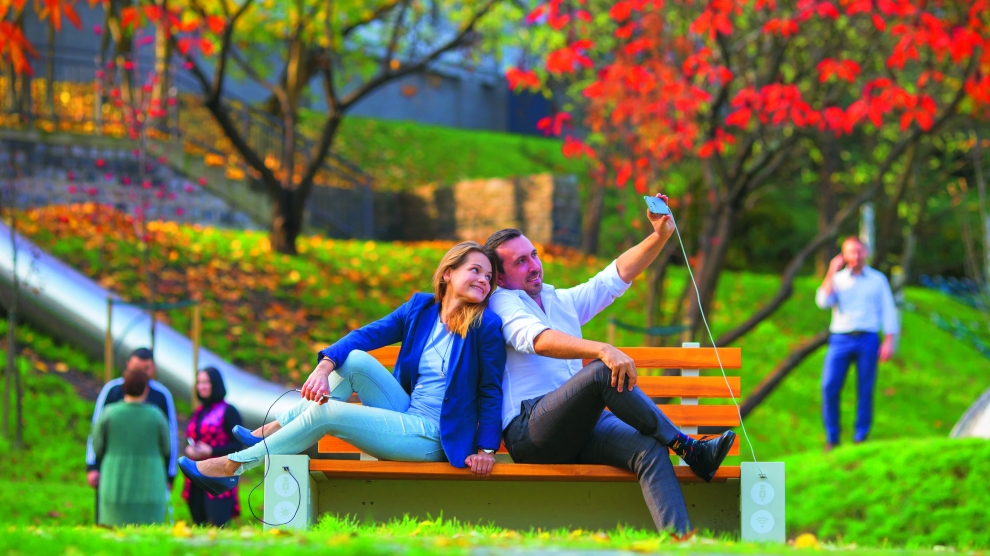 SEEDiA is a Polish company focused on manufacturing eco-friendly smart furniture with the aim of developing and implementing them into smart cities. SEEDiA is committed to continuous development, both in terms of functionality and new product lines, such as smart bus stops.

Artur Racicki and Piotr Hołubowicz, the founders of SEEDiA, combined their knowledge and experience to develop what they like to call the “bench of the future.”

Mr Racicki also founded Social WiFi which provides smart WiFi hotspots with a marketing analytics tool, which they have implemented into their smart benches. It is that functionality which sets SEEDiA’s benches apart from their competitors, providing free internet as an integral part of the benches.

“For our competitors access to free internet is a goal in itself, here it is only the beginning of our adventures with smart cities, marketing of places and promotional offers,” Mr Racicki says.
SEEDiA’s benches offer their users a variety of options such as USB chargers, contactless charging, solar panels, internet access, display screens.

“Smart WiFi is a modern tool which makes it possible to build behavioural profiles of smartphone users, and to target them though marketing actions, mailings, or individualised forms of communication,” Mr Racicki adds.

The benches can also collect data based on users who log into their network, they are also capable of providing analytical data that can be used to marketing actions and building customer loyalty.

“In addition to the features above the benches can be equipped with smog sensors, automated sources of information, detecting traffic density in particular regions of a city, providing details allowing for creating plans for city climate protection through identifying heat zones, displaying bus or flight schedules on an OLED panel or warning about incoming storms – those are only a few of the unique possibilities offered by SEEDiA,” Mr Hołubowicz explains.

At present SEEDiA have four collections of benches; SEEDiA Future, SEEDiA City, SEEDiA Urban and SEEDiA Invention. The benches and various models can be found all over Poland, in Warsaw as well as a number of other cities, most recently in the city of Ustka in the Pomerania region.

SEEDiA’s smart benches are generally targeted towards local governments, however they can be used in a commercial environment too, for example at large venues or hotels, airports or office buildings.