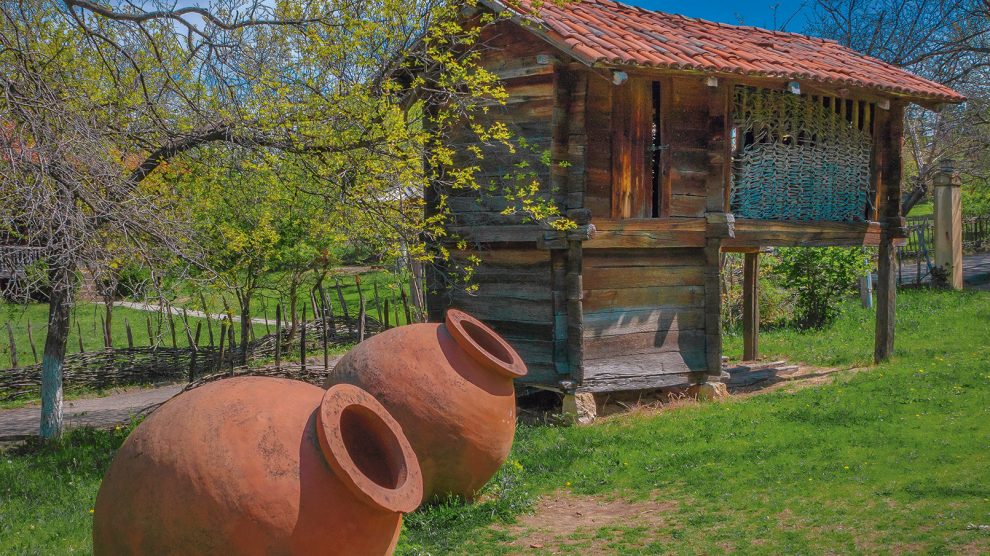 Recent archaeological finds suggest that Georgia may be home to the earliest example of grape-growing, winemaking culture anywhere in the world.

Late in 2017 earthenware jugs were found 30 miles south of Tbilisi, capital of Georgia. Researchers later announced that fragments of the jugs, 8000 years old, contained images of grapes and dancing men: signs of wine. This is now claimed to be the earliest evidence of a grape-growing, winemaking culture anywhere in the world.

Winemaking in earthenware vessels (qvevri) is an ancient Georgian tradition. The method has been recognised by UNESCO since 2013. A lot of Georgian winemakers use the qvevri method, especially in the Kakheti region, which can be said to be the homeland of Georgian wine.

The popularity of Georgian wine is increasing year by year and can now be found in stores the world over: the US, the EU, China, Japan. According to the Georgian Wine Agency, 2017 was a record year for wine export. More than 76.7 million bottles of wine were exported to 53 countries, an increase of 54 per cent compared to 2016.

“Today, the average price of Georgian wine is 2.27 US dollars per bottle,” says Giorgi Samanishvili, head of the National Wine Agency. “Our goal is to increase it to more than 3 US dollars. To achieve this we have created highly effective quality control systems. All exported wine passes through a certification process. Through private companies we have maintained quality but increased exports,” Mr Samanishvili told Emerging Europe. He believes the main priorities of 2018 are “to improve quality and find new markets.”

Work to increase the quality of Georgian wine started around 2006. At that time the Russian market was closed to Georgian products, and the number of small and medium-size wineries on the Georgian market began to increase. They started making natural, high-quality wine and exported it to EU and Asian markets at a high price. Today, these often family-owned wineries account for about 3 per cent of all Georgian wine production, and they have a significant role in growing the popularity of Georgian wine around the world.

One of the winemakers is Iago Bitarishvili. He produces about 5000 bottles of dry white wine, called Chardakhi, each year. Almost 100 per cent of his wine goes for export, to 11 countries.
“Wine is not only business. I love what I am doing,” Mr Bitarishvili told Emerging Europe. “As a painter is concentrated on the quality of painting and not quantity, and feels pleasure in the process of creating, winemaking is the same for me. We produce a limited amount of only the highest quality wine. That’s why the Italians call us natural winemakers guerrillas.”

“The only thing we use in wine production is wild yeast,” said Zurab Mgvdliashvili, founder of Nikalas Marani. “There are risks involved because there are times when challenges appear in the process. However, we refuse to use chemical and technological interventions, such as wine acid, tannins or other substances. The only thing we allow is a minimal amount of sulphur.” Mr Mgvdliashvili started wine production in 2013 and produces around 2000-5000 bottles of wine. Part of it is sold on the local market, and some is exported to the EU, Japan and the US. His best-selling wines are Sapheravi, Kisi and Mtsvane. Like Iago Bitarishvili, Mr Mgvdliashvili does not see any need to considerably increase the amount of wine he produces.

“In general, the bestselling Georgian wines are Sapheravi, Mukuzani and Kindzmarauli (all red wines). The dry red wine is the most popular in Asia, while Europeans love dry whites. In the US the favourites are earthenware vessel wines, while in the post-Soviet countries they prefer semi-sweet wines,” said Giorgi Samanishvili.

Wine plays a significant role in Georgian tourism. The project Wine Route began in 2011 and brought tourists to the wineries of Georgia. Lots of small and medium-sized wineries now host local or foreign tourists. One of the most popular wineries is Iago Winery Chardakhi, around 35 kilometres from Tbilisi. Iago Bitarishvili says that last year was the busiest ever for his winery. So much so that the wine ran out, and he could not manage to export to three countries where demand was high.

It is worth mentioning that one of the most significant drivers of growth in the Georgian wine industry is the Wine Festival, which began in 2010 and takes place every second Saturday of May in Tbilisi. Mr Bitarishvili is one of the founders of the festival and says that the event provides optimism to small and medium-sized wineries, who can connect with current and future customers.
Foreign tourists also play a prominent role in the popularity of Georgian wine. Some of them already know about local wine before arriving, while many try it for the first time while they are in the country. Besides wineries, part of the enotourism boom has been in wine bars. The first opened in 2011 and the number of natural wine bars is increasing every year. The bars are favourites not only among foreign tourists but increasingly with locals as well. Giorgi Samanishvili believes that cultivating a wine drinking culture is crucial.

“It is worth remembering that consumption of wine on the local market is important for the international image of Georgian wine,” he says. “To achieve this, we arrange different types of events which support winemaking and make it more popular. As the local population consumes dozens of litres of wine, one of our priorities is to increase the quality of wine not only for export but for the domestic market as well.”

At the beginning of 2018, a free trade agreement took effect between China and Georgia, which is another possibility for Georgian wine export. According to Giorgi Samanishvili, head of the National Wine Agency, in 2017 more than 7.5 million bottles of wine were exported to China, and expectations for this year are considerably higher.

The five-year goal for the agency is to increase wine exports to 100 million bottles while preserving quality. There are reasons to believe that they will succeed. A new generation of winemakers are providing many reasons to be optimistic about the future of Georgian wine.