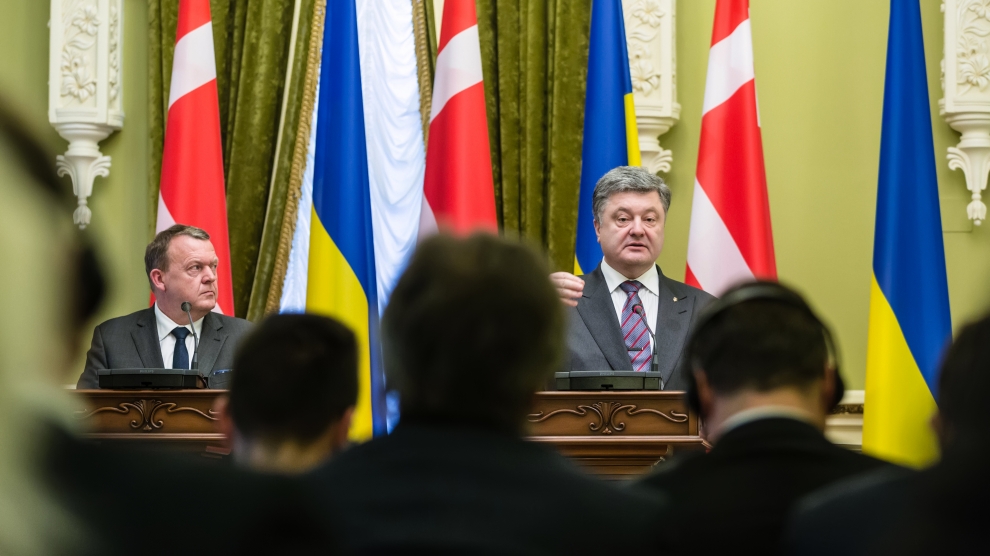 Ukrainian President Petro Poroshenko felt quite content, during his visit to Copenhagen in early April 2017, when he heard leading Danish companies that already work, or plan to invest, in Ukraine say that they had already noticed practical results of the reforms. “This is a very good advertisement for potential investors to come and work with us,” he said at a joint press conference with Danish Prime Minister Lars Løkke Rasmussen.

“During the business roundtable with the President, hosted at the Confederation of Danish Industry, I did not hear a single company not giving positive signals about Ukraine; no reservations,” says Morten Munk, Consul of Ukraine to Denmark and CEO of Mafcon. “That enthusiasm is driven by the combination of reforms and financing injected into the country from the IMF and the European Investment Bank that will foster development,” he added.

Mr Munk’s optimism is backed by a recent review of the inbound deliveries to Ukraine from Denmark showing more than ten per cent volume growth over the last 12 month.

But there are more reasons for President Poroshenko to be happy — companies such as Carlsberg, Axzon, Cimbria, Ciklum and Jysk have been successfully operating in his country for quite some time, and they have continued their operations even in the times of crisis and have even helped transform the market.

“Carlsberg now has three production facilities in Ukraine. They have changed the local habits and have made beer a drink that is consumed when socialising. Today, Axzon is Ukraine’s second largest producer of pork and is now investing in meat processing. Together with these large players, there are about 150 companies with Danish capital operating in the country, mainly in Western Ukraine, and there creating the largest cluster of Danish manufacturing companies outside the EU. Danish investments in the region have directly and indirectly generated approximately 13,000 jobs,” Mr Munk adds.

Actona, which has been producing upholstered furniture in the outskirts of Lviv since 2008, currently employs about 500 people and is planning to hire 100 more in the upcoming months. “We have had our challenges, for example, related to the depreciation of the hryvnia, but we still believe that Ukraine is the right place for manufacturing,” Torben Villadsen, Actona’s CEO, tells Emerging Europe.

What makes Ukraine such an interesting destination for Danish companies? Jakob Ekholdt Christensen, senior analyst at Danske Bank, says it’s a combination of things. “Very low salaries, which are even more competitive after the devaluation of the hryvnia, together with a well-educated work force and the proximity to the European Union, especially in the case of the western part of the country,” he adds.

On top of that are the unlimited opportunities and contribution to the country’s growth.

“In Western Europe, Scandinavia, everybody does the same things in the same way and everything is simple. For me, it means a lot that I am in the region where I can make a difference. I have always had a passion for this region,” says Leif Midtgaard Pedersen, Managing Director at ICT Logistics, which has been providing transportation services and warehouse facilities in Ukraine since 2006, and had previously done business with the Soviet Union in the late 1980s.

“Ukraine is an interesting market for us. One of the reasons is that there are a lot of Danish investors here and they have manufacturing facilities producing furniture, agriculture machinery and shoes, etc., and there are a lot of goods moving between Ukraine and Denmark on a daily basis,” says Helge B. Olesen, Sales and Marketing manager at Uno Transport, which established an office in Kyiv in 2011.

“The thing that makes Denmark a strong investor in other locations is that we tend to cluster together in small areas which leads to our building a strong community,” Lars Vestbjerg, the Founder and President of the Danish Business Association and General Manager of Sika Footwear in Lviv, tells Emerging Europe.

Actona’s Mr Villadsen says that despite so many success stories for Danish companies in Ukraine the country’s image in the Danish media is not very positive.

“The picture is very clear, with three main questions being asked: First of all, is it safe there? Then, what about corruption? And thirdly, why is it all so difficult,” says Consul Munk.

Danske Bank’s Mr Christensen thinks the image that the Danes have of Ukraine is one of high risk related to the military conflict that Ukraine is involved in with its large neighbour as well as the challenges of getting a stronger economic performance. “That makes people less inclined to see the potential positive image of the country. I agree that may be quite a contract with the strong performance of Danish companies operating in Ukraine,” he says.

Mr Munk confirms that corruption is manageable in Ukraine. “A solid legal platform, capable management and transparency in business place you on the safe side and this also makes business easier — because you know what to do,” he adds.

Jørn Fredsgaard Sørensen, Director of Country, Bank & Sector Risk at EKF — Denmark’s Export Credit Agency – says that lots of Danish companies operating away from the conflict zones in the East, in western or central Ukraine, would say that the crisis doesn’t affect them.

“However, statistics show that the recession is not far behind us and that lots of local companies still struggle. My impression is that the general perception is reverting to the state where most business people focus on the positive prospects for Ukraine. It is definitely true that Ukraine has great potential in the long run. The reform process is not running very quickly however, and there is a risk of a backlash because of the threat to certain interests that benefit from the current state of affairs,” he adds.

ICT Logistics’ Mr Pedersen believes even more business would come to the country if the situation in eastern Ukraine was resolved. “Every business person knows that once Ukraine has a more stable situation, investors and trade partners will flock. The country, with its population of 44 million, needs pretty much everything,” he says.

For example, in April 2017, the Danish Board of District Heating is organising another business mission for its prominent members to Ukraine within the last few years. DBDH wants pave the way for transfer state-of-the-art district heating knowledge and technology from Denmark to Ukraine. A sector, that has been suffering from lack of maintenance and upgrades.

The European Investment Bank (EIB), the Nordic Environment Finance Corporation (NEFCO), the European Bank for Reconstruction and Development (EBRD) and others have already allocated financing in the level of €1 billion for upgrading the country’s municipal infrastructure.

Silhorko-Eurowater, a water treatment company, already works in Ukraine. “A main goal for our customers has been to improve standards in order to meet the stringent regulations of the European market,” says Jens O. Gjerløff, marketing manager at Silhorko-Eurowater.

In 2016, Danish exports to Ukraine were worth €230 million, while Ukrainian goods were imported for a value of €107 million.

The Danish Ambassador to Ukraine, Ruben Madsen, says that both sides confirmed very promising prospects for increased business cooperation in light of a growing commercial interest in the Ukrainian market from Danish companies.

Jens Holst-Nielsen, director of market development at the Confederation of Danish Industry, says there were a lot of valuable concepts established during the President’s visit and the sectors where he sees the largest potential are energy and agribusiness.

“Denmark will not let Ukraine sink into oblivion in the middle of the world’s other crises and conflicts. Ukraine has Denmark’s support,” Lars Løkke Rasmussen, Danish Prime Minister said at the joint press conference.