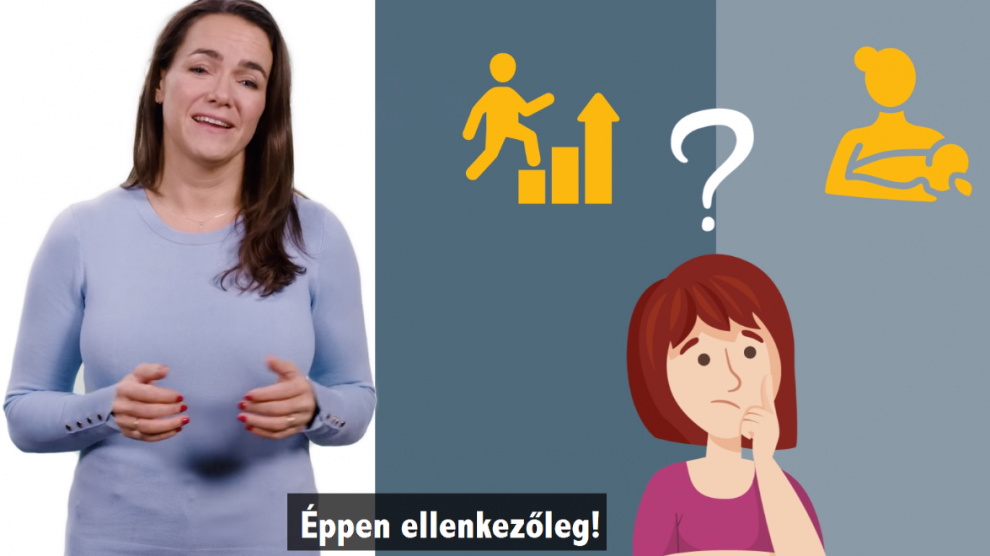 A new law that prohibits adoption by non-married couples and a female minister telling women that they shouldn’t expect to earn as much as men. It’s been another dark week for human rights in Hungary.

It would appear that attacks on women’s rights in Hungary are not the sole remit of its male politicians. The country’s family minister, Katalin Novak, a woman, doesn’t appear to think much of women’s empowerment either.

Lydia Gall, a senior researcher for Eastern Europe and the Western Balkans at Human Rights Watch, wrote earlier this week that “I nearly choked on my coffee” when she watched a misogynist propaganda video featuring Hungary’s minister responsible for families, Katalin Novak, lecturing Hungarian women on how to be successful.

The video – which does not appear to be in any way tongue-in-cheek – includes “advice” on how women should not always compete with men or expect to receive the same pay.

Rather, women should relish their roles as child bearers and caregivers, says Novak, while adding that Hungarian women shouldn’t give up their “privileges over some misguided fight for emancipation.”

Novak introduces the video by discussing the importance of following baking recipes, “driving home the ‘your place is in the kitchen’ message for women,” writes Gall.

“Not only is this offensive and patronising to millions of women in Hungary who struggle for equal treatment, it comes as the Covid-19 pandemic has fuelled a sharp increase in reports of violence against women across Europe, including Hungary,” continues Gall in her article.

“Instead of strengthening protection for domestic violence survivors, in May the government refused to ratify a treaty, known as the Istanbul Convention, which is designed to protect women from violence. The Covid-19 pandemic will also likely exacerbate Hungary’s ever-increasing gender pay gap, as women take on even greater burdens of unpaid care work and are more likely to work in sectors facing job or wage losses. But rather than actively seeking to bridge this gap, the government chooses to view women as ‘baby-making machines’.”

According to the Hungarian Central Statistical Office, women in Hungary earnt on average 15.6 per cent less than men between January and September of 2020.

Also this week, in a further blow to equal rights for LGBTQ people in the country, the Hungarian parliament passed a bill prohibiting adoption for non-married couples and amend the country’s constitution stating that “mother is a female and father is a male” and that Hungary “protects self-identity of the children’s sex by birth”, which would further stigmatise transgender and intersex people in Hungary.

“This is a dark day for Hungary’s LGBTQ community and a dark day for human rights,” said Director of Amnesty Hungary David Vig. “These discriminatory, homophobic and transphobic new laws – rushed through under the cover of the coronavirus pandemic – are just the latest attack on LGBTQ people by Hungarian authorities.”

Masen Davis, executive director at Transgender Europe added: “Earlier this year, Hungary made it impossible for trans people to change their names and legal gender marker. We are deeply concerned for the health and safety of trans children and adults in Hungary in such a hostile climate. We call upon European Commission President [Ursula] von der Leyen to address the rights of LGBT parents, the attempt to erase gender diverse children, and the ban on legal gender recognition in the Commission’s rule of law assessment and on-going Article 7 TEU proceedings against Hungary.”

The new legislation barring gay couples from adopting children comes at a time when Prime Minister Viktor Orbán’s far-right government is dealing with the downfall of a key official in a sex and drugs scandal.

An MEP from the ruling Fidesz party, quit at the end of November after he was caught attending what Belgian media described as a “gay sex party” in Brussels.

The MEP, József Szájer, initially pleaded parliamentary immunity but is now under investigation for both non-compliance with measures relating to the Covid-19 pandemic and violation of drug laws.

Szájer has previously boasted that he personally drafted changes to the Hungarian constitution that defined marriage as being between a man and a woman.