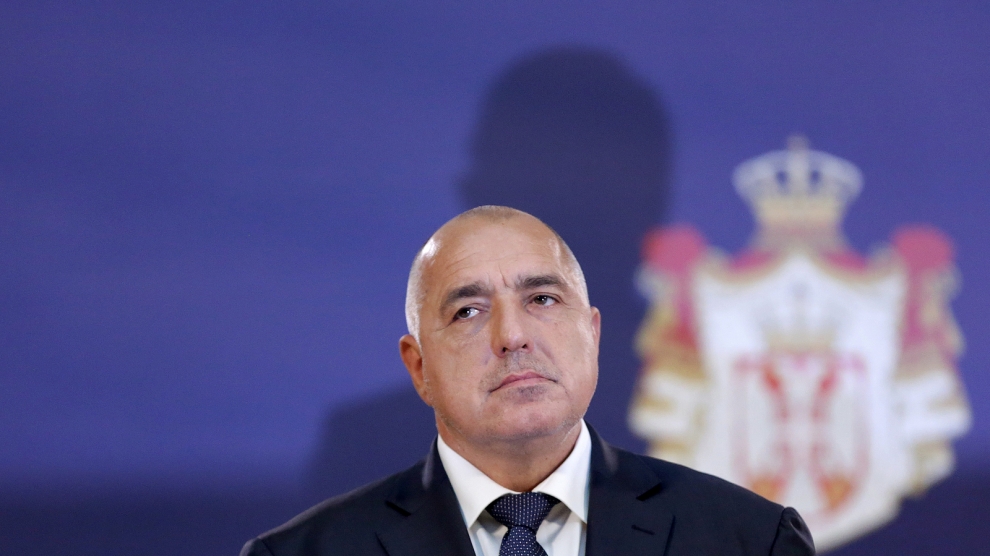 As protestors against institutionalised corruption in Bulgaria enter their 10th week, the country’s embattled prime minister Boyko Borissov has begun the process of drafting a new constitution. However, many see this as a move that will do little except strengthen the ruling GERB party’s grip on power while ignoring the demands of protesters, who since July have been taking to the streets of Sofia shouting “resign” and “mafia”. The prime minister is not their only target: they also want prosecutor general, Ivan Geshev, out of office.

Mr Borissov’s response has been to label the protesters tools of the country’s opposition, or as criminals. Last week nevertheless saw a botched attempt at appeasement. In an attempt to provide a “restart” for the country, on September 2 Mr Borissov successfully managed to pass through parliament a procedure that will allow for the drafting of a new constitution, one which will, according to him, “offer an overhaul of Bulgaria’s political system”.

The fact that the procedure mustered the 120 votes needed (Bulgaria’s parliament has 240 seats) surprised many, given that the previous day oligarch and leader of the Volya party, Vesselin Mareshki, said that his MPs would abstain. However, Borissov’s GERB, together with Volya and the nationalist IMRO party, got the bill over the line.

It has been suggested that the IMRO only agreed to the new draft after considerable concessions were made to its nationalist agenda, including anti-Roma and anti-LGBT provisions, mandatory voting for people who have studied up to the age of 16 and the return of compulsory military service.

Until now, unlike his illiberal counterparts in the region, Mr Borissov has restrained from being vocally discriminatory towards historically-oppressed groups. The deal with IMRO, his junior coalition partner, therefore signifies a change in attitude.

Contrary to Mr Borissov’s claims that the new constitution will reset the country, and his hope that it would reduce the number of protesters, anger amongst those on the streets of Sofia has only grown.

Petar Cholakov, an author and journalist at Deutsche Welle, and a senior lecturer in political conflict at the Bulgarian Academy of Sciences in Sofia, tells Emerging Europe that Mr Borissov has succeeded only in buying time, given that pushing through a new constitution will require 160 votes in parliament. “In order to actually pass a new constitution, Borissov will need the support of the Movements for Rights and Freedoms party. However, supporting [the new constitution] would be political suicide for the Movements.”

Moreover, Hristo Ivanov, the leader of Yes! or Da! Bulgaria party, one that vehemently opposes the GERB, said that the prime minister is just “pouring oil on the fire”.

“I don’t think Borissov has in any way has blunted the protests,” he said. “Essentially they’re occupying political space to gather more money, to turn this money into media propaganda, to buy more votes and give more bribes,” Mr Ivanov said on Facebook. “This is their life cycle.”

Furthermore, according to legal experts and opposition figures, the prime minister’s claim that a new constitution will ease protesters worries of corruption is baseless. Rather, the new draft shows purely cosmetic changes, and lacks the key elements of checks and balances, such as requiring stricter accountability from the chief prosecutor.

Cosmetic fixes appear to be the order of the day from the prime minister, however, who last Thursday announced the appointment of a new justice minster to replace Danail Kirilov, who had faced criticism for his failure to tackle corruption. However, parliament simply elected Mr Kirilov’s deputy, Desislava Ahladova, as his replacement. She too has also faced criticism for misdealings.

Unsurprisingly, these moves did not satisfy protesters’ demands, and in many cases accentuated their frustrations. That same night, the streets of Sofia saw one of the largest demonstrations this year.

According to one protester, Nona Dimitrova, who studies at university in London, “Borissov’s claim that a new constitution will ‘restart’ the country is empty.”

“He’s ignoring what the protesters are asking for and is simply trying to win himself more time. But even then, I wouldn’t say he’s been weakened — I think given the nature of Bulgaria as a country, he realises his power, and any claims or promises he makes outside a resignation are futile,” she tells Emerging Europe.

The protests on the night of September 2 were some of the largest the country has seen in its recent history. According to the capital’s chief of police Georgi Hadjiski, tensions were high and 80 police officers were injured by smoke bombs, fire crackers and stones, which he claims were used as weapons. More than 100 demonstrators were arrested.

During clashes, police started chasing and arresting people at random, including those peacefully demonstrating or reporting on the protests.

After the situation had calmed down, a visibly shaken young woman told journalists: “there weren’t just provocateurs in the front row [of the protesters], there were regular people too. I was chased but managed to hide.”

BTV journalist Kanna Racheva was among those doused with pepper spray, while another reporter for national television, Nikolai Minkov, was hospitalised after passing out.

Dmitiar Kenarov, a freelance journalist, translator and poet also suffered from police violence, posting a photo on twitter of his bruised and bloody face. “I was grabbed by the police, thrown to the ground and brutally kicked in the head. My camera was taken away and I was made to stand for hours in handcuffs on the sidewalk. I identified myself as a journalist numerous times to no avail.”

The Union of Bulgarian Journalists has since issued a statement condemning the violence against journalists.

“We reject attempts to pass the blame for the violence on to the protesters,” said the organisation, “and to equate the thousands of peaceful demonstrators with a handful of obvious provocateurs, whom the police were obliged to isolate and neutralise in a timely manner and without harm to other citizens. Instead, indiscriminate repression was unleashed.”

The president, Rumen Radev, a member of the opposition Bulgarian Socialist party (BSP) and a vocal critic of Mr Borissov has consistently come out in support of the protests. “It was not the lack of a new constitution that brought the people on the streets, but the lack of morality in the leadership, the erosion of statehood and the corruption,” he said.

GERB’s response to the protests is to ironically affiliate them with a “criminal underworld”.

“After yesterday’s excesses, we will not resign, because if this happens, it will mean that any government can be overthrown by a criminal contingent,” MP Toma Bikov said on Thursday morning in a statement on behalf of GERB. “Radev demanded a radicalisation of the protests and yesterday we witnessed what this can cause.”

Mr Radev’s vocal support of the protests has often been manipulated by the ruling party to claim that the people are being pulled in by Mr Radev, despite repeated statements that they are not affiliated with any political party, but merely against the suppression of freedom.

This has been a common narrative since the beginning, when the protests were sparked by a scandal at a Black Sea beach, where Mr Ivanov – in a carefully staged stunt – managed to expose the fact that national security forces were restricting access to a public beach and protecting the property of an oligarch and veteran political of the Movements for Rights and Freedoms party, Ahmed Dogan.

A day later, president Radev called for the prime minister’s resignation, and shortly after, Mr Borissov retaliated with a raid on the presidential administration.

For a country consistently ranked as the EU’s most corrupt, this was the final straw for a population disillusioned with the political process and embittered by what it sees as a total lack of rule of law.

Two months on, the protests show no signs of slowing down, especially after Mr Borissov’s latest move. However, Mr Borissov shows no sign of relenting either, and the country is in deadlock.

For Ms Dimitrova, who participated in the protests, the protests alone will not lead to the resignation of Mr Borissov. “My hopes are that the protests will raise awareness and inspire more people to cast their vote, and/or form a united front and understand what or who they’re voting for,” she says.

However, according to Dr Cholakov, Mr Borissov’s next move very much depends on the behaviour of the Movement for Rights and Freedoms party. The Turkish ethnic minority party, despite having just 25 seats in parliament, has a hand on the levers of power through Delyan Peevski, one of its politicians and according to Reporters Without Borders (RSF), “the most notorious embodiment of this aberrant state of affairs, who ostensibly owns two newspapers (Telegraph and Monitor) but also controls a TV channel (Kanal 3), news websites and a large portion of print media distribution.”

“Up to now all of these media were providing full support for the government,” explains Dr Cholakov. “In return for good media coverage, public procurement contracts (mainly EU funded) in the road construction and energy sectors were granted to companies close or indirectly controlled by the MRF.”

“This same political party is also widely believed to have control over the body that elects the chief prosecutor: the Supreme Judicial Council. So if or when PM Borissov falls depends a great deal on MRF. [Things could change] if it decides to turn its media against the government and if Mr Geshev – who it allegedly controls – opens investigations against people close to the premier,” adds Dr Cholakov.

At present, there are no signs that the MRF plans on changing sides, especially considering a proposed change in the electoral law which will favour the party. However, ex-TV presenter and populist Slavj Triffonov is gaining traction in the polls, and has stayed silent on the protests, and is a figure to watch if the elite come to see Mr Borissov as a dead end.

So while there is a chance the star of Mr Borissov may fade, Dr Cholakov believes that the protests will not. They currently have around 50-60 per cent support of the population, and this is only likely to increase once the Covid-19 economic downturn sets in.

For Ms Dimitrova, the protesters’ demands run deeper than the resignation of Mr Borissov or Mr Geshev, but go right to the root of the country, which she says, needs to become governed by a rule of law, which it currently is not.

“[In Bulgaria] there are rules and laws, and people who are inevitably always somehow above them. This needs to disappear. Think about the UK — you know the name of the PM, you know the name of your mayor, and that’s really more or less it,” she says. “I can name more Bulgarian political figures than my university professors. Why? When you keep hearing somebody’s name over and over again they must be doing something wrong, politically speaking.”

For a country suffering from brain drain and depopulation, a youth disillusioned with the political process is only set to accentuate matters further.

“As a young person, it feels helpless being in that country,” tells Ms Dimitrova.

Viktor Orbán’s latest victim: Budapest’s University for Theatre and Film
Covid-19 is a once in a lifetime opportunity for emerging Europe to develop better infrastructure
Comment