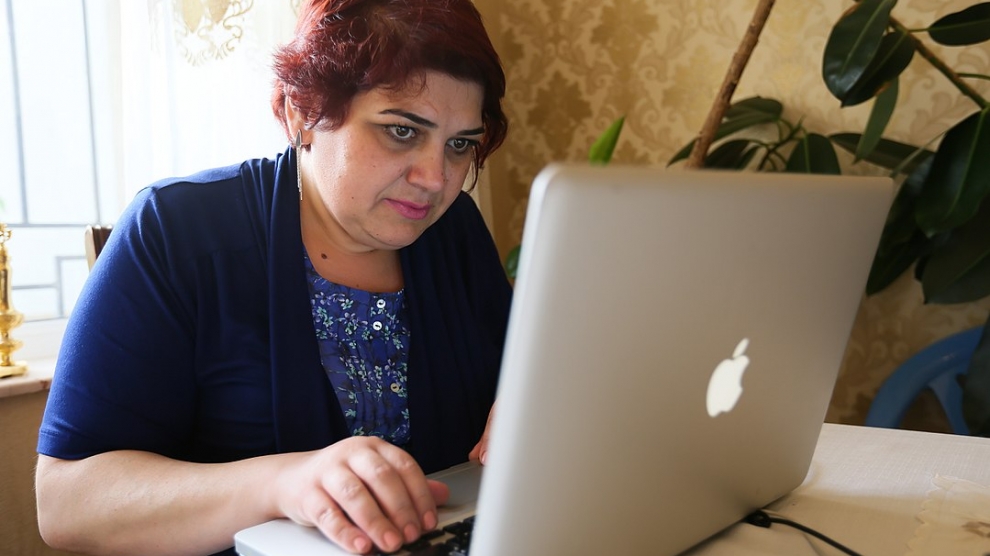 The European Court of Human Rights (ECHR) has made a third ruling in favour of Azeri investigative journalist Khadija Ismayilova (pictured above).

The Azerbaijani government has been ordered to pay 6,000 euros in compensation and legal costs for failing to protect Ismayilova’s right to a private life and reputation in relation to a widely publicised sex tape that was recorded without her knowledge.

Previously, the ECHR had ruled that the government violated her rights to privacy, freedom and expression by failing to investigate how the tape was made.

And in February, the court ruled that her seven and half year prison sentence for alleged tax evasion was unlawful, aimed at silencing her.

The ruling represents a new victory for the investigative journalist, who works for Radio Free Europe/Radio Liberty, who has been a thorn in the side of the Ilham Aliyev regime for more than a decade.

In 2009, Ismayilova helped Washington Post correspondent Andrew Higgins break a story about the president’s children owning expensive real-estate in Dubai. Since then, Ismayilova has been instrumental in uncovering several more examples of the corruption related to the president and his daughters.

In 2010, she revealed that Arzu Aliyeva was one of the owners of the Silk Way Bank. The bank was connected to a larger privatised company that had nearly-complete monopoly over all aspects of the airline business in Azerbaijan.

Later, in 2011, it was also revealed that the president’s daughters were the real owners of Azerfon, a telecommunications company. Before this story broke, it was thought the company was owned by Siemens – which was the official government position.

Ismayilova quickly drew the ire of the Azerbaijani elite, and in 2012 the sex tape – made without her knowledge – was put online.

But she didn’t back down.

She was not the first journalist to be defamed by the release of sex tapes. Two other journalists had previously been targeted in a similar way, with hidden cameras being put in homes and hotels.

However, this time, the publication of the sex tape backfired for the blackmailers and Ismayilova received wide support from the Azerbaijani public.

This, however, did not stop the government from arresting her in late 2014 on charges of tax evasion and “abuse of authority.”

Although Azerbaijan’s Supreme Court overturned her conviction in May 2015 and reduced her sentence to three years of probation, she is still subject to certain bans imposed on convicts – such as a travel ban which the Court of Appeals declined to lift in 2018.

Even though the ECHR has now ruled thrice in her favour, the victory is mostly moral.

Ilham Aliyev’s regime is known for obstructing ECHR rulings by paying out the compensations in small installments, and irregularly. The country has also never conducted any reforms with regards to ECHR rulings. Thanking her lawyers in a Facebook post, Ismayilova herself emphasised that the government has failed to implement the two previous ECHR rulings.

“That essentially means that the underlying routine human rights violations that are happening to people in Azerbaijan are not being remedied,” says George Stafford, co-director of the European Implementation Network, an NGO which lobbies for implementation of ECHR rulings.

Azerbaijan’s reputation for corruption and silencing journalists is well known. According to the 2020 World Press Freedom Index published by Reporters Without Borders (RSF), the country occupies 168th place of 180 nations.

“Not content with crushing all forms of pluralism, President Ilham Aliyev has been waging a relentless war against his remaining critics since 2014. Independent journalists and bloggers are jailed on absurd grounds if they do not first yield to harassment, blackmail or bribes,” the report states.

Amnesty International, which considered Ismayilova a prisoner of conscience, has reacted positively to the ECHR rulings.

“The European Court’s decision exposes the complicity of Azerbaijan’s judicial system in silencing a prominent journalist and attacking the right to freedom of expression in the country. Not only has Khadija Ismayilova served a prison sentence under false charges, she has suffered years of harassment by the authorities, intrusion into her personal life and vilification in state-run media,” says Natalia Nozadze, Amnesty International’s South Caucasus researcher.