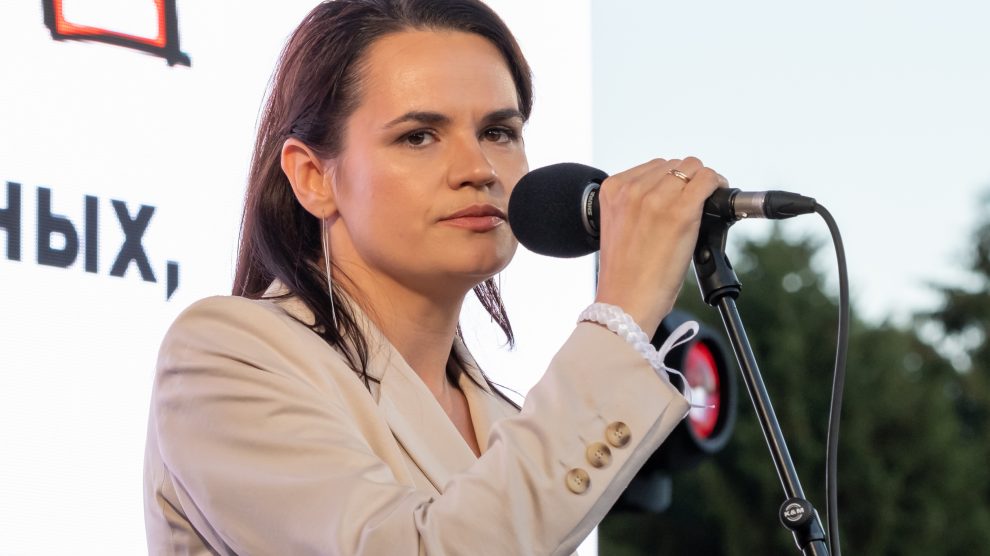 Belarus opposition leader Svetlana Tikhanovskaya (pictured above) was forced to leave the country on August 10, as part of deal with authorities to free her campaign manager Maria Moroz, detained on the eve of Sunday’s rigged presidential election.

Both women are now in Lithuania, a fact confirmed by Lithuania’s foreign minister, Linas Linkevicius. Mrs Tikhanovskaya’s children are also believed to be in Lithuania. They were smuggled out of Belarus following the arrest of their father, Sergei Tikhanovsky, in July. Mr Tikhanovsky remains in prison, one of an increasing number of political prisoners in Belarus. Before she left, Mrs Tikhanovskaya was forced to record a message calling on Belarusians to accept the official result of the election – which gave incumbent president Alexander Lukashenko more than 80 per cent of the vote – and to halt their protests.

Those protests had continued on August 10, with demonstrators again clashing with security forces across the country. At least one protester was killed. Mr Lukashenko’s continued use of force against his own people, and forcing Mrs Tikhanovskaya to record what looks much like a hostage video, underlines the fact that his claims of winning Sunday’s election are nonsensical.

Lithuania, besides offering a safe haven to Tikhanovskaya, has also been one of few western governments calling for the international community to offer more support to the Belarusian opposition.

“At this stage, the people of Belarus who want change in their country need the support of the international community and the European Union,” Nausėda said.

“The aspirations of the citizens of Belarus deserve adequate attention from the EU and western countries.”

The Polish MEP Robert Biedroń, who chairs the European Parliament’s Belarus delegation, said the EU needed to rethink its policy towards Belarus’s president of 26 years. “We should introduce sanctions on Belarusian officials responsible for grave violations of human rights and fundamental rights,” he said.

With the exception of Poland and Lithuania, however, the West has so far offered little constructive support beyond general condemnation of Mr Lukashenko’s violent repression of the protests and expressions of “deep concern”.

“The EU will be vigilant and ready to support the process of de-escalation and dialogue that would lead to democratisation and a closer, more intense EU-Belarus partnership,” said European Commission President Ursual von der Leyen, who added that she had spoken to Mr Morawiecki regarding his initiative but that no date had been set for any emergency summit, nor, indeed, if one would be held at all. It has been reported in the Polish press that EU officials are said to be irritated by “Poland’s attempt to pose as a defender of rule of law”.

The US president, Donald Trump, has yet to make any statement about the situation in the country, although his opponent in the forthcoming presidential election, Joe Biden, has called for a transparent and accurate vote count in Belarus, the release of all political prisoners, for Mr Lukashenko to respect the right to protest and for the violence to end. “After a presidential election marred by electoral fraud, citizens peacefully protesting to demand an accurate vote count are now being met with riot police using stun grenades, tear gas, and rubber bullets,” he said.

“The Lukashenko regime has cut internet access, arrested protesters and independent journalists, and tried to muzzle foreign observers. These are not the actions of a political leader confident that he has won a fairly conducted election.”

US Secretary of State Mike Pompeo meanwhile said: “We strongly condemn ongoing violence against protesters and the detention of opposition supporters, as well as the use of internet shutdowns to hinder the ability of the Belarusian people to share information about the election and the demonstrations.”

In a statement, the United Kingdom’s Foreign and Commonwealth Minister James Duddridge called on the government of Belarus to refrain from further acts of violence following the seriously flawed elections.

“The violence and the attempts by Belarusian authorities to suppress protests are completely unacceptable,” said Mr Duddridge. “There has been a lack of transparency throughout the electoral process in addition to the imprisonment of opposition candidates, journalists and peaceful protestors. We are deeply concerned that Belarus’ failure to issue a timely invitation prevented the Organisation for Security and Co-operation in Europe and the Council of Europe from observing the electoral process.”

There was disappointment in some circles however that the statement came from Mr Duddridge, a junior minister, and not from Dominic Raab, the foreign secretary, or from the prime minister Boris Johnson.

More of the same came from the United Nations, where spokesperson Stéphane Dujarric said Secretary-General António Guterres wasfollow the situation “with great concern”.

Mr Guterres has urged all relevant parties to avoid actions that would further enflame tensions, and to approach the issues in the spirit of dialogue.

“The Secretary-General calls on the Belarusian authorities to show maximum restraint and to ensure full respect for the rights of freedom of expression, peaceful assembly and association,” Mr Dujarric told journalists.

Such statements of “concern” did not impressed Estonia’s forthright former president Toomas Hendrik Ilves. “Such statements will do nothing,” he said. “Time to suspend all EU activities in Belarus that do not directly help its citizens and to sanction all decision-makers in the Lukashenko regime.”

Mr Lukashenko has not been without support, either.

The leaders of China and several former Soviet nations, including Russia, have sent messages of congratulation. Most surprising was the fawning statement from Armenian Prime Minister Nikol Pashinyan, who took office himself in 2018 after he led street protests, dubbed the Velvet Revolution, which ousted the country’s autocratic ruler Serzh Sargsyan.

“Dear Alexander Grigoryevich, Congratulations on your being re-elected as President of the Republic of Belarus,” wrote Mr Pashinyan in a letter published on his website. “I avail myself of this opportunity to wish you robust health, as well as peace and prosperity.”

President of neighbouring Azerbaijan, Ilham Aliyev, was also fulsome in his praise of what he called Lukashenko’s “confident victory”.

“I wish wished you success in your activity for the prosperity of the people of Belarus and the country’s development,” said Mr Aliyev.

New protests in Belarus are expected this evening, and opposition activists have called for a general strike to begin at 12pm. On August 10, workers at one of the country’s largest firms, state-owned Belarusian Steel Works (BMZ) in the southeastern region of Gomel briefly downed tools before returning to work. BMZ employs 11,000 people, and is one of the country’s main sources of exports.