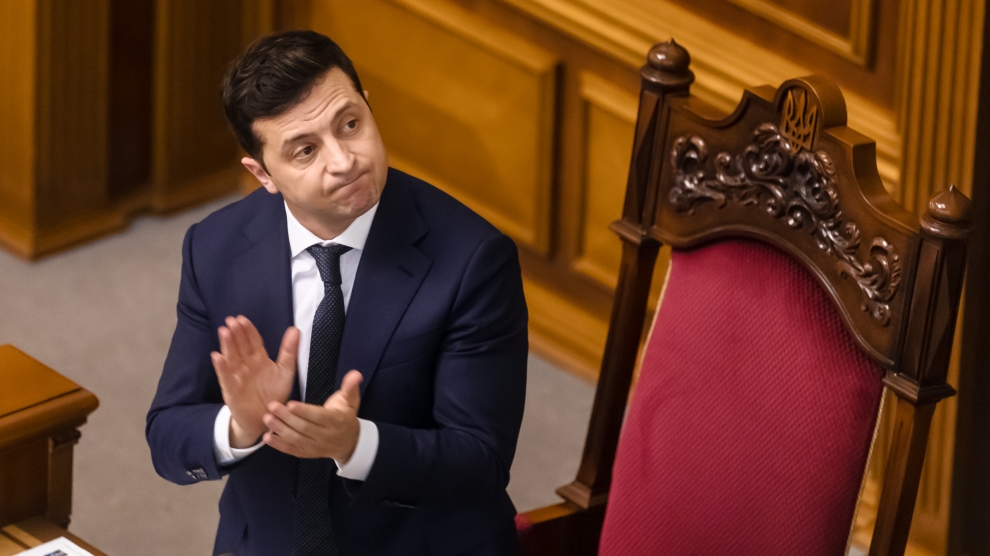 Top of the agenda was Ukraine’s economic performance since the signing of an Association Agreement with the EU in 2014 and the establishment of the Deep and Comprehensive Free Trade Area (DCFTA).

The Association Agreement has been described as the most ambitious and comprehensive agreement the EU has made with any third country. Yet the deal was contingent on Ukraine making visible reforms in economic policy and legislation. In return, the EU promised financial aid, access to the EU’s single market, and a number of other economic advantages.

The September 2014 agreement was the culmination of Ukraine’s years-long efforts to move away from the Russian sphere of influence and closer to the European Union. This achievement would have not been possible without hundreds of thousands of Ukrainians calling for closer ties with the EU earlier in 2014, in what is now known as the Euromaidan Revolution. Anti-Euromaidan protests followed in Ukraine’s Russian-majority eastern regions, which eventually led to war between Russia-backed rebels and the Ukrainian army. The region remains under Russian occupation to this day, as does Crimea.

As a result of the dramatic events of 2014, Ukraine’s economy suffered a dramatic drop in output. According to the World Bank, the country’s GDP fell by 6.6 per cent in 2014 followed by a 9.8 per cent drop in 2015. This can partly be explained by a blockade on Ukrainian exports introduced by Russia, Ukraine’s single biggest trading partner at the time, while the annexation of Crimea seized four per cent of the country’s GDP.

Nonetheless, Ukraine was able to mitigate the crisis by introducing a number of economic reforms to boost investment and economic growth. These were partially included in the conditionality of the Association Agreement with the EU, but some went even further. With the assistance of an initial 17.01 billion-US dollar loan from the International Monetary Fund, Ukraine was to focus on improving exchange rate flexibility, banking stability, fiscal policy, energy policy, and governance.

Since then, there has been partial progress, not least in the banking sector. In July of this year, IMF Managing Director Kristalina Georgieva asserted that “the reform of the National Bank of Ukraine (NBU) and its performance over the past five years is a clear success story for Ukraine. The credible policy actions of the NBU have been instrumental in stabilizing the economy. The successful clean-up of the financial sector – which was ravaged by fraud – is also credit to the supervisory work of the NBU.”

However, in a staff report from this June, the IMF also acknowledges that: “Ukraine’s track record in macro-stabilisation over the last five years and under successive Fund programmes has been strong, but the goal of robust and inclusive growth remains elusive in the absence of sustained and comprehensive structural reform. The outbreak of the Covid-19 pandemic has significantly worsened the outlook and has refocused government policies on containment and stabilisation.”

Since the full enrollment of the Association Agreement in 2017, trade with the EU has increased by 65 per cent reaching 43.3 billion euros in 2019, and the bloc has overtaken Russia as Ukraine’s largest trading partner.

It is clear, however, that for this economic relationship to go even further there is now a need for a more holistic transformation of Ukraine’s governance, including improving the rule of law and doing more to tackle corruption.

Reflecting on the high-level meeting with Ukrainian leaders last week, the Mr Borrell noted: “According to many observers, the pace of reforms has slowed down recently, including on the implementation of Association Agreement commitments. The government reshuffle in early March and the dismissals of reformist figures sent worrying signals over the readiness to resist vested interests.”

President Zelensky will next week visit Brussels for the 22nd annual EU-Ukraine Summit, and backsliding on anti-corruption measures is expected to be discussed. There has for some time been much doubt over his commitment to clamping down on corruption (a key promise of his election campaign last year), doubts which have not been helped by a chain of recent events, including a ruling by the country’s constitutional court earlier this month that the National Anti-Corruption Bureau of Ukraine (NABU) – established in the wake of the 2014 Association Agreement – is unconstitutional. It is feared that this could open the way for parliament to take control of NABU.

Another incidence that has put the independence of Ukraine’s justice system under the spotlight was the ruling this month by a district court that state-run PrivatBank should pay compensation of 350 million US dollars to companies belonging to oligarchs Hryhoriy and Ihor Surkis, the bank’s former owners.

Ukraine’s central bank pronounced PrivatBank insolvent in 2016 and wrote off the assets of its owners and related firms to cover the lender’s capital gap. It said PrivatBank was nationalised because shady lending practices had pushed it toward insolvency.

Contrasts have been made between the 2014 Euromaidan uprising in Ukraine and the ongoing pro-democracy protests in Belarus, with Ukraine’s reforms since the installment of a pro-European government seen as largely positive.

While both the IMF and the EU foreign policy chief’s recent visit to Kyiv reinforce this idea, both acknowledge that transparency issues continue to prevent real and full modernisation of Ukraine’s economy.

The upcoming annual EU-Ukraine Summit comes at a time of heightened internal criticism of Mr Zelensky’s government. He is likely to be told that the only way further integration with the EU will be possible is if Kyiv upholds and implements all of the terms and conditions it signed up to in 2014.