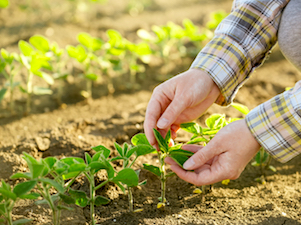 The European Investment Bank (EIB), the EU’s long-term nonprofit lending organisation, has launched the Agri-Food Value Chain Project backed by a loan of up to 400 million euros and donor-backed technical assistance with the aim of supporting small- and medium-sized enterprises (SMEs) and mid-caps in Ukraine.

The EIB’s programme is intended to help Ukraine benefit from the opportunities offered by the Deep and Comprehensive Free Trade Area (DCFTA) established under the country’s Association Agreement with the European Union.

Speaking at the launch event of the project, Marion Hoenicke, head of division at the EIB’s neighbouring countries department, said that the Ukrainian agri-food sector had enormous growth potential due to its long tradition and competitive advantages. “With the support of the European Union as well as the United Kingdom through the Eastern Partnership Technical Assistance Trust Fund (EPTATF), the EIB is stepping up its efforts to improve access to finance and build capacity in order to support sustainable and inclusive growth in Ukraine,” she told the audience.

According to the EU Bank, the funds will provide long-term financial support for productive investments made by SMEs and mid-caps, as well as public service providers, along the entire value chain. Potential beneficiaries include input suppliers, farmers, processors, storage and logistics operators, testing laboratories, research and education institutions, as well as extension services that contribute to the functioning of the target value chains.

The EIB’s new programme targets the cereals, oil seeds and aquaculture/fisheries value chains as they have been identified as “being the best placed to satisfy domestic demand for quality produce and to increase the competitiveness of the sector and its exports to the EU and global markets.”

The EIB loan is further supported by the EU and the United Kingdom through a combined grant of 5.5 million euros for technical assistance services.

Based in Kyiv, the technical assistance project team – led by the Danish consulting firm NIRAS – will work to provide support and advice to intermediary banks, and also directly to beneficiary SMEs on investment planning and credit applications.