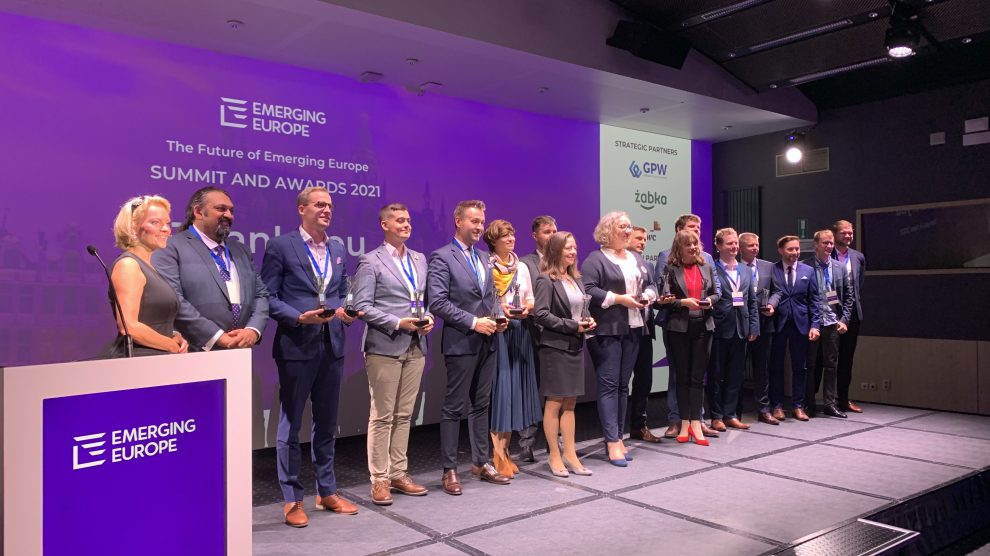 Individuals, businesses and organisations from across Central and Eastern Europe saw their work recognised at Emerging Europe’s fourth annual awards ceremony, held on September 15 in Brussels.

The work of more than 60 NGOs, businesses and individuals from across Central and Eastern Europe was recognised in Brussels on September 15 at the 2021 Emerging Europe Awards, the fourth edition of a programme that highlights best practice, innovation and courage across the region.

Winners, split across Emerging Europe’s five pillars, based on the United Nations Sustainable Development Goals (People, Planet, Prosperity, Partnership, Peace), were for the first time chosen by the global Emerging Europe community: in all more than 8,000 votes were cast for the various nominees.

The awards were handed out by the BBC’s Kasia Madera.

“Our awards have always meant a lot to their winners, but I think that this year, knowing that they have been chosen by our community makes them just that bit more special,” said Andrew Wrobel, founder of Emerging Europe.

Among the winners in the People pillar was Youth Cancer Europe, a community led by young cancer patients and survivors, working to improve the lives of those diagnosed with the disease, chosen as the Health and Social Care Initiative of the Year.

“We are based in Romania but active all over Europe,” said Victor Girbu of Youth Cancer Europe. “We believe that everyone has a right to cancer treatment.”

Also honoured was AsperIT, a Wrocław-based organisation which trains people with Asperger’s to work in IT, winner of Emerging Europe’s Young Empowerment Initiative of the Year.

Meanwhile, The Coding School for Women, a Georgian NGO teaching coding to women and girls, was named Future-Proof Education Initiative of the Year, and Serbian artist Andrej Josifovski won the Artistic Achievement Award for Save Our Home, a portrait made from 4,000 plastic bottles in order to mark World Rivers Day.

In the Planet pillar, Respect Energy the only company in Poland that obtains and sells energy exclusively from renewable sources, won the Green Energy Initiative Award, while Slovenian NGO Ekologi Brez Meja (Ecologists Without Borders) took the Sustainable Lifestyles gong.

The People-First Economy Award, one of six Prosperity categories, went to The East Europe Foundation, a Ukrainian NGO also active in Belarus and Moldova which invests in local initiatives to develop private entrepreneurship, public policy and civil society.

Other winners included Sygic, an automotive navigation system from Slovakia making travel more sustainable, which was named Emerging Europe’s Global Champion of the Year, and Social Impact Award, which runs education and incubation programs in more than 15 countries in Europe, Africa and Asia to support early-stage social entrepreneurs.

French energy firm Eurocape meanwhile was the region’s Foreign Investor of the Year, recognition for its efforts to provide clean, cheap energy to more than 200,000 homes in Ukraine through its Zaporizhia wind park.

The Estonian Investment Agency won Investment Promotion Agency of the Year – for the second year in a row – while Łódź was named Business Friendly City of the Year: two categories whose winners were decided by Emerging Europe’s empirical research.

In the Partnership pillar, EIT Health’s Regional Innovation Scheme won the Regional Collaboration Initiative of the Year Award, with the Polish Code of Conduct in Healthcare taking the Modern and Future-proof Policymaking Initiative Award.

In the Peace pillar, the award for Democracy, Human Rights and the Rule of Law Initiative of the Year went to the All-Poland Women’s Strike, which has led a campaign against Poland’s increasingly restrictive anti-abortion laws, while Belarusian news outlet NEXTA won the Media Freedom and Responsible Reporting Award.

“The fight goes on,” said Marta Lempart of All-Poland Women’s Strike. “The women of Argentina fought for 15 years to legalise abortion. We are ready to do the same.”

A number of individual awards were also handed out, with the Belarus opposition again to the fore.

Svetlana Tikhanovskaya, the de facto leader of the country’s opposition movement, was named Emerging Europe’s Public Figure of Year, recognition for her tireless efforts to keep the country’s fight for freedom and democracy in the international public eye since a rigged presidential election in August 2020.

Although the Belarusian dictator Alexander Lukashenko claimed to have won the election with an implausible 80 per cent of the vote, Tikhanovskaya was by any objective measure almost certainly the actual winner.

“I am extremely honoured and humbled to receive the Public Figure of the Year Award,” said Tikhanovskaya, who was forced into exile shortly after the election.

“When I joined the presidential campaign in the summer of 2020, I was frightened but I wanted to help,” added Tikhanovskaya, who dedicated the award to her husband, Sergei Tikhanovsky, who remains in prison in Belarus.

“Together we have shown the world what power participatory democracy can unleash. My only role as a leader is to listen to people, to make their voices heard and to harness the power of collective intelligence.”

VISA’s Vera Platonova was another winner – of the Female Business Leader of the Year Award – for her ongoing support for women entrepreneurs across the region.

Edita Velić, one of Bosnia and Herzegovina’s youngest politicians, was meanwhile voted Young Influencer of the Year for her campaign to encourage young women to get involved in her country’s male-dominated political environment.

Finally, two leading figures from the world of international finance and medical science were named as the winners of Emerging Europe’s Professor Günter Verheugen and Princess Marina Sturdza awards for 2021.

The Professor Günter Verheugen Award, given to eminent individuals from outside emerging Europe who have contributed to the region’s prosperity and peace, has this year been given to Sir Suma Chakrabarti, former boss of the European Bank for Reconstruction and Development (EBRD), while the Princess Marina Sturdza Award, given to eminent individuals the region who have contributed to its prosperity, science, culture and peace, goes to Professor Katalin Karikó, whose work formed the basis of the Covid-19 vaccine.

Artistic Achievement: Save our Home

Modern and Future-proof Policymaking: Polish Code of Conduct in Healthcare