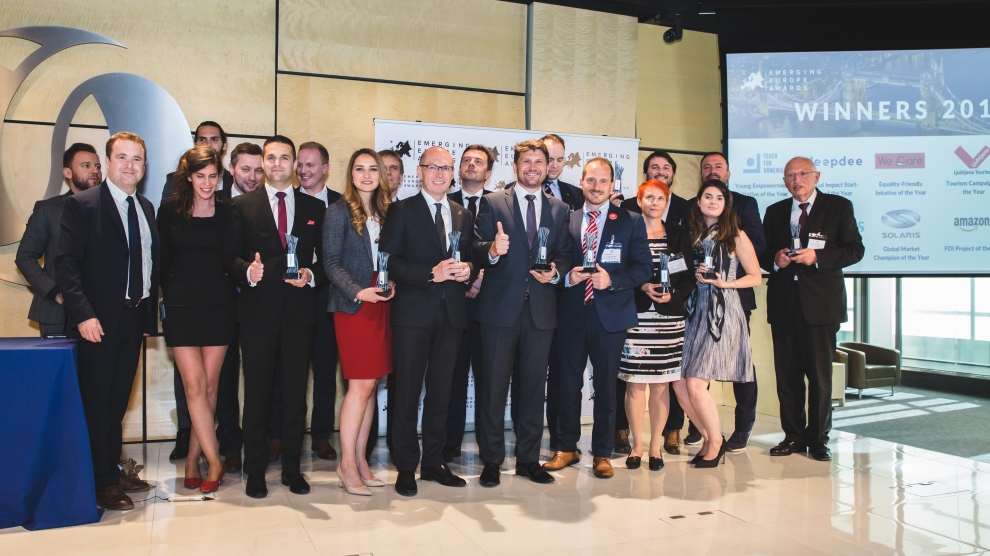 Invest Lithuania has been named as the best Investment Promotion Agency (IPA) in central and eastern Europe at the inaugural Emerging Europe Awards, held on June 22 at the headquarters of the European Bank of Reconstruction and Development (EBRD) in London.

“Last year we managed to attract more than 40 direct investment projects to Lithuania,” said Arturas Rtiscev, Invest Lithuania’s head of business development in the UK, when accepting the award.

The prize for City FDI Promotion Strategy of the Year went to Wroclaw in Poland, with Plečnik’s Ljubljana in Slovenia being named Tourism Campaign of the Year. Siemens Czech Republic won in the Research and Development Category, while Solaris,  the Polish producer of city, intercity and special-purpose buses and low-floor trams was chosen as Emerging Europe’s Global Champion of the Year.

“It’s down to one per cent inspiration, 99 per cent hard work,” said Dariusz Michalak, deputy CEO of Solaris during his acceptance speech.

Other winners at the awards ceremony included Amazon, the FDI Project of the Year, and the City of Tirana, which won Best Urban Renewal Project for its renovation of the New Bazaar.

“The bazaar has made a huge change to the city, giving life to more than 200 businesses. It has made noises beyond Albania,” said Tirana’s deputy mayor Arber Mazniku, who accepted the award.

In the social categories, there were popular wins for some incredibly innovative programmes.

Teach for Armenia, which addresses educational inequality in Armenia by organising passionate people to spend two years teaching in rural communities throughout the country, was named Young Empowerment Initiative of the Year.

“This is a huge honour,” said Larisa Hovannisian, the organisation’s founder. “I’ve come as one but I’m here on behalf of tens of thousands.”

Deepdee, a start-up from Belarus specialising in the development of advanced software solutions for the healthcare industry was given the Social Impact Start-Up of the Year Award, and the WeCare/MenCare initiative from Georgia – which aims to break the stereotype that family, its health and well being is a woman’s responsibility – was named Equality-Friendly Initiative of the Year.

There was also a Lifetime Achievement Award for Günter Verheugen, the former European Commissioner for Enlargement who did so much to bring about the eastern expansion of the European Union during his term in office.

“I will continue to work, and while and I’m not in a position to make decisions anymore, a couple of weeks ago I became aware that there is now a new position, called influencer.”

“I see myself as an influencer for the future of Europe.”