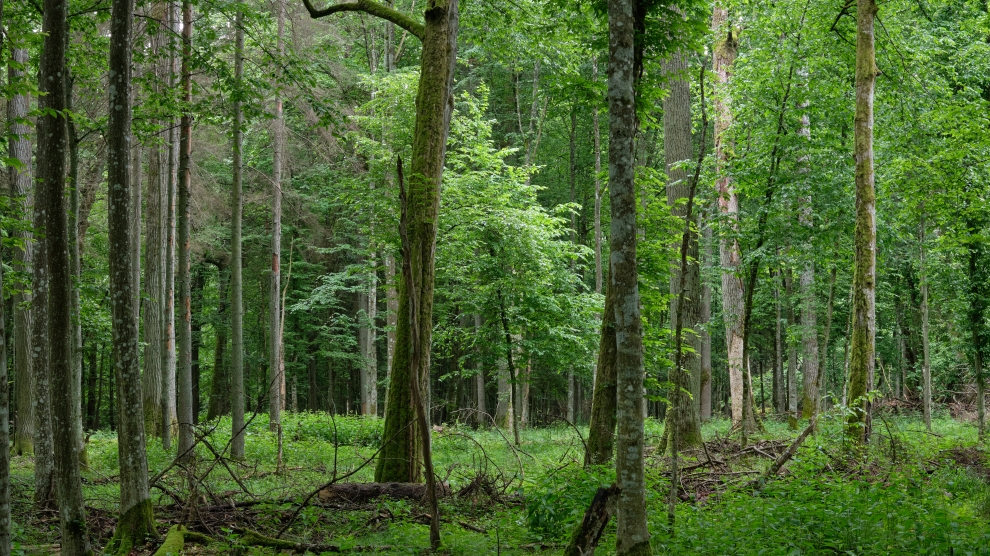 Several countries in emerging Europe are home to vast swaths of primeval forests, areas brimming with trees which have attained a great age without significant disturbance from human activity. In particular, Poland and Romania both remain home to immense forests that were once part of a single woodland that covered most of the European Plain.

In recent decades however, these forests – which are hotspots for biodiversity – have come under threat from commercial logging, both of the legal and illegal kind. Environmental activists warn that this logging, should it continue unchecked, will have dire consequences for flora, fauna, and for the climate.

“Logging of these forests would destroy many valuable habitats and lead to a massive decline in many species and ecosystems and biodiversity as such,” says Janinka Lutze of the Germany-based environmental NGO EuroNatur.

Yet despite this ecological importance, and despite many parts of forests being protected by such initiatives as the European Union’s Natura 2000 project, governments and the private sector are hesitant to put a stop to logging in these areas. Quite simply, it’s big business. According to data from Eurostat, in 2017 the total output of forestry and logging in Poland was more than five billion euros and the sector employed 52,700 people.

Environmentalists in emerging Europe have long warned about the dangers of logging in old growth or primeval forests, but a watershed moment for the movement happened in April 2018, when the European Court of Justice declared that increased logging in Poland’s Białowieża Forest had violated EU law.

In 2016, the Polish ministry of environment decided to increase logging in the protected forest. Being one of the last and largest remnants of the primeval forest that stretched across the European Plain, it is protected by the EU’s Habitats Directive and is a part of Natura 2000, the largest coordinated network of protected environments in the world. Białowieża is not just home to very old trees, however. European buffalo, one of just two extant species in the world, roam the forest and it is also a home to some of Europe’s most endangered species such as the three-toed woodpecker.

As justification for the logging, the ministry said that the forest was infested with bark beetles. Bark beetles reproduce in the inner bark of trees, eventually killing them. However, the beetles are attracted mostly to already dying and weakened trees.

In the case of Białowieża, most scientists agree that nature should be allowed to take its own course and that there is no scientific proof that felling the affected trees would actually help.

Nevertheless, the ministry pressed on despite scientific warnings, protests from environmentalists, and even a petition signed by 120,000 Poles. In the end, ClientEarth, an international environmental law charity with offices in Warsaw, along with other organisations, lodged a complaint with the European Commission which would eventually force Poland to halt the logging, but only after the European Court of Justice threatened to impose a 100,000 euro daily fine.

This huge victory for environmentalists seemed short-lived by 2019 when Poland’s state-owned logging company started talking about issuing new permits after loggers quickly used up quotas which were meant to last until 2021. Thanks to increased pressure from the public and organisations such as ClientEarth, these plans did not come to pass.

ClientEarth tells Emerging Europe that the situation in Białowieża has been “stable” over the past year.

“The return of the harvesters would violate the ruling of the European Court of Justice, which keeps serving as a protective shield for the forest and needs to be taken into account by every entity involved in the management of this precious ecosystem,” says Agata Szafraniuk of ClientEarth.

Still, the battle to protect Białowieża is far from over. State Forests, the governmental organisation that manages state-owned forests, is now developing a new forest management plan that will shape the forest’s future in the next decade. ClientEarth says these plans are a legal obligation and don’t necessarily pose a threat, and they are actively involved in their development.

Another threat to Białowieża could potentially come from Covid-19. Like many other sectors, forestry was hit by the economic consequences of the pandemic as the volume of raw materials bought from State Forests dropped. This has led the ministry of environment to prepare an amendment to Poland’s Act on Renewable Energy Sources which would allow State Forests to sell so called “low-quality wood” to the energy sector. Many NGOs and environmentalists have expressed concerns that while these trees might have low value from a logging perspective they are nevertheless extremely valuable from the standpoint of biodiversity conservation as they are home to many insects, birds, lichens, and fungi. There is however, no confirmation that this new legislation will affect Białowieża.

While the Polish primeval forest seems relatively safe, at least for now, the same cannot be said for forests in Romania. Romanian old growth forests, also protected by Natura 2000 have been threatened for years by logging — both legal and illegal.

Romania hosts two-thirds of the remaining primeval forests in Europe found in the temperate climate zone, but they are being systematically destroyed in large-scale logging operations while the Romanian authorities seem uninterested in the ecological and environmental implications.

“In Romania there is probably a complex and corrupted system behind all the illegal logging with many people involved, powerful people in the back and corruption on many little points in that system,” says Ms Lutze. “Apparently influential people benefit from illegal logging and therefore it is challenging to make a systematic change, which is required to resolve the issue.”

While a systematic change may not be on the horizon anytime soon, EuroNatur, ClientEarth, and other NGOs filed a complaint with the European Commission in September 2019, mirroring the events around the logging in Białowieża. The European Commission has since begun infringement proceedings against the country.

According to the NGOs, the Romanian state forestry management company, Romsilva, has long carried out logging in protected primeval forests. In February of this year and then again in July, the European Commission issued reasoned opinions concerning the logging, giving Romania a chance to address the problem.

Legal logging is a problem itself, but Romanian forests are also endangered by illegal logging operators. In their reasoned opinion published in July, the European Commission notes that inconsistencies in national legislation don’t allow the Romanian authorities to check large amounts of timber.

Additionally, there is the problem of whitewashing illegal logging through legal collection points where the illegally obtained timber is mixed in with legally obtained material.

“We expect that Romania comprehensively stops logging in Natura 2000 sites and complies with European legislation such as the Habitats and the Birds Directive and the EUTR (European Timer Regulation). In order to do so systematic change is required. If not, we expect that the European Commission will bring Romania to the European Court of Justice as was done in the case of Białowieża in Poland,” Ms Lutze says.

Yet the logging continues. To stop it, one solution for the future involves paying compensation to private forest owners who don’t cut down old growth wood. According to Ms Lutze, this is already happening, but only to a small extent.

“How such compensation schemes should look requires careful consideration. Eventually, the best solution is that states will purchase these valuable forests and designate them as protected areas without any intervention,” she explains.

However, the impact of this possible solution might be limited when it comes to illegal logging. Despite campaigns by environmentalists and even a government investigation launched in July, illegal logging remains a major issue.

Without a clear systematic solution in sight, the European Court of Justice could very well be the next battleground for the salvation of Romania’s, and Europe’s, last old growth forests.