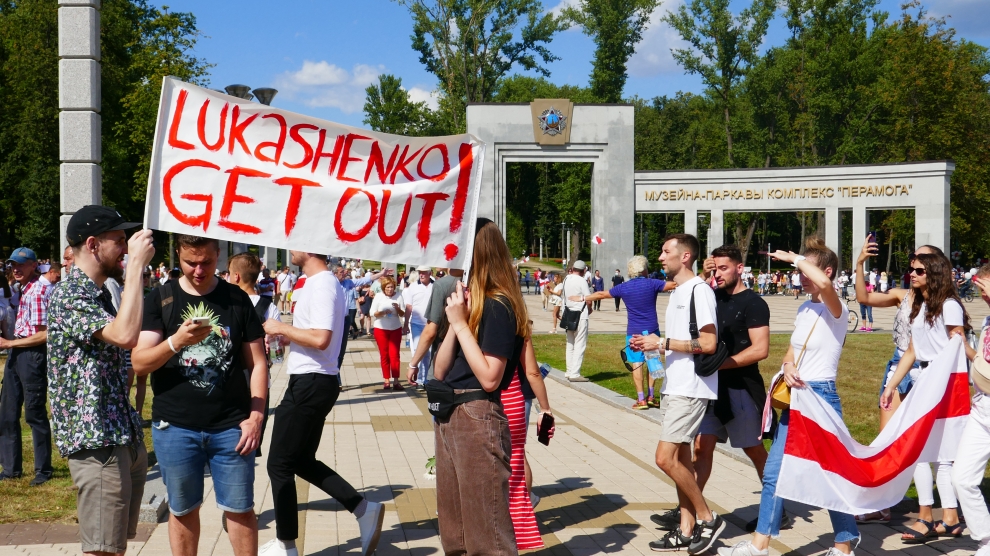 There were new protests in Belarus on September 23 following the abrupt and unannounced swearing-in of Alexander Lukashenko for a new term in office as the country’s president, despite having in all probability been defeated in a presidential election on August 9.

While country’s electoral commission claims that Mr Lukashenko won more than 80 per cent of the vote in the election, the country’s main opposition candidate, Svetlana Tikhanovskaya, is believed by independent analysts and observers to have been the real victor.

The controversy surrounding the rigged election triggered weeks of mass protests across the country, in which thousands of people have been arrested and then tortured while in police custody. Mrs Tikhanovskaya has been forced into exile, in Lithuania, while her campaign manager Maria Kalesnikava has been arrested and charged with attempting to stage a coup d’etat.

Mr Lukashenko’s inauguration ceremonies are usually publicised well in advance and presented as major state occasions. This time, there was no publicity, merely a short bulletin from state news agency Belta reporting: “Alexander Lukashenko has taken office as President of Belarus. The inauguration ceremony is taking place in these minutes in the Palace of Independence.”

Belta added that Mr Lukashenko had made a short speech in which he said that “Belarus needs security and consensus, on the brink of a global crisis. I cannot, I have no right to abandon the Belarusians.”

Mrs Tikhanovskaya said that Lukashenko was now an illegitimate president.

“Starting from this very day, he is neither a legal nor a legitimate head of Belarus,” she said in a statement.

Fellow opposition politician Pavel Latushko, a former minister of culture, posted on social media: “Where are the jubilant citizens? Where is the diplomatic corps? It is obvious that Alexander Lukashenko is exclusively the president of the Omon (riot police) and a handful of lying officials.”

The European Union, still dithering over the implementation of sanctions against the Belarusian regime, has been equally critical of Mr Lukashenko’s swearing-in.

“This so-called ‘inauguration’ and the new mandate claimed by Alexander Lukashenko lack any democratic legitimacy,” the EU’s 27 states said in a joint statement. “This ‘inauguration’ directly contradicts the will of large parts of the Belarusian population, as expressed in numerous, unprecedented and peaceful protests since the elections, and serves to only further deepen the political crisis in Belarus.”

The EU’s foreign policy chief, Josep Borrell, said that Belarusian citizens deserve the right to be represented by those they freely choose through “new inclusive, transparent and credible elections”.

The EU, a large financial donor to Belarus, has also said it is “reviewing” its relationship with the country, which could mean that it will seek cut off direct funding to Mr Lukashenko’s government, channelling it to aid groups and hospitals instead.

Before the election, the EU had committed to spend 135 million euros on projects in Belarus and has also pledged 53 million euros for the fight against the Covid-19 pandemic.

Earlier this week, Mrs Tikhanovskaya discussed with EU foreign ministers in Brussels how to bypass the state administration to support doctors and hospitals.

“I asked Europe not to support financially the regime. All the money Mr. Lukashenko can get now will not go to support the Belarusian people but will go for those repressions,” she told reporters, referring to the crackdown against protesters.

Economic integration with the EU is key to the future of the Western Balkans
Bulgaria could be an attractive destination for refugees from the Middle East. Xenophobia means it isn’t
Comment