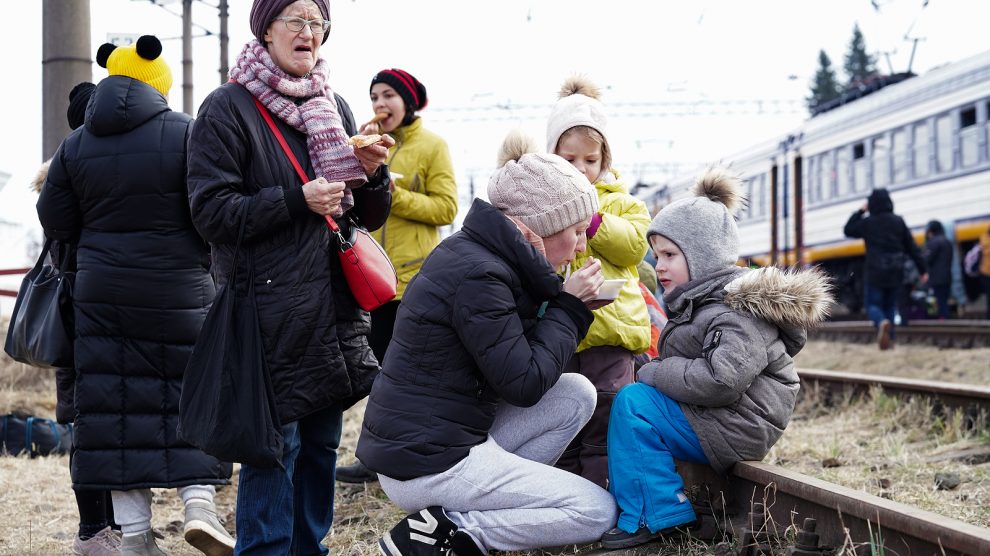 The number of people fleeing Ukraine to escape Russia’s invasion has passed five million in Europe’s worst refugee crisis since the end of World War II, the UN refugee agency said on Wednesday.

Russia’s invasion has triggered a massive displacement of people in the nearly eight weeks since it began, including more than seven million Ukrainians within the country. UN data showed that 5.03 million had fled Ukraine as of Wednesday.

Most have crossed to the European Union through border points in Poland, Slovakia, Hungary, Moldova, and Romania where volunteers and governments have scrambled to help the mostly women and children refugees find jobs, accommodation and to provide them support.

An additional 500,000 Ukrainian citizens have been forcibly deported to the Russian Federation, Mykyta Poturayev, the head of the Ukrainian parliament’s humanitarian committee, this week told members of the European Parliament.

In Mariupol, the besieged port city on the Sea of Azov, about 2,000 Ukrainian fighters are holding out in the Azovstal metallurgical plant. The Russian president, Vladimir Putin, has ordered the plant to be blockaded, but on Thursday cancelled plans to storm it.

Ukraine meanwhile has said that it is ready to resolve the issue of unblocking Mariupol and evacuating civilians through diplomacy and has proposed to hold a “special round” of negotiations with Russia in the besieged city.

According to the UK defence ministry, Russian forces are advancing towards the eastern Ukrainian city of Kramatorsk as Putin looks for “significant successes” ahead of Victory Day celebrations.

“Russia likely desires to demonstrate significant successes ahead of their annual May 9 Victory Day celebrations. This could affect how quickly and forcefully they attempt to conduct operations in the run-up to this date,” the ministry said in its latest intelligence report.

US President Joe Biden this week announced plans to send additional military aid to help Ukraine fight back against the Russian invasion, although the US defence department retracted its claim that Ukraine had been supplied with more aircraft, instead saying only parts had been delivered to enable Kyiv to put more jets into action.

Slovenian Prime Minister Janez Janša is running neck-and-neck in opinion polls before Sunday’s elections with an opposition party that has vowed to oust him from power and reverse policies they say undermine democracy and the rule of law. Janša is in a too-close-to-call race against the upstart Freedom Movement led by Robert Golob, the former head of state-owned energy utility Gen-I. Janša’s Slovenian Democratic party, known as SDS, was leading with 22.1 per cent in a voter survey from Ninamedia published Wednesday by the Dnevnik newspaper, just was 1.8 percentage points ahead of Freedom Movement.

A US Senate delegation visiting Belgrade has urged Serbia to join Western democracies in backing sanctions against Russia for its invasion of Ukraine. The three-member delegation met Serbian President Aleksandar Vučić on Tuesday and stressed that Serbia must harmonise its foreign policy with that of the European Union. “We understand Serbia has a long cultural and economic history with Russia,” said Senator Chris Murphy (Democrat-Connecticut) after meeting with Vučić. “But this is a moment where there is great risk if we, as a democratic community, don’t send a united message about the consequences of Russia’s behaviour in Ukraine.”

Four people died and more may be missing following an explosion at Pniowek mine in southern Poland operated by Europe’s largest coking coal producer JSW. As many as 42 miners were present in the section of the mine where the accident occurred at 12:15 am. local time, the company said on Wednesday, and 21 are being treated in hospitals.

The former long-serving head of Montenegro’s top court has been arrested for allegedly helping cover up her son’s drug-smuggling operation, local media in the Balkan country reported on Monday. Vesna Medenica, who was the head of Montenegro’s Supreme Court for 17 years, was arrested late on Sunday at the airport in the capital, Podgorica, according to state TVCG television. The report said Medenica’s son, Milos, has been accused of cigarette and drug smuggling after Europol – the European Union’s law enforcement agency – sent transcripts implicating him and also his mother.

Moldova’s president called on Tuesday for people and opposition politicians to refrain from using Russian symbols during May 9 celebrations to mark victory in World War Two because Russian troops were killing civilians in Ukraine. “It is impossible to combine in the same symbol the memory of lives given for peace and the current inhumane war,” President Maia Sandu told a briefing.

Russia said on Tuesday it has suspended its financing of the Office of the High Representative to Bosnia, a body set up to help the war-ravaged Balkan country establish political stability, because Moscow regards the current envoy to be illegally appointed. The Office of the High Representative (OHR) was established as part of the Dayton peace accords that ended Bosnia’s 1992-95 war. OHR’s role was to oversee reconstruction and peace implementation in a country torn apart by the ethnic conflict in which 100,000 died.

Uzbekistan has rejected claims by a regional affiliate of Islamic State that it carried out a rocket attack on the Central Asian nation from neighbouring Afghanistan. The Islamic State-Khorasan (IS-K) said on Monday that it had fired 10 rockets at an Uzbek military base in the border town of Termiz, according to SITE Intelligence Group, which tracks terrorist propaganda. But Uzbek presidential spokesman Sherzod Asadov denied the claim on Tuesday, calling on Uzbek citizens to disregard what he called “provocations.”